Rebuilding the food pyramid for 2010 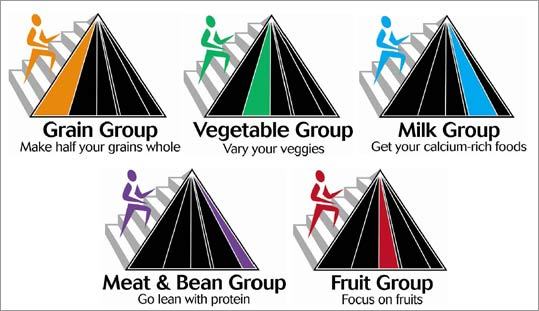 Five years ago, Greek-style yogurt wasn’t in the dairy case and acai was an obscure Amazon berry. That was 2005, the last time the United States revised the Dietary Guidelines for Americans and its visual emissary, the food pyramid.

In the world of nutrition research, five years is a lifetime. New studies make headlines each day and consumer appetites are increasing for simple, reliable guidance. “People are definitely interested in nutrition and choosing better foods for their families and for themselves. There’s a lot of awareness about it,’’ says Nancy L. Cohen, head of the Department of Nutrition at University of Massachusetts Amherst.

This month, the federal departments of Agriculture and Health and Human Services will release the 2010 dietary guidelines, updated every five years since 1980. The guidelines directly impact the eating habits of one in every four Americans whose meals are subsidized by federal programs. The food pyramid, called MyPyramid in recent years, is expected to receive a face lift as well. The precise timing of the release of each is not known, according to John Webster, a spokesman for the USDA.

But whether a new blueprint on healthy eating will change habits that have given us one of the highest obesity rates in the world is an urgent question. Decisions about what to eat are generally made at the supermarket, not while reading federal guidelines. “What we need to do is put more effort into figuring out how to engage people who don’t use nutrition as a major deciding point’’ when buying food, says Alice H. Lichtenstein, a professor at the Friedman School of Nutrition Science and Policy at Tufts University. “We really need to learn more about consumer behavior.’’ Experts like Lichtenstein wonder if more nutrition information helps or confuses shoppers.

Some in the field argue that the guidance needs to be much clearer, more like the wildly popular “Eat This, Not That!,’’ a magazine column, reworked into a book and an iPhone app, that made its mark telling readers which fast food was nutritionally better than others.

Dr. David L. Katz, director of Yale University’s Prevention Research Center and an associate professor at the university’s School of Medicine, is an advocate for more specific guidance. For example, 45 to 65 percent of daily calories should come from foods that contain carbohydrates. But “lollipops and lentils are both carbs,’’ Katz says. And while the current federal recommendations do stress eating carbohydrates from whole grains, fruits, and vegetables, he adds, “We need to do a better job of specifically defining highly recommended foods.’’

Dr. Walter Willett thinks it will not happen in the upcoming guidelines. The chair of the Department of Nutrition at Harvard School of Public Health believes the new guidelines will be “consistent with [USDA’s] mantra that there is no such thing as a good food or a bad food. I think that ignores a huge mound of evidence that it does matter what you eat.’’

The final guidelines, he says, are influenced by more than just science. “I’m not sure the USDA can ever really do that: Tell people to cut back on red meat, rice, pasta, and potatoes,’’ says Willett. “They’re going to have huge elements of the agricultural industry on their doorsteps.’’

Some educators think MyPyramid is a useful tool. Leigh Ann Edwards, national program operations director for Cooking Matters, an organization that offers classes to low-income families, says the pyramid helps categorize foods and shows how they fit in a daily diet. “It gives us a way to talk about food,’’ she says. A discussion of vitamins and nutrients gets complex and confusing, she notes.

While no one is talking about the final 2010 recommendations before their release, a June advisory report, open for public comment, gives some clues. Cohen of UMass Amherst expects the final guidelines to place even greater emphasis on physical activity and continue to recommend that people include more fruits, vegetables, nuts, seeds, foods with Omega-3 fatty acids, and a suggestion to eat three servings of low-calorie dairy products a day (some argue that calcium supplements should be used in place of the third serving).

Diligent shoppers aren’t likely to gain much new perspective from a revamped pyramid, Willett says. “It is helpful in offering a general gestalt about healthy eating,’’ he says. “But we need something more detailed that tells us how healthy this particular food is.’’

To get something endorsed by all might take as long as it did to build the great pyramids of Egypt.

M.E. Malone can be reached at m.e.malone@comcast.net.