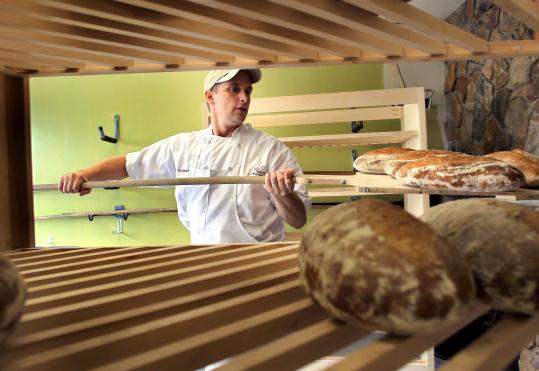 PLYMOUTH — A round of tawny dough lands with a soft thud on a wooden bench. Flour shimmers in the air. Fingers flying, Peter Nyberg folds, turns, presses, pats, then tosses a perfectly shaped loaf into a cloth-lined basket. It’s just after midnight, and Nyberg — who’s been a chef, baker, consultant, manager, and culinary arts instructor — is back doing what he loves best: making bread.

What the world needs, Nyberg says, is one good loaf, crafted in the 18th-century tradition. That means using organic grains and natural starter, shaping by hand, and baking with fire. “I’ve done everything under the sun with bread and bakery,’’ he says. “I want to focus on really great grains and a really nice loaf. How original and down to the bare basics can I get?’’ Today, about six months after he launched Hearth Wood Fired Bread in an industrial park here, three bakers turn out more than 2,000 loaves weekly. Trucks head out before dawn, so the time from oven to delivery is never more than six or seven hours.

The especially moist crumb of a Hearth bread reveals large holes in the slices, which is the way Nyberg intends it to be. “An open, irregular cell structure is a sign of a natural starter and proper fermentation,’’ he says. “The slow fermentation yields a natural sour that you taste as a subtle bloom in the back of the throat, not as a sour taste on the tongue.’’ The crust is chewy and tastes faintly earthy.

Nyberg, 41, had been working at when his position as senior director of bakery was eliminated in 2009. He saw it as an opportunity. “I had gravitated toward operations and production,’’ he said. “I really missed making bread.’’ While he and his wife, Nicole, were brainstorming their next step, Nyberg had lunch with a friend who asked, “Peter, how many loaves of bread can you make by yourself in a day?’’

The baker’s answer: “A lot.’’ The two decided that Nyberg could make a living doing what he loved. “It was that simple. Flat out that simple,’’ he says.

Nicole left a career in pharmaceutical sales to handle the company’s business and marketing. With their own savings, a bank loan, and a $35,000 micro-enterprise loan from the Town of Plymouth, they set about building a bakery reminiscent of the 18th century. He bought a 60-ton gueulard masonry oven from France. He found pictures of old wooden troughs and benches and hired a local carpenter to build them; the three-foot-long troughs have dovetailed joints and rotate on wooden dowels to turn out the dough. Then he proceeded to perfect a dense, chewy, multigrain loaf. Except for the stone grinder he uses for five heritage grains, and an electric mixer to form the dough initially, nothing in the process is mechanized. “We don’t even have a refrigerator on site,’’ he says.

Nyberg builds the fire around 2 p.m. He fills the firebox below the oven with wood, then places the cast-iron gueulard or “big mouth’’ into the cavity. The heat and flame generated in the furnace enter the oven’s baking chamber through this gueulard, which Nyberg manipulates to direct heat to different sections of the oven. It takes a minimum of four hours to bring the oven to 460 to 480 degrees. Regulating the temperature is tricky. Too little heat in the firebox, and the oven will cool; too much, and the bread will scorch.

Bakers begin the loaves with a sourdough starter that Nyberg has been nurturing for more than 20 years. To unbleached King Arthur Sir Galahad flour he adds organic emmer, kamut, spelt, rye, and hard red winter wheat. He buys organic emmer from Oechsner Farms in Newfield, N.Y., and the other grains from Champlain Valley Milling in Westport, N.Y. Filtered tap water and sea salt are the only other ingredients.

With its curved paddles, the mixer works like hands. “Most mixers over-aerate the dough,’’ Nyberg says. “This is slow folding, so when you cut into the bread, it’s yellow, showing the natural tones of the grains, and the flavor is preserved.’’

The dough rises in the troughs for 3 1/2 to 4 hours, and is turned out onto the wood bench to rest for an hour. Then it’s cut and shaped into ovals, and placed in individual cloth-lined baskets to rise for another 1 1/2 to 2 hours. Bakers turn the loaves out of the baskets onto a large baker’s peel, make a deep slash down the center of each with a razor, and slip them into the massive oven. Some 20 to 40 minutes later, depending on the temperature of the oven, 72 amber-colored ovals, their tops stretched open to create a distinctive fin or “ear,’’ emerge. No one sets a timer. Doneness is judged by eye. The 1 1/2-pound loaves stay fresh for three or four days.

Loaves are delivered in craft paper sleeves to smaller markets and restaurants from Hyannis to Boston (Grill 23, Ruth’s Chris, the Four Seasons Hotel, the Langham Hotel), and as far south as New Bedford. People who stop by the bakery can purchase a loaf on the spot for $4.25.

After working at the corporate level of the baking industry, Nyberg relishes this uncomplicated one-loaf business model. “I’ve been through start-ups to huge multimillion dollar projects,’’ he says. “The simplicity of this is so appealing.’’

Making an ancient replica of our daily bread may be simple, but it’s not easy, says Nyberg. “To really focus on one thing and make it the best it can be every single day is a lot to do.’’