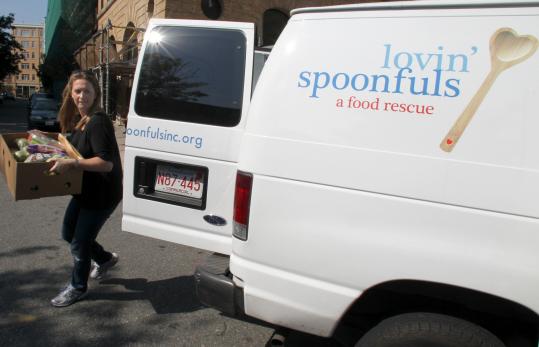 First stop is Trader Joe’s, which donates six boxes of fruits and vegetables. Next, Eastern Standard Kitchen & Drinks, where chef Jeremy Sewall provides three pans of prepared food: beef and rice, risotto, and fruit salad, all untouched from a restaurant event. From there, the van heads to the Boston Rescue Mission on Kingston Street near Downtown Crossing.

Until recently, the Rescue Mission and other hunger organizations rarely received fresh produce. Now it does, thanks to Ashley Stanley and Benjamin Delfiner of Lovin’ Spoonfuls, which Stanley launched in January. Charles Sommers, the food service director there who feeds about 200 people a day, hugs Stanley when she arrives.

This is one of many stops that Stanley, 31, makes at shelters, soup kitchens, and other social assistance programs. While many organizations collect shelf-stable items, Lovin’ Spoonfuls gathers fresh goods from supermarkets, produce wholesalers, bakeries, restaurants, and other sources and delivers directly to agencies that feed the hungry. Pantries mostly deal with cans and boxes because they don’t have refrigeration. Stanley’s motto is: “There is enough food out there; let’s go get it.’’

Lovin’ Spoonfuls is funded by grants and private contributions. Last month, Myers + Chang hosted a fund-raiser for the organization. On Sunday, Stanley handed out turkeys at the mission with Governor Deval Patrick.

After the Downtown Crossing delivery, Stanley and Delfiner, 28 (a cousin), drive to a Stop & Shop in Dedham. This is the pilot store for the chain’s recently launched recovery program with Lovin’ Spoonfuls. Steering a rolling rack through the store’s cavernous back rooms, Stanley picks up boxes at designated areas. She and Delfiner greet the store employees they pass, then load their van with a dozen boxes of bread, day-old deli sandwiches, meats, and an abundance of vegetables and fruits. The produce may be slightly bruised or at its “sell by’’ date, or just removed from shelves to make room for new shipments.

Admiring the bounty, Stanley blurts out, “Stuff like that just gets me amped. It’s such a team effort.’’ She says the retailer has committed to an estimated 500,000 pounds of food per year.

One last stop — for day-old breads and two quiches at Flour Bakery + Cafe in the South End, then the van heads for Pine Street Inn. Jack Nolan, acquisition and distribution manager, lights up when he sees all the fresh food. “We’re so excited about the Stop & Shop program,’’ says Nolan. Pine Street serves about 2,500 meals a day. The shelter receives food donations from food drives, producers such as Wonder Bread, and the Greater Boston Food Bank, but until now, fresh produce was a luxury they could hardly afford.

The Lovin’ Spoonfuls duo also makes regular pickups at and .

A soccer player in high school and college until an injury sidelined her, Stanley comes to the food recovery business from high-end fashion retail. She credits her parents with emphasizing the importance of community service when she and her brother, Adam, were young. Stanley, a Wellesley native, lives in Brookline now; her brother teaches English in Thailand.

One day, after considering the fate of the leftover food on her restaurant table, Stanley started researching the subject of food waste.

She learned about City Harvest in New York, San Francisco’s Food Runners, and Philabundance in Philadelphia. She also came across the blog “Wasted Food’’ (www.wastedfood.com), which is written by another Wellesley native, Jonathan Bloom. According to Bloom’s research, which is highlighted in his new book, “American Wasteland,’’ Americans waste 40 percent of the food produced in this country.

On Thursday nights, at a drop-off in Newton, they retrieve leftover CSA produce shares from Red Fire Farm of Granby, including carrots, potatoes, onions, cabbage, and squashes. Sarah Voiland, one of the farm’s owners, says, “We don’t want to see our fresh organic vegetables thrown away; we want them to be used.’’

Stanley acknowledges her role is “a small contribution to a really large effort’’ by others, such as the Greater Boston Food Bank. “We’re small so we have the ability to handle last-minute pickups when a store or restaurant calls with available food.’’

She hopes to hire more staff and put another truck on the road. “The more resources we have, the more impact we can have,’’ she says. “It’s the same conversation over and over,’’ says Stanley. “It’s about how much food is wasted and how many people are hungry.’’

For more information on Lovin’ Spoonfuls, go to www.lovinspoonfulsinc.org.