Giving thanks with fine craft ale

Do it right and pair beers with the dinner’s courses, starting with something light 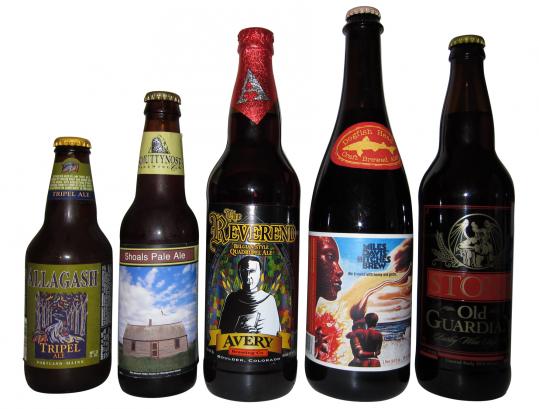 It’s long been a tradition to bring a bottle of wine or two to dinner. Now that Americans are beginning to treat craft ale as seriously as fine wine, next Thursday is the perfect time to introduce your friends and relatives to some outstanding brews, while at the same time helping them realize that “beer’’ does not have to equal “Coors Lite.’’

But it’s not as easy as picking up a six-pack of Oktoberfests or India Pale Ales. To do it right, you need to know how to pair beers with courses. IPAs, for instance, are a no-no. You don’t want an overly hoppy beer before or during dinner; it will destroy your palate.

“IPAs and double IPAs just aren’t going to work, because the Thanksgiving meal is made up of sweet and earthy dishes,’’ says Noah Feldman, the beer manager at the Urban Grape, a wine and craft beer store in Chestnut Hill. “It’s the same way you do dinner with wine: If you’re having a steak, you’re not going to have a pinot grigio; if you’re drinking a stout, you’re not going to eat a white fish.’’

So what should you serve? It depends on when you serve it.

When your guests walk in the door, hand them something light. “You want something to stir up your senses and prepare you for the food,’’ Feldman says. Lagers and pilsners are safe choices, but you could be adventurous and offer a light Belgian-style beer. Allagash Tripel Ale, made in Maine, is a good aperitif. Straw yellow with a small head, it has a bold herbal nose that hints of clove and banana. Smooth and slightly tropical without being bitter, it tickles the tongue as it goes down. Nine percent alcohol by volume. About $9.99 for a four-pack.

Keep the beer tame as you bring out the hors d’oeuvres, cheese, or salads. You’re still trying to entice your taste buds. Pale ales are perfect for this course, but stay away from the hoppier ones. Smuttynose Shoals Pale Ale, out of New Hampshire, is a nicely balanced, amber brew with a mild citrus aroma. There’s a slight bitterness toward the end, but it goes down smooth. Five percent ABV; $9.99 for a six-pack.

When you put the big spread on the table, you can move toward a stronger beer. “Turkey, stuffing, gravy — for food like that, you want to go with something with higher alcohol,’’ Feldman says. Strong Belgian ales accentuate the sweet flavors of Thanksgiving dinner, he says. With many craft brewers now focusing on Belgians, there is a vast array of choices, from strong golden ales to dubbels and quads. Consider Avery Brewing’s The Reverend, which is labeled as a quadrupel but would be better described as an Americanized Belgian strong ale. Whereas quads are usually dark brown, this one’s a rusty amber. The flavor is complex — its backbone is heavy alcohol and Belgian yeast, and cherry and licorice are suggested in the taste. 10 percent ABV; $8.99 for a 22-ounce bottle.

If you want to serve beer with dessert (and indeed you can), pour something deeper and sweeter — “something that’s able to stand up to the dessert,’’ as Feldman puts it. Imperial stouts are ideal choices, and there’s an outstanding new one on the block: Dogfish Head Miles Davis’ Bitches Brew. Made with honey, the nose manages to bring up both chocolate and vanilla, and then coffee and hazelnut come through in the slightly bittersweet taste. It pours motor oil black with a quickly dissipating cafe latte head. Nine percent ABV; $13.99 for a 22-ounce bottle. (As an alternative, pumpkin beers can work well with Thanksgiving dessert, too.)

Once you’re done eating, you may want something to help you digest your gigantic meal — perhaps a slow-sipping barleywine. English-style barleywines tend to be less carbonated and less hoppy, but it’s also OK to have something with more hops after the meal is over. Stone Old Guardian (which is released every February and ages well) pours a cloudy amber and is at once woody, sweet, and citrusy, with more carbonation and more hops than in a traditional barleywine. 11 percent ABV; $6.99 for a 22-ounce bottle.

One word of note: No one is suggesting you spend your holiday sucking down high-alcohol beers. These are merely suggestions to help guide your way. Bigger bottles should of course be shared three or four ways. It is Thanksgiving, after all.

99 Bottles is a monthly column about good beer. Steve Greenlee can be reached at greenlee@globe.com.