THIS STORY HAS BEEN FORMATTED FOR EASY PRINTING
The Food Issue 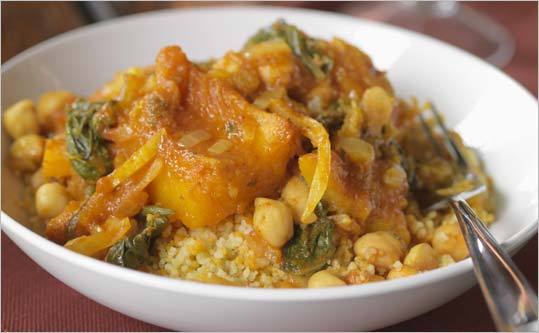 Chef Alia Radjeb Meddeb, owner of the Baraka Cafe in Cambridge’s Central Square, recommends braising this stew in a clay pot or a tagine, and serving it over rice or couscous.

Peel of 1/2 lemon, cut into strips

Set the oven at 350 degrees. Halve the pumpkin and scoop out the seeds and fibers. Place the pumpkin, cut sides down, on a baking sheet. Bake until the pumpkin is just tender when pricked with a fork, 30 to 40 minutes. When cool enough to handle, skin the pumpkin and cut into 2-inch chunks.

In a pot of boiling water, cook the chard for 1 minute. Drain in a colander and set aside.

In a small saucepan, bring 1 inch of water to a boil. Add the lemon peel and simmer 1 minute. Drain and repeat. (Blanching removes the bitterness.) Drain and set aside.

Increase the oven temperature to 400 degrees. In a large Dutch oven or flameproof casserole, heat the oil over medium heat. Add the onion and cook until it starts to turn golden, 10 to 12 minutes. Stir in the turmeric and ½ cup of the cilantro. Add the tomatoes, cinnamon, cayenne, 2 teaspoons salt, and ½ teaspoon black pepper and simmer gently for 10 minutes. Stir in the pumpkin, chard, lemon peel, chickpeas, and 2½1/2 cups of water. Transfer the stew to a tagine or a clay pot, if using; otherwise cover the cooking pot and place it in the oven. Bake until bubbling hot, about 45 minutes, stirring halfway through cooking time.

Stir in the remaining 1/2½ cup of cilantro and the parsley. The stew shouldn’t be soupy, but if it needs more liquid, add a little water. Taste for seasoning and adjust as needed. Serve hot.

Lisa Zwirn is a regular contributor to the Globe Magazine’s food issues. Send comments to magazine@globe.com.