Mushroomer unearths a delicacy in the forest 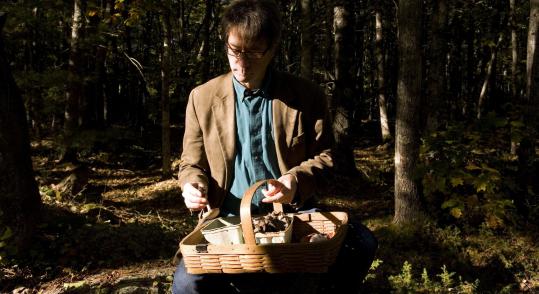 LINCOLNVILLE, Maine — Greg Marley is in a damp grove of hemlock, toting a woven basket, followed closely by Rosie, his big black Newfoundland. He’s looking for black trumpet mushrooms and finds the sinister-looking, funnel-shaped fungi on a patch of moss. “The French call them trumpets of death,’’ he says. “It’s probably because they want them all to themselves. They’re my wife’s favorite. So good on pizza.’’

Marley, 55, says that anyone with an interest in foraging will find at least six edible varieties of mushroom growing in New England fields and forests. In his new book, “Chanterelle Dreams, Amanita Nightmares: The Love, Lore, and Mystique of Mushrooms,’’ he elaborates on chanterelles, porcini, puffballs, morels, shaggy manes, and chicken mushrooms. “Americans are a mycophobic bunch’’ — afraid of mushrooms, says Marley. “Walking through the woods, the assumption is that most wild mushrooms are poisonous, and that they have the potential to sicken or kill anyone foolish enough to pick and eat one. But once you know a mushroom, it is hard to mistake it for anything else, and actually, around here, there are many more edible mushrooms than there are poisonous ones.’’ Because of mycophobia, Marley has some wooded areas all to himself. In the fall, that means a bonanza.

A clinical social worker by day, Marley is also the author of “Mushrooms for Health: Medicinal Secrets of Northeastern Fungi’’ about varieties that possess health benefits. “Chanterelle Dreams’’ is written more with the kitchen in mind. With his basket full of black trumpets, the forager heads to his car. He has a hunch that a few miles down, along the shores of Megunticook Lake, he may find the last matsutake, a mushroom so flavorful it is esteemed in Korea and Japan.

The trail down to the lake is soft and sandy, covered in pine needles. Old stone walls wind through the woods. “Matsutake grow on steep slopes around pine and hemlock,’’ says Marley. He walks quickly, scanning the trail ahead of him and the slopes on either side, then stops. There seems to be nothing, but he crouches down, brushes away pine needles, and digs into the dirt. There, its white cap barely visible, is a perfect matsutake. Marley digs for the rest of it. The thick stalk is separated from a bulbous head by a smooth, web-like veil. The mushroom smells like cinnamon and damp wool. “In Japan these can sell for big money,’’ says Marley. “Here, they are just beginning to catch on.’’

Marley finds a few dozen matsutakes, and then, on the way out of the woods, he spots and picks just about every other species of late fall: puffball (edible when firm and pure white), russula (hot and spicy, somewhat popular in Eastern Europe), half-blood-red cortinarius (used for dye), and honey mushroom (common, flavorful, safe to eat when properly cooked).

The forager loads the basket, then the giant dog, into the car. He looks back into the woods. The leaves are turning, the soil is getting colder. “It’s the end of the season,’’ says Marley. “Too bad. I’m still waiting for fall oysters, and maybe blewits, and if we’re lucky some winter chanterelles, and then that’s probably it until spring.’’

Jonathan Levitt can be reached at jon.levitt@gmail.com.