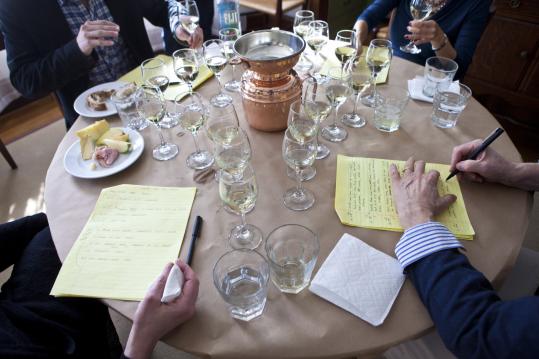 In the blowout blind tasting of 50 $12-and-under wines we stage each October, we put both the bottles and the skills of the tasters to the test. The idea is to identify a select handful of versatile, appetizing, readily available wines, the kind we would be willing to buy a few cases of and see on our table from night to night, no matter what comes out of the kitchen. This year’s Plonkapalooza is our sixth annual tasting. Joining me were Ellen Bhang, a wine intern at Legal Sea Foods and a graduate student in the gastronomy program at Boston University; Joan Johnson, co-owner with Charles Draghi of the Bay Village restaurant Erbaluce; and Kai Gagnon, sommelier at Bergamot restaurant in Cambridge.

The format is straightforward: We ask five retailers to name six to eight whites and reds that, in their opinion, offer outstanding value. After eliminating the few inevitable duplicates, we settle on a final group, purchasing 10 wines from each retailer. We slip bottles into numbered paper bags beforehand to mask identities, then challenge panelists to choose their five favorites in each category. With four tasters, the highest score a wine can receive is four.

For any wine to emerge as a unanimous choice is unusual and marks it as something special. This year a single wine achieved this distinction: the 2009 Saint-Peyre Coteaux du Languedoc Picpoul de Pinet, a French white. Tasters were beguiled by its apple-pear fruit profile and zesty lime-tinged finish. Four wines captured the hearts of three tasters: the 2009 Case Ibidini IGT Sicilia Insolia, a mineral-edged Italian white; the 2008 Domaine Brunet Vin de Pays de la Mediterranee Pinot Noir, an easy-drinking, cherry-lipped French red; the 2008 Schlossmuhlenhof Dornfelder Rheinhessen Trocken, a sprightly German red in a one-liter bottle; and the 2006 El Coto Rioja Crianza, an even-tempered Spanish red with solid strawberry-ish fruit. Seven wines got thumbs up from two tasters. (See Page 21 for a list of all wines that received at least one vote, along with some tasting notes and the name of the retailer who suggested it.)

At the end of about four hours of tasting, the bags come off the bottles. It’s the moment when panelists get to see if they guessed country of origin or varietal correctly: the riesling one mistook for gruner veltliner, the red another tagged as grenache that turned out to be — whaddaya know? — grenache.

Tasters can step back and share their overall impressions. In general, this panel was more enthusiastic about the whites on offer, finding an appealing spectrum of flavor and aroma profiles. Several showed interesting floral and mineral elements that extended the feature set beyond primary fruit.

Since flights are organized to move from lighter to heavier wines — we taste them in groups of fives, first whites, then reds — it’s easy to see where votes cluster along the axis. Among whites, a preference for those tasted early on (the lighter ones) was plainly evident. Of the 20 votes cast in the white category, 16 were given to wines appearing in the first three flights; 13 of these in the first two flights.

One plausible explanation for this is that inexpensive whites we find pleasing are those that are naturally light and crisp, moderately dry, with bright acidity and no oak treatment, wines that will naturally find their way into the first few flights. These features also tend to be more common in Old World wines. Indeed, six New World bottles were all relegated to the final two (heavier) flights. These received a mere four votes. No doubt the taster’s individual stylistic preferences play a role.

A bias toward lighter, drier wines persisted among reds. Of the 20 votes cast, 15 were for bottles in the first three flights; 12 of these in the first two flights. The panel was less inclined to view the category favorably, however. Repeatedly, especially in later flights where wines from the New World (Chile, California, Australia) were clustered, tasters complained of a discouragingly pervasive sweet, grapey-pruney profile. Gagnon’s notes describe one wine as “like grape juice with vodka added.’’ Johnson complained of a cough-syrup-like sweetness.

It’s tempting to conclude that a disturbing trend away from classically dry reds has taken hold in our market, particularly among New World wines at these price points. Tasting even 25 wines doesn’t provide certainty of this, in part because we don’t really know why retailers nominate the wines they do. Is it because they fly out the door? Have they been favorably reviewed elsewhere? Are they personal favorites? Another set of 25 may have left a different impression.

But Plonkapalooza panelists have complained about this in the past, so it seems fair to conclude that at least for the year ahead, you may find more table-friendly reds among European wines from cooler growing regions. 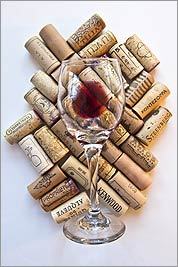 Plonk of the month

Bottles worthy of going the distance

Spring and fall we’re on the prowl for wines with an aptitude for extended tours of duty.
Your comment is subject to the rules of our Posting Policy
This comment may appear on your public profile. Public Profile FAQ