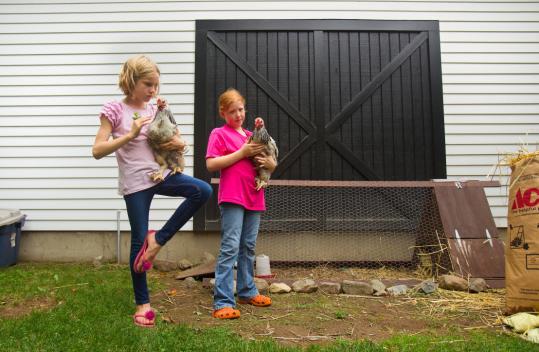 Gabriella Jackson (left) and Katie Culman, both 9, play with rented chickens in Jackson’s yard in Lexington. Gabriella was primary caretaker of the chickens, which laid about an egg a day. (Dina Rudick/Globe Staff)
By Andrea Pyenson Globe Correspondent / October 13, 2010

WESTON — Raising chickens is not just for poultry farmers anymore. As suburban consumers strive to learn where the food they eat comes from, some of them are also keeping birds in backyard coops.

In addition to getting flavorful eggs with vivid yellow yolks, owning chickens has its advantages. The chicks produce great lawn fertilizer and can be fun. But becoming a suburban chicken farmer takes a pretty serious commitment. Enter Land’s Sake Farm, which offers a chicken rental program — sort of a “risk-free trial,’’ says education director Douglas Cook. Now in its second year, the program runs from spring through mid-November (depending on the weather). Rentals come with two chickens, a portable coop, and organic feed. For $100 you can be a farmer for two weeks and call for help when you need it.

On a recent Friday afternoon at the farm here, Cook is trying to get chickens out of their open pen and into the mobile coop for deliveries to several renters. Holding a small amount of cracked corn, the chickens’ favorite treat, in his palm, he coaxes first one, then another bird close enough so he can scoop them up. Then he and a helper lift the coop into his truck. They also load a large plastic crate containing food and bedding, toss in a bag with extra bedding, some cracked corn, and set off for Lexington, the first delivery.

Andrea Jackson is home to receive her backyard guests. Her sister, who lives in Shrewsbury, owns chickens, as do her neighbors. “We were thinking of getting [chickens] permanently,’’ she says. Her husband was set to build a coop, when their 9-year-old daughter, Gabriella, heard about the rental program. “It’s such a smart idea,’’ says Jackson.

Land’s Sake sends out 10 Light Brahma chickens, which take turns on rental rotation. This hearty breed, perfect for New England’s climate, was selected by the farm because the gentle birds are easy to manage. The small flock is friendly and well trained.

After setting up the coop, delivering basic instructions and a printed sheet of information, and answering Jackson’s questions, Cook drives to the next stop, a pickup. It looks like no one is home, so he and his assistant go to the backyard, pick up the coop, and carry it to the truck. They spot an egg lying in the grass. When they bring it to the back door, five squealing children under 5, with one young mother, spill out.

Sarah Caputo is the mother of two of the children, 4 1/2-year-old twins Allison and Jane. She says, “I’m considering keeping chickens and wanted to see how much work it was. With the kids, it’s fun to have an interesting educational experience.’’ After two weeks, Caputo says she is “still considering.’’ The rental comes with chores. “I learned you have to change their water, even if it’s pouring out. I learned some chickens eat their own eggs. But it was a huge thrill every time we got an egg.’’ Those were “far superior to anything you get in the supermarket,’’ she adds.

In Wayland, Edie Hotchkiss, her 7-year-old daughter Jenny, cousin Emily Leventhal, and Jenny’s friend Sophia Blair-Goldin form an excited welcoming committee for two birds, whom they name Ginger and Maryanne. The Hotchkisses are Land’s Sake CSA members. While settling the chickens in their coop, Cook answers questions: Fresh eggs can remain at room temperature for up to one month; eggs have a bloom, a protein-like mucus coating that keeps bacteria from penetrating the shell. Don’t wash eggs until just before cooking to keep the bloom on.

A little over a week into her rental, Hotchkiss says that the eggs are delicious, but the yield is low. “I wouldn’t do it solely for the eggs,’’ she says. Ginger and Maryanne lay about an egg a day between them. But, says Hotchkiss, “The kids are having a ball.’’ And the birds are “doing a good job on our lawn.’’

The Jacksons in Lexington had an overwhelmingly positive experience. Gabriella has been their primary caretaker, while 8-year-old Julian “is along for the ride and the enjoyment,’’ says mom. The chickens laid about an egg a day, which the family enjoyed with their neighbors.

She’s not running out to buy a flock just yet. “All pets turn into mother’s pets,’’ she says.