The first sip is like a revelation. It looks like iced coffee, smells like iced coffee, but doesn’t quite taste like iced coffee. That’s because it’s cold-brewed, and it fills your mouth with intense flavor. But there’s no bitterness. Instead, it’s almost sweet, accentuating the finest elements of coffee taste. In weather like we’ve been having most of the summer, it would be easy to sip on this all day long.

Cold-brewed iced coffee isn’t new in the industry, but relatively new to the Boston area — at least at the scale it’s being offered now. According to coffee experts, taking the heat out of the brewing process also removes much of the coffee’s acidity. The result is a drink that is richer and smoother than the hot-brewed alternatives. Jaime van Schyndel, co-owner of Barismo in Arlington, compares it to “having a nice bourbon over ice. You get a lot of essence out of the coffee, a lot of texturing and depth. It’s just a better experience.’’

Judson MacRae, who runs the coffee bar at Hi-Rise Bread Co. in Harvard Square, says cold-brewed iced coffee “has a lot of body, tends toward chocolate-y flavors, finishes sweet.’’ This is the third summer the Brattle Street cafe has been serving the beverage. “It’s been gaining a lot of popularity,’’ he says. “People know what it is now — to a degree.’’ Hi-Rise cold-brews “as year-round as possible,’’ says MacRae, though the demand is smaller in colder weather.

“It’s a whole new brew method for us,’’ says Jake Robinson, coffee program director at Pavement Coffeehouse in Boston, a relative newcomer to the local scene. “You get a lot of sweetness, not bitter or sour notes.’’ Because cold brewing is a slow process, and Pavement is introducing its customers to the drink slowly, the shop makes relatively small amounts and sells out quickly.

The primary brewing techniques used in local shops are total immersion and the Toddy method. For total immersion — used at Barismo, Hi-Rise, Pavement, and Cafe Fixe in Brookline — baristas steep coffee grounds in filtered water for 12 to 24 hours, at room temperature or in the refrigerator (steep time is longer if it’s chilled), then the grounds are removed through a cloth filter, fine-mesh strainer, cheesecloth, paper filter — or some combination.

At 1369 Coffee House in Cambridge, Toscanini’s in Cambridge, and one of the two Jaho Coffee and Tea shops in Salem, coffee makers use the Toddy method, in which ground coffee is placed in what is essentially a very large teabag, put in an even larger container of water to steep at room temperature for up to 24 hours. That creates a coffee concentrate that is diluted with water. Josh Gerber, owner of 1369, says, “It’s a lot of work to cold-brew iced coffee, but we think it pays off.’’ It has been the method of choice at his shops since 1996. “We think it makes a superior product.’’

At one of the Jaho shops, owner Anil Mezini uses a Kyoto-style drip system imported from Japan, which looks like something out of a science lab. This method takes about eight hours to brew. Mezini, who spent a year in college studying in Japan, believes the system is “very visually pleasing for the customer.’’ And he thinks it brews iced coffee with “bolder, richer flavor.’’ It takes a finer grind than other cold-brew methods, he says. “You get more extraction from the coffee.’’

If you don’t feel like going out for your chilled caffeine, it’s amazingly easy to cold-brew iced coffee at home. There are several cold-brew coffee pots on the market, but you really don’t need any special equipment. Invent your own system with a couple of Mason jars, a fine-mesh strainer, coffee filter or cheesecloth.

Once brewed, the coffee will keep in the refrigerator for four to five days. Just add ice. 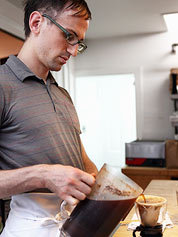