In Rockport, Maine, a pub with old-time feel 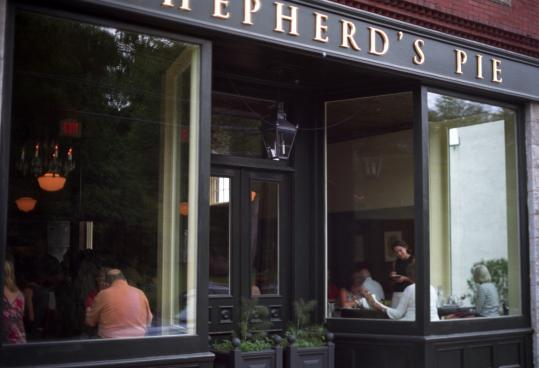 ROCKPORT, Maine — Down the hill from the Center for Maine Contemporary Art, in the town’s historic Shepherd Block, sits a pub with a rustic tin ceiling. Its wooden walls evoke a ship’s galley and its dark dining room glows with candlelight. The building, an artfully renovated former grocery store once owned by Rockport industrialist Herbert L. Shepherd, dates to 1892. Shepherd’s Pie gives the impression that it’s been moored on Central Street forever. In fact, it’s been open about two months.

It’s so close to the harbor, you almost expect the place to rock slightly in the steady swells. Its front windows face the main drag, a street that, until very recently, had no dining options and rolled up its sidewalks at nightfall.

Inside, the bright, open kitchen of Shepherd’s Pie clangs with pots as cooks plate fried clam tacos, pork belly sandwiches, duck hot dogs, and even in a heat wave, the namesake shepherd’s pie with ground Maine lamb. At the head of the line, chef Brian Hill quietly checks plates of halibut and skirt steak. He says the restaurant’s best water views are from the bathroom and the dishwasher’s station. “That’s on purpose,’’ he says. “I was really concerned about becoming a tourist restaurant.’’

When the restaurant opened in late May, it had no sign, no phone, and accepted no reservations. Still, many locals, eagerly anticipating a restaurant, swarmed the 54-seat pub. “It’s amazing how word of mouth works in a small town,’’ says Hill. After the busy Memorial Day weekend, the water line broke, so the staff took a much-needed night off and headed over to the bar at Francine Bistro, Hill’s other, highly acclaimed spot, in Camden.

“Shepherd’s Pie sort of happened by accident. I had been talking about a pizza place in Rockport for years,’’ says Hill. “I’d always had this idea to put in a neighborhood bar, but push the food a little further.’’

On the menu, that philosophy shows up in an appetizer with fresh peas from Beth’s Farm Stand in Warren. And on a plate of pickled watermelon, fiddleheads, and squash. And a fava bean puree with pecorino. Hill serves mackerel stuffed with lemon and bay leaf. Caesar salad comes with smoked alewives. The burger has just the right ratio of meat to fat. Barbecued chicken is cooked like Hill remembers the volunteer fire department doing, sprayed down with vinegar and salt and with a smoky aroma from the kitchen’s wood-fired grill. The simplicity works — and not just for the food. The only draft beer here is a microbrew from Oak Pond Brewery in Skowhegan.

One hour into service, nearly all the seats are taken and the place is thunderously noisy. (“Because we don’t take reservations, we’re probably the only place where people want to eat out at five o’clock,’’ Hill says.) Up the street, Pascal Hall hosts an art show, and at the nearby Rockport Opera, the chamber orchestra plays Bach and Beethoven. A few photography teachers from the Maine Media Workshops, whose summer programs attract photo greats Eugene Richards and Bruce Davidson, mingle on the sidewalk in front of the Corner Store, a breakfast and lunch place that recently reopened.

Hill grew up on a goat farm in nearby Warren and remembers the Rockport of his youth as a place where he and a group of “terrorist punk rock kids’’ would hang out at Guido’s pizza and watch artists from around the world who had come for the summer. After high school, he toured the country with his band, the Heretix. “Eventually, I got tired of sleeping in a van, so I started working for Todd English,’’ he says. English was cooking in Boston at the time and put Hill to work, first on breads, then pasta. He cooked his way around New Orleans, California, and New York.

In 2001, he returned to Camden and took over Francine, a hip coffee shop. He transformed the place into a destination bistro. But Hill isn’t avant-garde. At Shepherd’s Pie, he garnishes a plate of Maine rock crab ceviche with crusty saltine crackers.

The crowd gravitates to the pub until last call. The bell buoys ring in the foggy harbor and in spite of the beers and the late hour, Rockport’s sidewalks are firmly in place.

Peter A. Smith can be reached at peterandrysmith@gmail.com