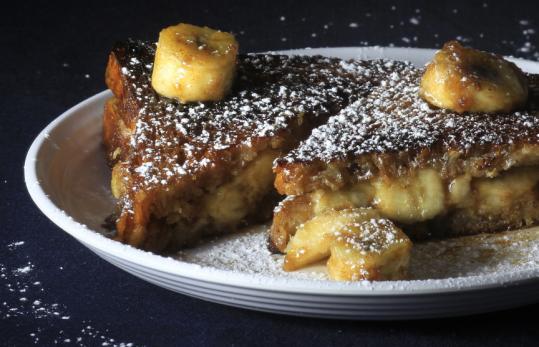 To avoid juggling 4 skillets on the stovetop, make 2 sandwiches at a time. The cinnamon-honey butter has a tendency to ooze out from the seams during the last stage of cooking — the more, the better.

1. In a medium bowl, combine honey, cinnamon, salt, and butter.

1. In a large skillet over medium heat, melt 1 tablespoon of the butter. Arrange 4 slices of bread in a single layer, pouring a heaping tablespoon of cinnamon-honey butter into the center of each slice. Cook gently for 4 minutes or until the bottoms start to crisp. If necessary, lower the heat to medium-low.

2. Meanwhile, in another large skillet over medium heat, melt 1 tablespoon of butter. Saute the bananas for 3 minutes, turning once, or until just starting to brown.

3. Reserving 4 banana rounds, distribute half the remaining banana onto 2 slices of bread in the skillet. Using a spatula, carefully invert the remaining slices to form two sandwiches. Cook the sandwiches for 3 minutes more or until crisp and golden.

4. Cut sandwiches on the diagonal and garnish with reserved banana rounds. Sprinkle generously with confectioners’ sugar. Use the remaining butter, bread, and bananas to make 2 more sandwiches. Adapted from Mike & Patty’s