Nothing fishy about our seafood 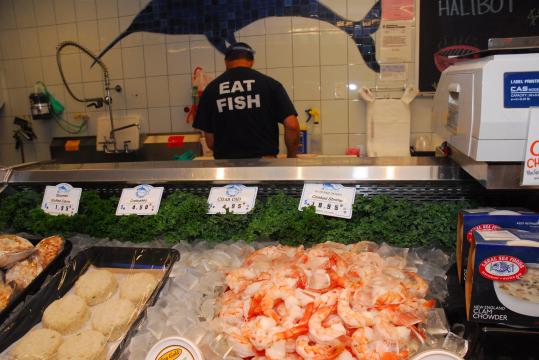 Before the Gulf oil spill, only an occasional customer at Woods Seafood in Plymouth would ask about where the fish came from.

After the spill, said owner Jay Kimball, “the questions have increased tenfold. People are asking every single day they see this on the news, and they don’t know how it affects us. Will it come up the coast, they ask, will it affect prices?”

A survey of seafood markets on the South Shore, as well as information from the government agencies that inspect fish supplies, indicate that seafood bought in stores here is as safe as it has ever been, and will continue to be. It also reveals that most of the seafood eaten in this area comes from this area.

And for the moment, market owners said, prices have not spiked, though the longer-term outlook for certain products is unclear.

Still, the questions arise, and for market owners, that’s not necessarily a bad thing.

“The questions we get are good questions. People are concerned where their product is coming from,” Kimball said. “All our seafood is from the North Atlantic — the cod, haddock, sole, and the scallops, flounder, all pretty much New England. There’s no problem so far, but the questions are increasing.”

“Absolutely, more people are asking where it’s coming from,” said Mike Pugliesi, owner of Rocky Neck Fish Co. in Hingham. “But we don’t carry any fish from the Gulf.”

Richard Pease, general manager of Turk’s Seafood in Mattapoisett, said sometimes people see things on the news or the Internet that simply aren’t accurate. For example, he said, some have heard that haddock spawns in the Gulf then comes up the coast and is caught here.

“That’s just not true, so we have to tell them what is,” Pease said. “A lot more people are asking questions, and they trust what we say. Things like haddock and cod are always landed by local boats. We get it off the boats in New Bedford and Boston.”

“We always stick with what we can control,’’ said Pease, whose company includes Turk’s Restaurant and Turk’s Sushi Bar. “Some people will ask if I have certain type of Florida fish and I just say no. We do 3,000 pounds of local fish a week here.”

A good rule of thumb, according to Paul Diodati, director of the Massachusetts Division of Marine Fisheries, is “if it’s fresh, it’s coming from local ports.” If it’s sold as frozen or previously frozen, it’s probably imported, but still safe, he stressed.

Eventually, the Gulf spill’s biggest impact locally may be on shrimp. More than 70 percent of the shrimp landed in the United States comes from the Gulf, according to the National Oceanic and Atmospheric Administration. NOAA is keeping a keen eye on Gulf fisheries, along with the Food and Drug Administration, the Environmental Protection Agency, and the National Marine Fisheries Service.

Close behind are oysters; the Gulf lands 67 percent of the nation’s supply, according to NOAA.

So that shrimp you’re buying today could very well be Gulf shrimp — but it was caught months ago, long before the spill.

“The only thing we get from the Gulf is shrimp,” said Matt Burke, owner of Burke’s Seafood in Quincy. “And shrimp in that area is flash-frozen, so there’s a big supply built up, and we’re still working through that.

Once that supply is exhausted, however, things could change. Customers “ask what the impact is on us,’’ Burke said. “We tell them there may be changes in the availability of shrimp, but we’re not sure how it will unfold.”

Seafood market owners were unanimous in saying the fish most people favor around here — such as cod, haddock, flounder, and lobster — are harvested in northeast waters. And there are other options for shrimp.

“We use black tiger shrimp from Vietnam now, which is giving the Asian market the impetus to bump up prices,” said Charlie Murray, manager of Jack’s Seafood Restaurant and Market in Hull. “The same thing happened a few months ago when the Iceland volcano blew. It was difficult to fly out Norwegian salmon, so the Canadian market went crazy and started raising their prices.”

Any effect here from the spill on fish quality may be longer-term, said Skip DeBrusk, president of the Friends of South Shore Fisheries in Scituate.

“The bluefin tuna we catch here is from the Stellwagen Bank and Cape Cod,” he said. “They breed in the Gulf and just finished before the spill, so those eggs are floating in oil or dispersant, and that will presumably have an impact on future generations of bluefin we’d normally catch here in Massachusetts.”

While the economic impact has been tremendous in the Gulf, this area could eventually suffer as well, he said.

“For all types of fishing here, every dollar’s worth of product landed on the dock generates three to five dollars in onshore trade, retail, transportation, cooking, etc.,” he said. “If we lose any aspect of that, it has a large impact on the shore industries as well as what’s happening out on the ocean.”

And though more customers are asking about the origin of the fish they’re buying, Murray said: “In a way, it’s almost helped us rather than hurt us. The other day I got a call from a woman who asked where I get my tilapia. I said Ecuador and Costa Rica.

“She said, ‘I’m at a supermarket, and they only carry Chinese tilapia,’ ” Murray said. “An hour later, she came in and bought here.”