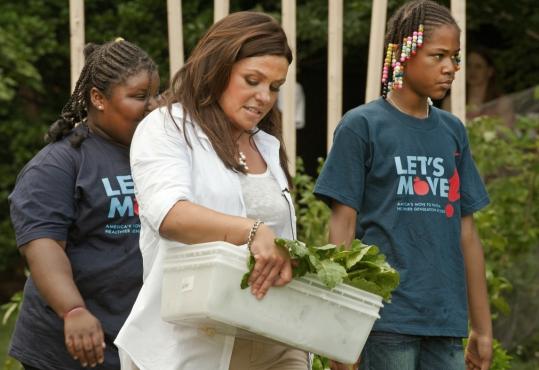 WASHINGTON — Rachael Ray steps into the tidy rows of vegetables in the White House kitchen garden, rolls up her sleeves, and addresses an elementary school girl near her.

The girl shakes her head so her braids, tied with red, white, blue, and pink beads, fly around.

“We’ve got to get you to like tomatoes,’’ says the perky celebrity chef. Along with other chefs including Cat Cora, Marcus Samuelsson, Tom Colicchio, Ellie Krieger, and Jose Andres, Ray is chatting with children from Hollin Meadows Elementary School in Alexandria, Va.

In this unscripted moment, Ray reiterates a message Michelle Obama has been delivering since she picked up a shovel last year to break ground for the garden: Children should eat more fresh fruits and vegetables. Earlier in the day, Obama kicked off her Chefs Move to Schools program with 500 chefs who gathered on the White House Lawn. The program is part of her Let’s Move campaign to combat childhood obesity and encourage chefs to go into schools to deliver hands-on lessons about cooking, gardening, and healthy eating.

Obama tells the white-toqued crowd, “You can make the salad bar fun — now, that’s something — and delicious. You can teach kids to cook something that tastes good and is good for them and share your passion for food in a way that’s truly contagious.’’

Two Boston-area chefs, Guida Ponte of Verrill Farm and her husband, Ed Micu, a chef-instructor at Greater Lowell Technical High School, are in the garden on this sunny, 90-degree day. Ponte, who says she’s used to “picking and cooking’’ at her Concord farm job, will soon be working with a school (not yet designated). “I want to be their teacher and mentor,’’ she says. Earlier that morning, she spotted artichokes and chamomile growing.

“The garden’s success is a good indication that the public is ready to hear more about food and health,’’ says Eddie Gehman Kohan, editor of Obama Foodorama (obamafoodorama.blogspot.com), the blog of record about Michelle Obama’s food initiatives (it’s being archived at the Library of Congress). “To have children in there is so genius, and so critical.’’ Gehman Kohan started the blog as a fun sideline to her Los Angeles-based food blog during the campaign, when candidate Barack Obama inspired everything from cookies to cocktails. After the election, she moved to Washington.

Before Michelle Obama, the most recent White House gardener was Eleanor Roosevelt, who established a Victory Garden during World War II. Last year, the 1,100-square-foot garden yielded 55 varieties of fruits, vegetables, and herbs on a lawn once used as a demonstration area for a Wright Brothers airplane. One plot is devoted to the heirloom lettuce, beans, and cabbages cultivated by Thomas Jefferson. To sweeten things up, there’s also a beehive.

This season, Jim Adams, White House chief horticulturalist, and his staff expanded the L-shaped garden by 400 square feet, making room for new crops such as bok choy and sorrel. In early June, chard, mustard greens, and broccoli stand about knee-high, ready for harvest. Green beans need another two weeks. Some produce goes to the first family’s table and to official functions. More is donated to Miriam’s Kitchen, which serves meals to the Washington-area homeless population.

“I hope you’re hungry and open-minded to try new things,’’ Kass tells the children near a raised bed of rhubarb.

When Michelle Obama walks down to help, the chefs clang spoons against metal bowls and cheer her. After greeting the children and reaching out for hugs, Obama says, “Some of the most outstanding chefs in the whole world are helping you.’’ Then she sets to work harvesting broccoli and fennel, while Samuelsson helps cut rhubarb stalks and Ray picks salad greens.

Yosses and a group wash vegetables with a hose in a corner of the garden, a welcome activity on this sweltering day. The pastry chef says he heads here nearly every day to pick. He recently braised plums with lemon verbena and used chamomile in a sauce. Honey from the hives sweetened chocolate-cajeta tarts with goat cheese ice cream served at the state dinner for President Felipe Calderón of Mexico last month.

“It’s really amazing when children come to tour,’’ Yosses says. “If they have grown, picked, or cooked the food, all of a sudden their resistance to eating it goes away.’’

These guests stay for lunch in the garden. The menu is grilled chicken salad with herb-sherry vinaigrette, a yogurt-based vegetable dip, and rhubarb-strawberry crisp.

No pressure to clean your plate.

Clara Silverstein is the author of “A White House Garden Cookbook: Healthy Ideas from the First Family for Your Family.’’ She can be reached at clrsilver @gmail.com.