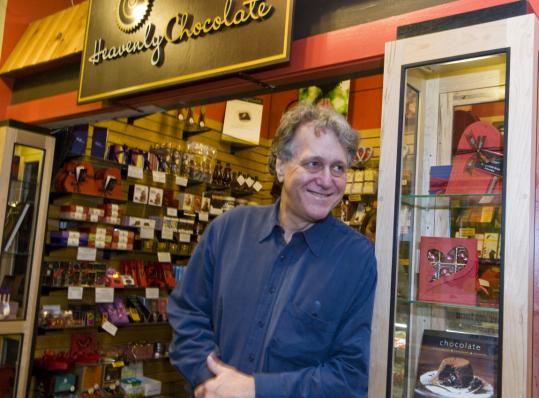 Bud Stockwell is owner of Cornucopia’s Heavenly Chocolate in Northampton, where Honey Vanilla With Sea Salt chocolates are a local favorite. (Nancy Palmieri for The Boston Globe)
By Aubin Tyler Globe Correspondent / May 12, 2010

NORTHAMPTON — When Jenny Katz visits family here, she makes a point of stopping by Cornucopia’s Heavenly Chocolate to pick up treats for her two sons back in New Haven.

“I get four chocolates — two each. They see the brown box and get all excited,’’ she says.

Ike, 12, and Emerson, 9, favor Peanut Butter Sizzle, a molded chocolate in the form of a miniature playing card with a peanut-buttery filling and a cayenne pepper bite as well as Le Razzmatazz, chocolate ganache infused with raspberry and a hint of lemon encased in dark chocolate.

Heavenly Chocolate is owned by Bud Stockwell, a native of Ludlow, who arrived in town in 1975 from Springfield, where he’d had a grant to start food co-ops in low-income neighborhoods. In Northampton, which was just beginning its renaissance, he managed the Yellow Sun food co-op, where he met his wife. In 1980, the couple started Cornucopia, a natural foods store; they married in front of the produce cooler.

“I said, ‘You’re crazy.’ Four days later I had every piece of equipment that woman owned. She was a French woman, very sweet. She would come to the house for several months and we’d spend the morning poring over her recipes and techniques.’’

That was three years ago. Today the chocolatier looks for organic ingredients when he can get them — almonds, butter, mango, and whole vanilla beans. He’s partial to using ingredients grown within a 100-mile radius.

Most Heavenly confections are made of dark chocolate with a high cocoa content, in the 65 to 70 percent range. “The beauty of dark chocolate is that it doesn’t have to be overly sweet,’’ says Stockwell. He and an assistant make the artisan chocolates by hand in small batches to ensure freshness. “We put a lot of time and effort into what we do.’’

A local favorite is Honey Vanilla With Sea Salt: cream and chocolate ganache with honey and vanilla beans enrobed in glossy chocolate dusted with a few grains of fleur de sel. Another is the house truffle: rich and intensely chocolatey, almost bittersweet, with a hand-dipped chocolate shell and swirl on top.

“Every chocolate has a signature so we know what it is that we’ve made,’’ says Stockwell. That can consist of a bit of lavender, a tiny coffee bean, a sprinkle of chopped pistachio or crystallized ginger, even a pinch of Earl Grey from the Tea Guys, local tea blenders. Sometimes there are old-fashioned pecan pralines, made with toasted pecans.

For vegans, there are dark-chocolate dipped rosettes of marzipan (crushed almonds and sugar) made without butter or cream. Or rocher, slivered almonds soaked in Grand Marnier and sugar and then roasted and dipped as a cluster in chocolate.

Chocolates can be chosen by the piece or by the pound. A 1-pound box costs $35, but four pieces are less than $5, which makes them recession proof, says the chocolatier.

Even before he started making his own chocolates, Stockwell carried the best handmade confections he could find. His other lines include Montana-based Béquet caramels, black currant chocolate hearts from Knipschildt in Connecticut, raspberry truffles from Lillie Belle Farms in Oregon, and tiny chocolate-dipped caramels topped with a few grains of sea salt — a favorite of the Obamas — from Fran’s Chocolates of Seattle.

Tom Druschel is a regular at the kiosk. He and his wife, Bonnie, once sent a box of chocolates to a local bank manager to thank her for resolving a problem.

“She’s still talking about it,’’ he says.