Chef aims to give marathoners a leg up 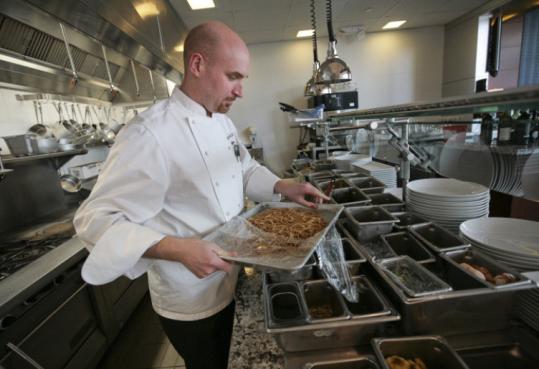 This weekend Gregory Griffie will cook for hundreds of marathoners and their families. Though he’s a runner himself, he won’t be in the Boston Marathon (it’s his goal to qualify someday). Instead, Griffie is preparing healthy carb-packed menus for guests of 606 Congress at the Renaissance Boston Waterfront Hotel.

The executive chef wants other runners to feel at home. “I know it’s hard to eat healthfully when traveling,’’ he says. The night before the race, they can feast on vegetables, legumes, whole-wheat pasta, and lean meats. On Marathon morning, runners can get sustenance from the restaurant’s oatmeal buffet.

Griffie has completed nine marathons and 12 half marathons. Chefs aren’t the most likely long-distance runners; the job means being on your feet all day and cooking until late at night. But several chefs in this region are serious runners, including Joanne Chang of Flour Bakery and Myers + Chang (16 marathons), Richard Vellante of Legal Sea Foods (12), and Peter McCarthy of Evoo and Za (five).

Griffie, who is 6 feet tall, began running in 2001 after he passed the 200-pound mark, due in part, he says, to “late nights and a lot of partying.’’ He was working in Baltimore and began running with another chef. Today, he runs five to six times a week. “It’s easy to get caught up in the whole excitement of races,’’ says Griffie, 35.

On April 17 and 18, 606 Congress will offer a Carbo-Load Pasta Dinner for $32, which features hummus; Caesar salad; lentil soup with fennel and chard; whole-wheat spaghetti with broccoli rabe and turkey sausage; pasta with grilled chicken; pasta with shrimp; a runner’s shake with yogurt, banana, cocoa, and peanut butter; and oatmeal raisin cookies.

Griffie’s passion for running is inspiring others in his kitchen. Last month, chef de cuisine Mike Rosa, 29, ran his first marathon in Virginia Beach, Va., qualifying for Boston in 2011.

Griffie is up at 5 a.m. five days a week to log miles before his daughters, Emma, 5, and Claire, 3, wake up. Once a week he jogs around South Boston’s Seaport area in the afternoon. Running, he says, is “peaceful and a great stress release.’’ The chef has lost weight, has more energy, and sleeps better.

He also eats better. “Whether I’m in training or not, I keep butter and cream to a minimum and focus on having more vegetables than meats,’’ he says. At home, the family eats meatless meals at least once a week. They have switched to whole-wheat pasta and added more legumes.

In training now for a marathon in Frederick, Md., in May, Griffie knows exactly what he’ll eat that day. Two hours before start time he’ll have a bowl of oatmeal with brown sugar, raisins, and a splash of milk. One hour before, he’ll take in 150 calories from either a sports bar or half a bagel with peanut butter.

After the race, he’ll have earned one of his favorite indulgences: a medium-rare burger topped with blue cheese, and a beer.