She takes the cupcake 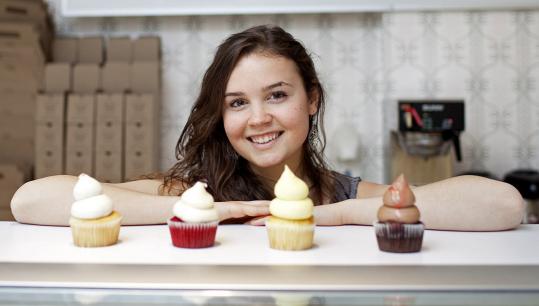 Elizabeth Ginsburg is the organizer of Boston CupcakeCamp, which will feature 70 amateur bakers and at least 10 to 15 professional bakers, bakeries, and caterers. (Yoon S. Byun/Globe Staff)
By Courtney Hollands Globe Staff / April 14, 2010

What’s small, crowd-pleasing, and frosted all over? A cupcake, of course. Get your fill of these sugary confections at CupcakeCamp tomorrow night at P.A.’s Lounge in Somerville. The informal gathering started in San Francisco in 2008, and has since spread to Montreal, Philadelphia, and even Adelaide, Australia. The CupcakeCamp concept is simple: Amateur and professional bakers make cupcakes to share, and attendees eat them. Elizabeth Ginsburg, 23, knew she had to organize one in Boston after nibbling her way through New York’s inaugural camp last spring. We chatted with the Porter Square resident and self-described foodie (she tweets @FreeFoodBoston) about the event and cream cheese frosting.

Q. What happens at CupcakeCamp?

A. It works differently in every city — I’ve been modeling ours after the New York one. . . . It’s a free and open atmosphere for people to try cupcakes. There’s not a lot to it. The success of CupcakeCamp depends on the enthusiasm and generosity of the people who donate and bake cupcakes. It’s collective cupcake eating.

A. Absolutely. A line will form outside. P.A.’s isn’t huge and I’m not quite sure what to expect. . . . We’ve got over 70 amateur bakers bringing a dozen to four dozen or more cupcakes each and at least 10 to 15 professional bakers, bakeries, and caterers coming.

Q. What kind of cupcakes are people baking?

A. Someone is making a Farmers’ Market Fudge Cake, which is a chocolate cupcake made with beets and bacon on top. Someone is doing an all-organic carrot cake cupcake — and another person is bringing green tea cupcakes with brown sugar frosting. I’m seeing a lot of red velvet and coconut cupcakes and black bottom cupcakes with brownie on the bottom and cheesecake on top.

Q. Intentional or a coincidence that CupcakeCamp falls on tax day?

A. Complete coincidence. . . . I’m enjoying it though. People should celebrate finishing their taxes by eating some cupcakes.

Q. Do you think the cupcake craze is here to stay?

A. Recently, I’ve been hearing that French macaroons are the new cupcakes. I guess the cupcake trend will die down, but I think there is still room for it to grow, at least in Boston. Gluten-free is one niche. There are at least two gluten-free bakeries in New York. (Ginsburg later e-mailed: Based on the fact that at least half of our registered professional bakers are either up-and-coming custom order businesses or new bakeries opening soon, there is definitely evidence that the trend is not slowing down any time soon.)

Q. Finish this sentence: If cupcakes aren’t on the dessert menu, I’ll have . . .

A. Here’s a question for you: Is plain cake on the menu? I’m a big fan of any warm chocolate cake with ice cream. I like the temperature contrast. I would have a different answer every day of the week, though.

Q. What kind of cupcake are you craving now?

A. Carrot cake. I love cream cheese frosting. That’s why I like Petsi Pies — they put a big dollop of frosting on their cupcakes.

Q. So, the more frosting the better?

A. Oh, yes. With cream cheese frosting, you can never have too much.

This interview was condensed and edited.