From snout to tail 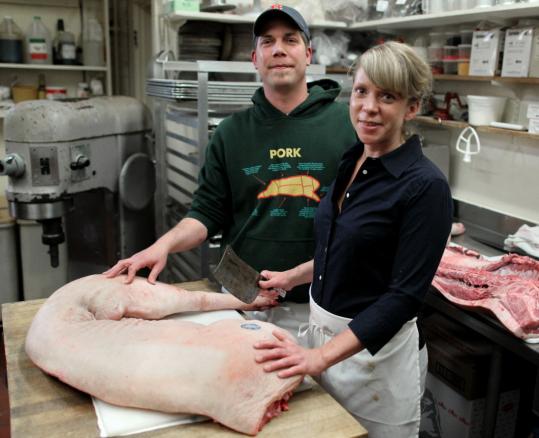 Last week, gourmet food shop Formaggio Kitchen hosted a pig butchering demonstration. It was led by charcuterie Julie Biggs and executive chef Jason Lord. Tonight the two do it again. Both events sold out quickly. We spoke with Biggs and Lord about nose-to-tail eating, what goes into breaking down a pig, and why a bunch of city dwellers would be interested in the first place.

Q. Tell me a bit about the demonstration.

Biggs: It was a great turnout. It sold out in less than 24 hours. We started out with half a pig and demonstrated how to break it down into primal cuts. Jason did the butchering. We talked about each individual part and their specific uses. What can you do with the head, the belly? You can make bacon and pancetta, but it’s also great roasted or braised.

Q. Was anyone squeamish?

Lord: We tried to shock them. We put the pig’s head right out there to see what the reaction would be, but more than being scared or being freaked out, people seemed psyched.

Q. Interest in butchering seems to be on the rise. Why do you think that is?

Biggs: People are taking a lot of interest in where meat is coming from. I think it’s part of the eat-local movement. The head-to-tail thing is really big now in Boston. People are becoming more used to it. It’s not freaky or daunting anymore to eat a pig’s tail.

Lord: People are taking an honest interest in the things they’re consuming, knowing where they’re coming from and what they’re putting into their bodies. I think the culinary world has a lot to do with it, as well as the television world: the Food Network, the farmers’ markets. It’s helped everybody realize these things do grow in our backyards rather than just getting shipped on trucks.

Q. People used to use the tails and ears and all these parts because they had to; they were poor. But now chefs have reclaimed it, given it a kind of glamour.

Lord: Before it was a necessity, curing and storing and using every bit. Now it’s more for fun and to eat something daring.

Q. What do you think people will do with the skills they take away from these workshops? Will they order pigs and butcher them?

Lord: It helps people when they’re going shopping. At the butcher or supermarket, they have more knowledge of the pieces they’re looking at. It will make people a little less afraid to buy, say, a giant ham.

Biggs: I think we’re really moving away from disassociating ourselves from meat, the kind that comes in a Styrofoam package already trimmed.

Q. I wonder if the interest goes a little deeper, too — if knowing about our food in this way gives us some kind of connection we’re otherwise lacking. People have posited that food is the new religion. . . .