The art of espresso gets pretty heated 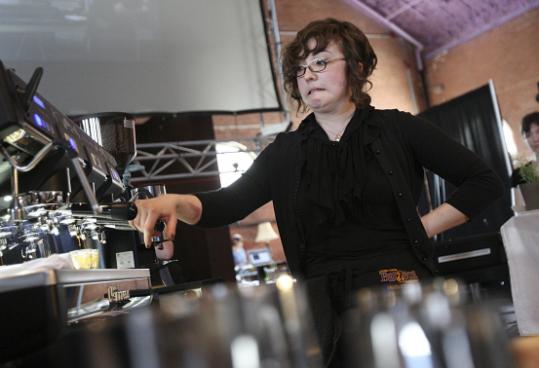 SOMERVILLE — As they pull shots, pour steamed milk, and assemble signature drinks, simultaneously describing the features of the coffee they have chosen, little in the competitors’ demeanor suggests the intense pressure they’re under. A slight hand tremor, visible only to those in the first or second row, give some away.

Thirty-six baristas are doing what they do every day, except that an audience and seven judges are watching them. And they have a time limit. “It’s like ‘Iron Chef’ on caffeine,’’ says Matthew Hodges of Peace River Coffee.

At the 2010 Northeast Regional Barista Competition, held this month at the Somerville Center for the Arts at the Armory, baristas have 15 minutes to make and serve four espressos, four cappuccinos, and four espresso-based signature drinks. The latter range from the culinary-inspired (hollowed out pears lined with dark chocolate and filled with pureed cooked pear, hazelnut whipped cream, and espresso) to the shockingly simple (a shot of espresso that its creator promises will taste totally different from her previous one in the “espresso’’ round).

The event, held in New England for the first time, drew competitors from the Bay State, Rhode Island, Maine, New Hampshire, and New York. Any lingering doubts about Boston’s legitimate coffee culture can be tossed out like the grounds from yesterday’s moka pot. This is the largest of the Specialty Coffee Association of America’s 10 regional competitions of 2009-10. Of the six finalists, three are locals and three are from New York. Nikolas Krankl, owner of Taste Coffee House in Newtonville, placed second, behind Danielle Glasky, from Stumptown Coffee Roasters in New York’s Chelsea neighborhood. Both will go on to the national competition in Anaheim, Calif., next month, Glasky with her expenses paid.

Finalist Claire Cheney, a barista at Boston’s Flat Black Coffee Co., says she loves the intensity of the competition. “These are all awesome baristas.’’ Todd Mackey of New Harvest Coffee Roasters in Pawtucket, R.I., was the other local finalist.

A steady crowd of coffee aficionados, competitors’ friends and relatives, and industry insiders kept the Armory buzzing for the three days of the event. “The New England region is turning a corner in a big way,’’ declares George Howell, president of George Howell Coffee Co., who brought specialty coffee to the Boston area in the mid-1970s through his former business, Coffee Connection. “We’re seeing a renaissance. Cafes are declaring independence from roasters. They’re all doing rotating espressos. It will lead to increased education.’’

That the competition took place locally was due in large part to Jaime van Schyndel, co-owner of Barismo in Arlington, which hosted the event and cosponsored it with New Harvest and Howell Coffee. Van Schyndel says his goal “was to get the community together. We invited people to cosponsor with us and invited roasters to serve their coffee.’’ A coffee bar was unique to the Boston competition.

Being on stage, which is set up to imitate a coffee bar, is “beyond words nerve-racking,’’ says Nathaniel Hoyt, a barista at Simon’s Coffee Shop in Cambridge. He competes, he says, because “it’s the best way to become a better barista. It’s also the most painful way. It pushes you to be perfect.’’

“I’m going to let my coffee speak for itself,’’ says Jordan Barber of Cafe Grumpy in New York, as he prepares his signature drink during the finals round. Taking his lead from what he describes as his coffee’s hazelnut and blood orange features, Barber, who placed third, mixes espresso with a blood orange reduction, almond- and hazelnut-infused water, cream, and a pinch of fleur de sel.

Krankl mixes panna cotta and a reduction of dried cherries and blueberries — both of which he had made — and sets them over a low flame while he prepares his cappuccinos and espressos. For his signature, he adds 70 percent Valrhona chocolate and espresso to the panna cotta, then whisks everything together. Glasky’s signature drink begins with a base of coffee infused with rosemary, and steamed milk with honey. She adds espresso shots, and tells judges to stir with rosemary stems that she had dipped in honey.

The competition may be over, but Beantown’s coffee community is fired up.