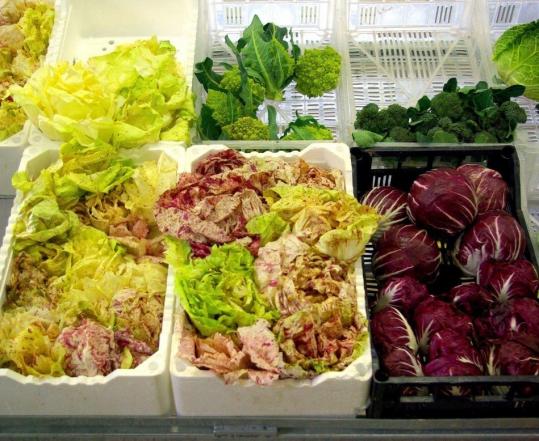 Radicchio plants can hold in cold storage before being replanted for forcing. (David Lyon for The Boston Globe)
By David Lyon Globe Correspondent / March 24, 2010

TREVISO, Italy — Lucio Torresan holds an armload of what appear to be green and red weeds with knotted roots. “We just pulled these from the field,’’ he says. “You would never know that it is radicchio. It is so bitter that even the goats won’t eat it.’’

Torresan’s Azienda Agricola Tenuta al Parco (or “Park Farm’’) is one of the largest growers of Treviso radicchio, which enjoys IGP (indicazione geografica protetta) status — a European Union regulation limiting its legal growing area to 55 towns north and west of Venice. Just as wines have their “denomination of origin,’’ a few select vegetables win IGP status, which guarantees both the varietal and place where it is grown.

Technically a chicory, most of the radicchio in the United States is the Chioggia variety, named for the town on the Venetian lagoon where it originated. It resembles a grapefruit-size red cabbage. Treviso radicchio resembles a big red Belgian endive or a romaine lettuce. It is the sweetest and most delicate of the family, and northern Italians adore it.

“The secret,’’ Torresan explains, “is that you must force it in cold water in the dark. It becomes a completely different vegetable.’’ It turns tender and sweet, but retains a residual, pleasant bitterness.

Torresan likes to show curious farm store visitors around his Treviso radicchio operation. He starts with a room-size refrigerator stacked high with field-harvested radicchio from which the top half of the leaves have been whacked off with machetes. With part of the root still attached, the plants can hold in cold storage for up to a month before they are re-planted for forcing.

In the barn, the field-harvested plants are set into shallow 30-by-30-foot tanks fed with a constant flow of spring water. In 10 days, Torresan says, the deep red, tender inner leaves begin to grow at the heart of the plant. In another 15-18 days, they are ready for harvest. A crew of workers strip away the outer leaves, leaving the tender hearts, and Torresan starts over with more field-harvested plants from his refrigeration locker.

The system permits him to produce the delicate Treviso radicchio from late October to early May. Both the labor and the waste in this growing system are tremendous, although the discarded leaves are composted and plowed back into the soil.

Restaurants in the Venice region embrace radicchio season just as Boston restaurants celebrate tomatoes. Because it thrives in the cold, radicchio has been popular winter fare in northern Italy since the days of Pliny the Elder (23-79 AD), but it didn’t take off as a staple until hydroponic forcing began around 1950.

During the week I spent around Venice in December, Treviso radicchio seemed to be on every menu. I ate it in salads, chopped into a raw salsa for steak tartare, mixed into risotto, and roasted and drizzled with vinegar. In every case, the intensity of the flavor argues for small portions. The vegetable’s sharpness definitely wakes up the taste buds.

The best treatment of all was a seasonal house specialty at Graspo de Ua (Venetian dialect for “bunch of grapes’’), a small hotel restaurant on narrow Bombaseri street near the Rialto bridge in Venice. The restaurant has been around since 1860, and its menu is a model of traditional Venetian cooking. Over the winter, when Treviso radicchio is plentiful, one of the most popular pasta courses is a small plate of duck ravioli tossed with a buttery radicchio and chestnut sauce. The slight sharpness of the radicchio plays perfectly against the sweet chestnuts and the savory duck.

Even a goat would approve.