Men leave their own mark on veganism 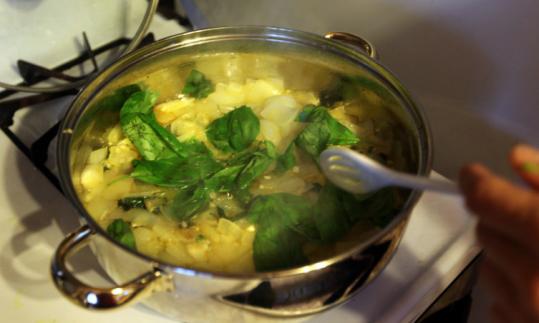 A pasta dish with chickpeas, onion, garlic, olive oil, and basil is a vegan dish a hegan could sink his teeth into. (Pat Greenhouse/Globe Staff)
By Kathleen Pierce Globe Correspondent / March 24, 2010

SOMERVILLE — For most of his life Joe McCain subsisted on pepperoni and sausage pizza, steak bomb subs, and anything “fried, fried, or fried.’’ In other words, says the Somerville police detective with a shaved head, snowy beard, and tattoos cascading up his arms, chest, and neck, “I ate like an American.’’

When McCain reached his mid-40s the party ended. Topping the scales at 257 pounds and bulging out of his clothes, the stout father of three was fat, unhappy, and “terribly uncomfortable.’’ On the advice of his childhood friend Brian Rothwell, a yoga instructor and lifelong vegan, McCain cut meat, dairy, eggs, chicken, and fish from his diet and added power vinyasa yoga, which helped him shed 60 pounds in eight months. “I feel like a million bucks. And if anything, I don’t look like a slob anymore,’’ says McCain.

Three years later, sipping a yerba mate latte at the Sherman Cafe in Union Square, the buff and bright-eyed McCain is the new face of veganism: men in their 40s and 50s embracing a restrictive lifestyle to look better, rectify a gluttonous past, or cheat death. They are hegans. They are healthy. And they are here to stay. While no one was looking, guys were stepping up to the wheatgrass bar. Famous hegans include “Spider-Man’’ Tobey Maguire and singer Thom Yorke of Radiohead. tight end Tony Gonzalez was vegan for a few years but now eats seafood and chicken on occasion.

Perhaps the ultimate hegan is Rip Esselstyn, a veteran firefighter and triathlete in Austin, Texas. He helped the men in his department lower their cholesterol in 28 days by shunning animal protein and then turned his efforts into the best-selling “The Engine 2 Diet’’ (Wellness Central). Though not billed as a vegan diet per se, Esselstyn’s “plant-strong’’ lifestyle helps lower cholesterol by going meat-, egg-, and dairy-free, he says. “Sure there is a stigma attached to it, that it’s for yuppie, tree-hugging, emaciated weaklings,’’ he says. “That is far from the truth. I like to say that real men eat plants.’’

Eric Faulkner, a professional in high tech, is baking a batch of vegan cookies in his Lowell loft. He minces few words to explain why he became a vegan. “I’m scared to death of cancer,’’ says the lanky 42-year-old. After reading “The China Study’’ (Benbella Books), which purports that animal protein can accelerate the growth of cancer, diabetes, and heart disease, Faulkner ate his last cheeseburger.

For the past eight months meals in his household have been healthy remakes of meaty standbys. “I make a great avocado Reuben sandwich, a faux meat loaf, roasted butternut squash soup, and lots of pasta,’’ says Faulkner, whose wife and 8-year-old daughter have also converted.

To stay competitive during rugby games, athlete and writer Jay Atkinson of Methuen substituted soy cheese for the real deal last summer and cut out turkey sandwiches. “I needed to extend my career by staying lean,’’ says Atkinson, 52. He was already eating well before he turned to veganism. Commuting to Boston to teach magazine writing at Boston University or slapping on skates to whiz across a frozen pond, he needs as much fuel as he can get. The vegan diet delivers.

“During the week I’m hustling. This is the perfect diet. I couldn’t bring a ham with me,’’ says Atkinson, who tosses protein bars, fruit, and water into a pack before heading out for the day. Like most hegans, Atkinson, a single father, taught himself to cook. Spicy black bean chipotle stew and potato and asparagus soup with fresh dill are two of his specialties. He feels nutritionally satisfied as a vegan, but admits there are some drawbacks. “The big thing is learning to cook for variety. I’d like to be able to make 30 to 40 meals instead of 10,’’ he said.

There are no hard numbers on how many hegans exists. By nature most men don’t make their eating habits public. “I’ve never been called one,’’ said Bob Bouley, owner of the new vegan restaurant, The Pulse Cafe, in Davis Square (see Cheap Eats review, Page 3). “Being a vegan is not something I flaunt, it’s just something I believe in.’’

Of the diners who flock to his warm, Caribbean-toned cafe for smoked tofu and portobello maki, a majority are women, Bouley says. “Judging from our Facebook page, 65 to 70 percent of our fans are women between the ages of 18 and 35.’’

In Newton, the raw vegan restaurant Prana Cafe is poised to become hegan headquarters. On a rainy evening last month, Fred Bisci, 80, the well-known lifestyle nutritionist from Staten Island, N.Y., dined on bountiful greens in the candy-colored cafe that serves smoothies, salads, and vegan wine next to a yoga studio. In town for a speaking engagement, the limber and chiseled hegan of 40 years, is a walking tribute to eating lean. “A lot of people think it’s radical. It definitely prolongs your life. No question about it,’’ says Bisci.

Taylor Wells, who owns the cafe and yoga enterprise with her hegan husband, Philippe, estimates that 10 to 15 percent of their customers are hegans. “We get men who come in who want to cleanse and feel good. We like to ease them into it. I think the word vegan gets a bad rap, it sounds very militant and angry,’’ says Wells.

But hegan could catch on. “It makes sense that it would become a new fad. We are seeing more men in our yoga classes and they come directly into the cafe,’’ she says.

Despite the proliferation of vegan products on the market and restaurants that cater to this growing vegetarian subset, hegan living is not always harmonious. There are times, especially in the summer, when McCain will catch a whiff of a neighbor’s barbecue and his inner carnivore will start to roar. But the temptation doesn’t take over. “When you start to feel the way I do and see the results from eating right and working out, it’s hard to think about changing,’’ he says.

One thing he would like to change is the misconception that being a vegan means being on a diet. “The thing I hear all the time is: ‘Are you still on that diet?’ It’s the farthest thing from a diet. I don’t feel limited at all. If anything, what I eat has expanded not contracted,’’ he says. “I will never diet ever again.’’