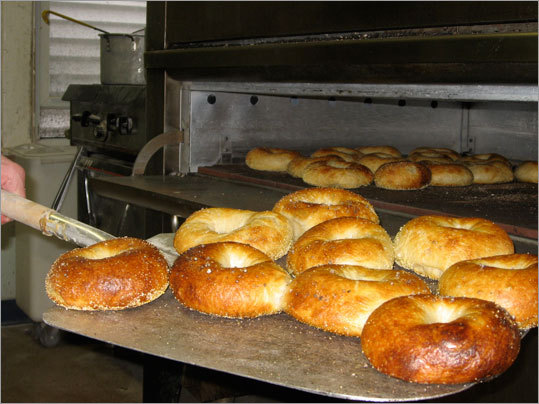 SOUTH PORTLAND, Maine - “You’ve gotta meet Lulu,’’ says Allison Reid, setting down a 5-gallon bucket of sourdough starter on the workbench. She pries off the lid and plunges an arm into the elastic sponge, which jiggles and quickly resets into a uniform, bubbly mass. The shaggy piece of Lulu we taste is ripe, tangy, and sweeter than Hans. Hans is the pungent, streaky chestnut-colored rye starter she keeps in another container. “I started Lulu in my kitchen and followed her along,’’ Reid explains. “She’s probably eight years old now.’’

Reid relays this introduction to Scratch Baking Co.’s most essential ingredient as she weaves between racks, deck ovens, and several employees on a busy Saturday morning. Reid is entirely self-taught; she and her first business partner, Josh Potocki, “Mickey-Moused it together,’’ as she explains it, to open 158 Pickett St. Cafe in South Portland. When their relationship fizzled, she teamed up with friends Bob Johnson and Sonja Swanberg five years ago to jump-start Scratch a few blocks away in Willard Square.

When Johnson joined Reid, he became the barista and business manager.

“We came to visit Allison and saw a ‘for sale’ sign,’’ says Johnson, whose resume includes cofounding Magic Hat Brewing Co. in Vermont and making wheels of cheddar at Shelburne Farms, also in Vermont. “I knew I wanted a smaller, community-based business, so we bought the building that weekend. Now my job description is to get up every day and make sure we throw a party.’’

So they turned Scratch into a village bakery with Cheers-like camaraderie. Johnson’s got everyone’s name and morning brews down pat. Baskets of daily breads beckon in the front window, alongside a small spread of “things that go with bread,’’ including Silver Moon Creamery cheeses from Westbrook, Maine, salumi, Johnson’s well-chosen wine collection, and really good butter.

Swanberg and a team make the kinds of cakes and cookies - almond horseshoes, oatmeal two-raisin, brownies, and blondies - that lure schoolchildren in as soon as the afternoon bell rings.

Reid and Lou Slingerland (he’s a Clear Flour Bakery alum who is known as “the bagel machine’’) work in the back where they feed Lulu twice daily. On Saturdays alone, the starter contributes to 1,200 crisp-crusted, chewy bagels, including a stellar “everything’’ freckled liberally with poppy, sesame, fennel seeds, and a good bit of coarse salt. No two bagels are alike, and none need the schmear of garlic-herb cream cheese on offer in the cold case, though if you’re a cream-cheese type, it’s great stuff. Fresh from the oven, the bagels crackle just a bit in your hands.

“I’m not a real perfectionist,’’ says Reid. “That’s why I love our bagels. They’re all different because [the dough’s] alive, and because Lou’s had his hands on every one of them. They’re proofed differently, shaped differently, colored differently. And there’s not an endless supply. We’re only gonna make some, and when they run out, that’s it. There’s a lesson in that, especially these days.’’

It’s the same unaffected philosophy they’ve stuck to themselves. The old A&P building they work out of has been home to each of them at some point along the way.

“There’s history here that helps us be successful,’’ says Johnson, who has been approached multiple times about bigger-business moves - like taking wholesale orders or moving closer to downtown Portland.

“Portland’s a great food scene, but it’s a scene,’’ he says. “Here, we’re off the radar just enough that we can do what we want.’’

And they plan to keep it that way. Come summertime, they’re hoping to get a wood-fired oven for organic loaves, baked beans once a week, or even some flatbreads.

Johnson’s envisioning a “speakeasy atmosphere.’’ As he says, “It’d be one more thing to throw a party with.’’