She uses her noodle 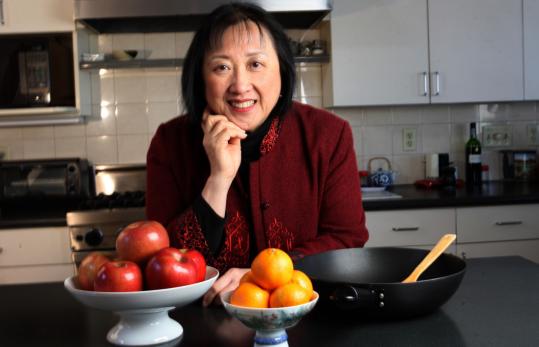 Helen Chen, daughter of the late restaurateur Joyce Chen, is the author of the cookbook “Easy Asian Noodles’’ and has her own line of cookware. (Joanne Rathe/Globe Staff)
By Sheryl Julian Globe Staff / February 10, 2010

Helen Chen’s mother owned one of the first authentic Chinese establishments in the area, Joyce Chen’s Restaurant in Cambridge, which opened in 1954 and ran for 44 years. As a girl, Helen Chen worked there, packing take-out orders and whatever else she and her brothers were asked to do. Chen, author of “Easy Asian Noodles,’’ her fourth book, has been preparing the food of Northern China all these years. She also has her own line of cookware (www.helensasiankitchen.com). For the Chinese New Year, which begins on Sunday, Chen and her husband, Keith Ohmart, celebrate at their own table with friends.

Q. How did your mother convince Westerners to eat authentic Chinese food?

A. In the first few weeks of the restaurant, a customer came in, sat down, had his tea, got up, and said to my mother, “What kind of Chinese restaurant is this? You don’t even serve French bread!’’ Everyone else served it. Eventually we had to put it in because it was the only way to get people to come in. My mother made the first Chinese buffet. We had roast turkey, roast beef, Jell-O, and salad. At the end of the buffet, there were very nice Chinese dishes. Little by little, the Western dishes disappeared. We had people waiting in line to get in. In Chinatown, they had a different menu for Westerners than they did for Chinese.

Q. How do you eat the traditional long Chinese noodles?

A. The whole idea is not to break them. If it’s in a soup, we use a large bowl - they look like 2-quart mixing bowls for Westerners, something large enough to accommodate noodles, vegetables, and a fair amount of soup. If it’s stir-fried, we use an 8-inch plate. We pick up the noodles with our chopsticks - some are still in the bowl because they’re so long - and use the porcelain Chinese spoon positioned under the noodles. Take a bite and let some of the strands fall back into the bowl or onto the spoon.

Q. Why is the length of the strands important?

A. They symbolize a good long life. In old China, when life was very tenuous, you didn’t know if you would have enough food to eat, whether there would be a war.

Q. What are other holiday traditions?

A. Pot stickers, especially for Northerners. My mother was born in Beijing. We always made Peking ravioli. If they’re pan-fried they’re known as pot stickers, if they’re boiled they’re jiao-zi (pronounced yeow tse).

Q. What’s on your own table for the celebration?

A. I’m serving friends a traditional hot pot dinner. The boiling broth is in a pot, different raw ingredients like seafood, meat, tofu, vegetables, are dipped into the pot, then into a sauce. It’s a warming kind of meal, very sociable, the nice heat of the stove, you sit and talk and you eat. At the end, sometimes people will put in noodles. You have this wonderful broth that has all these things dipped into it. I buy glutinous rice cakes - it symbolizes sticking together of family and friends.

Q. Can you settle the question of where pasta originated: in Italy or in China?

A. I’m not sure, I’m not a food historian. I don’t know. It might have come from China or the Middle East. Noodles have certainly been in China a long time.