Bringing the recipe search up to speed 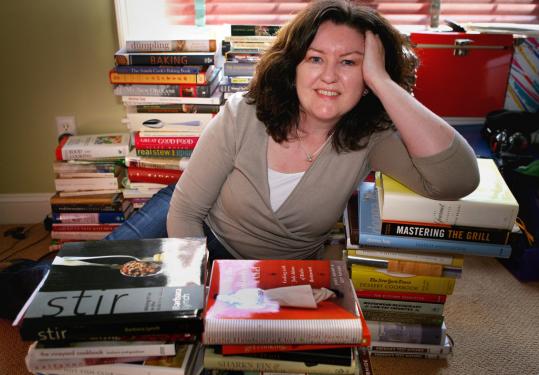 WAYLAND - If you’re like most people, you probably make the same recipes every week because you’re too busy to skim through your cookbooks for ideas.

That scenario is what inspired the authors of a new website, Eat Your Books (www.eatyourbooks.com), an online subscription service that allows you to search the indexes of hundreds of popular cookbooks. Those books may be volumes you already own, where you’ll find new recipes and revisit old favorites. The idea is that you list the books you have on the site so when you do a search, you’re looking through your own library.

“It’s easy to get into a rut,’’ says Jane Kelly, who with her sister, Fiona Nugent (who lives in Auckland, New Zealand), launched the website in September. Kelly, an avid cook and mother of two, sheepishly admits to having 800 cookbooks in her collection but not cooking from them nearly as much as she’d like. “I thought there must be other people out there who liked pulling their own cookbooks off the shelf and looking at the indexes to figure out what to cook,’’ she says.

Eat Your Books does the “pulling’’ for you. Plug in the ingredients you’re interested in cooking or type in a recipe name and the site offers a list of recipes in your books that match that description. The website contains a total of 16,000 titles, and 800 cookbooks have been fully indexed. “These are the top books people are most likely to have,’’ says Kelly. That’s over 180,000 recipes and 6,000 ingredients to choose from.

To get started, you add your list of cookbooks (or as many as you want to enter) into “My Bookshelf.’’ Cookbook author and cooking teacher Molly Stevens entered a third of her 400 volumes and was impressed at how easy it is. “It’s very user-friendly and instinctual,’’ she says. (It’s also pretty fast: I entered 48 of my cookbooks in 35 minutes.)

Once you’ve created your bookshelf, which is essentially your own card catalog, you can search by ingredients, recipe name or type, ethnicity, book title, and author. For example, a search for barley soup yielded five recipes on my bookshelf. In other searches, I discovered I could try out a new brisket recipe (22 options), cook skate for the first time (nine recipes), or bake pumpkin pie (10 choices).

Searching for specific ingredients is a good way to use up leftover items in your fridge. With a head of cauliflower and a can of tomatoes, I could choose from five recipes, including an Indian-style stew from “Vegetables’’ by James Peterson. If I want to make shrimp with, say, scallions and ginger, “Blue Ginger: East Meets West Cooking With Ming Tsai’’ offers the perfect solution with its Wok-Flashed Salt and Pepper Shrimp.

Finding forgotten recipes in books you haven’t looked through in years “is like rediscovering an old friend,’’ says Stevens. She says that when you search the Web for recipes, you get dozens of hits but you can’t be sure of their quality. “And you’re ignoring your own books,’’ she says. Eat Your Books offers 30 days for free; membership costs $25 per year. For a limited time, a lifetime membership is $50.

The site allows you to keep track of your family’s “Favorite Recipes’’ and tag those you’re eager to try as “Do Laters.’’ When you can’t remember which book last year’s chocolate fudge cake is in, you can plug in a few key ingredients or the recipe name and locate it. The system can tell you if the book is in your kitchen, basement, or at the Cape house, if you’ve entered this data in the first place. You can also get the site to generate a shopping list. The one thing it doesn’t provide is the recipe’s page number because of the differences in book editions, says Kelly.

The system isn’t foolproof. It’s a huge database that sometimes requires specific information. In a search for the ingredient curry, it’s necessary to specify curry powder (169 recipes on my bookshelves) or paste (4 recipes). Rice noodles must be entered as “noodles-rice,’’ but there are drop-down menus to help you choose. Playing around with the program, you’ll learn its quirks and nuances. And not every book you own will be indexed on the site. But you can request indexing, and Kelly says they’re working hard to get all new, good cookbooks in the system.

College students and other typists who work from their homes do the indexing. Kelly’s expertise comes largely from a Web-based cookbook sales business she ran in London years ago. Her sister is the technical end.

One day, if you’re looking around the site and decide you’re sick of all your own books, you can review the entire book library. Recently, when a search for chocolate pudding pie yielded no results on my own shelves, the site did find four matches, including one recipe in the well-regarded “The Baker’s Dozen Cookbook.’’

A possible gift to myself?