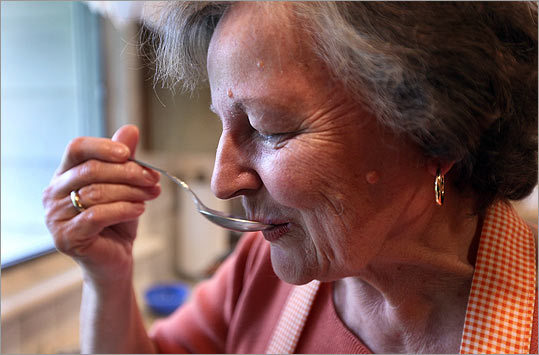 MILTON - Sometimes the warm-up is more important than the event itself. That’s certainly the case for Christmas in Poland, where, as in many Eastern European countries, Christmas Eve, known as Wigilia, brings a bigger celebration than Christmas Day.

Lila Pronczuk makes an old-fashioned menu. “For Wigilia, there is no meat,’’ she explains, standing over a pot of simmering vegetable broth in her spacious kitchen.

Christmas Eve is a day of fasting; a meatless feast is traditional as the first evening stars appear. When the extended family is seated at the dinner table, they will break a special Christmas wafer and make wishes for the coming year. And then comes the parade of dishes, which might include herring, carp, sauerkraut, pierogi, and mushrooms in one form or another - or more than one form. “Mushrooms are a staple for Christmas Eve,’’ says Pronczuk.

At her Wigilia table, mushrooms go into a fragrant soup, rich but light, given substance with homemade egg noodles known as lazanki. The soup, called zupa grzybowa, brings an authentic taste of Poland, because the mushrooms themselves - a special dried forest mushroom known as borowiki - are sent to Pronczuk from Poland by her 98-year-old father-in-law, a retired professor in Warsaw. The gnarled mushroom caps, strung together from smallest to largest, dangle from the handle of one of Pronczuk’s kitchen cabinets.

Pronczuk was born in Germany to Polish parents who had been sent to labor camps during World War II. They remained in Germany for a few years after the war, then moved to the United States when Pronczuk was a small child. She spent her early years in the old West End and in Dorchester, and met her husband-to-be at St. Hedwig church in Cambridge (now closed). She moved to Poland as a young bride and raised three children, now grown, until martial law was imposed, in the 1980s.

It was during that lengthy sojourn in Poland that she learned to cook the traditional dishes she now prepares.

“When I got married, I didn’t know how to cook much,’’ she admits. She picked up a few things from her mother-in-law and learned the rest on her own, and now she’s got a fine reputation as a cook within her community. Pronczuk’s special poppyseed cake (the recipe is a closely guarded secret) will be sold at Our Lady of Czestochowa’s Christmas fair in South Boston. This week, she turns out 40 loaves of the rich, festive delicacy.

Mushroom soup is a simpler affair, although the mushrooms need to be soaked a day in advance. Borowiki mushrooms lend the pot a special flavor. But the key to good soup is a lot of vegetables in the broth. Pronczuk’s combination of carrots, parsnips, leeks, celery root, and more yields a depth that’s rare in a meatless broth. Lazanki look like they require a practiced hand, but at Pronczuk’s urging, a visitor gives it a try and finds it only slightly challenging. The noodles add a bit of chew, and a small quantity of light cream enriches the final soup. It’s refined, with a delicate mushroom essence, and seems a fitting start to a multicourse holiday meal.

On Christmas Eve, Pronczuk serves it from an elegant tureen surrounded by her finest tableware. She takes great care with every detail, down to cutting the mushrooms just so. “For Wigilia,’’ says Pronczuk, “everything has to be perfect.’’