THIS STORY HAS BEEN FORMATTED FOR EASY PRINTING
Food and travel

From farm to table, a French immersion 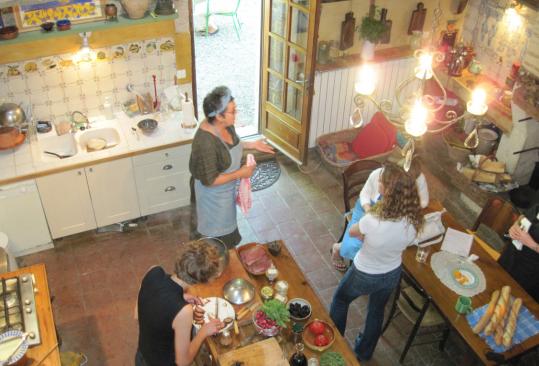 Students in Kate Hill’s Kitchen-at-Camont cooking school get to work in the large kitchen, which occupies most of the ground floor of Hill’s 18th-century brick and stone farmhouse. She offers weekend workshops, day classes, and long-term study. (William A. Davis for The Boston Globe)
By William A. Davis Globe Correspondent / December 9, 2009

STE. COLOMBE-EN-BRUILHOIS, France - In this agriculturally diverse and rural region in the French southwest, students at Kate Hill’s cooking school learn about the distinctive cuisine of Gascony from the ground up. “We go to the village markets, and out into the countryside to meet local cooks and butchers and also farmers, the people who turn dirt into food,’’ says Hill. “The school is a culinary retreat where students, chefs, and artisan food producers meet and work together.’’

Hill has been running Kitchen-at-Camont for 18 years. Before she started, she did extensive renovations on the 18th-century brick and stone farmhouse, named Camont, where classes are held. “There was a tree growing where my kitchen is now,’’ she says. The large space, which occupies most of the ground floor, is where she offers weekend workshops, day classes, and long-term study. Besides hands-on cooking lessons, programs include weeding gardens, planting fruit trees, feeding chickens, and other farm chores. A typical weekend of two classes comes with two nights’ lodging and costs about $1,114.

There are two double rooms in the house for rent; larger groups usually stay at an inn within walking distance of Camont. Long-term students, those learning to be butchers and sausage makers, stay nearby with farm families. Hill lives on the Julia Hoyt, a barge anchored at the foot of a vegetable garden on the Garonne Canal.

Most cooking students are Americans, and since 9/11, says Hill, there has been a noticeable change in American visitors to France. There are fewer students, she says, but the ones who come have a purpose. “Now they’re more serious and want to learn something about local culture, not just be cultural voyeurs.’’

The regional cuisine of Gascony is country cooking, says the teacher, but, she adds, it’s “food with integrity. It’s not so much about technique as putting good food on the table in every season.’’ Ubiquitous ingredients include duck, which is prepared in many ways, prunes, and Armagnac, a brandy made locally by small producers. “Armagnac adds rustic finesse to regional dishes,’’ says the cook.

One of the things that gives Gascon food a distinctive taste is quatre épices, literally four spices, typically a mixture of ground nutmeg, ginger, cinnamon, cloves, and an uncounted fifth ingredient of black pepper. “It should really be called five spices,’’ says Hill, “but in Gascony it’s just taken for granted that any spice mix will include black pepper. These spices are to dark meats like duck what thyme and bay leaf are to white meats like chicken.’’

Among the local signature dishes she teaches are Gascon salad, which includes duck, pate of foie gras, and prunes; duck breasts stuffed with prunes or foie gras, and, of course, duck seasoned with quatre épices. She also likes favorites such as wild mushroom pie and roast pork with prunes and shallots.

Hill, born in Hawaii and raised in California, had spent several years as skipper and chef of the Julia Hoyt, her own charter canal barge, which she filled with passengers to cruise the canals of Europe. While traveling on the Garonne Canal, she developed engine trouble and stopped for repairs. “I was looking for a good place to park my boat,’’ she says. From where she tied up on the canal, she could just see the top of the abandoned Camont farmhouse. She investigated, saw possibilities, and bought the place that now houses her school. That was almost 20 years ago. “I’ve been happy ever since I came here,’’ she says. The region is famous both for robust food and feisty literary characters such as Cyrano de Bergerac and D’Artagnan of “The Three Musketeers.’’

“Teaching allows me to get deeper into something that I love,’’ she says. Programs are meant to give students the same sort of experiences and learning opportunities that she had when she first started cruising the Garonne Canal.

The canal, which parallels the Garonne River, runs through a lush countryside dotted with farms and many small towns similar to this one. “The canal is really like a long village and the weekly farmers markets held along it are phenomenal,’’ says the cooking teacher. “A sense of the palate is what this place is all about.’’