Bastianich makes everyone feel at home 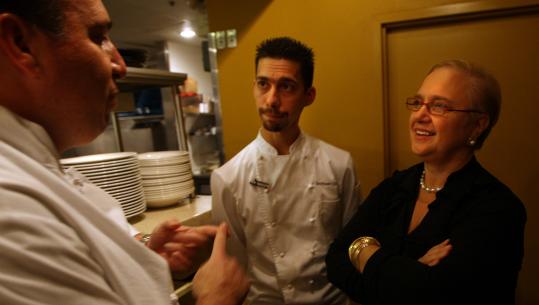 WELLESLEY - It’s a big night for Matthew DiBiccari, the improbably young chef de cuisine of Alta Strada restaurant. DiBiccari is rail-thin, quiet but intense, and unmistakably Italian-American. The Lynnfield native, whose immigrant grandmother inspired his culinary career, says that for two days, he and his staff have been perfecting seven dishes from Lidia Bastianich’s latest cookbook, scaling up the recipes for tonight’s 100 guests.

For many cooks, Bastianich, the celebrated TV personality, is the Italian grandmother they never had, sharing recipes, stories of the old country, and wisdom. For close to a decade, her PBS cooking shows have provided a warm antidote to the spikey-haired emcees and chesty babes on other shows. Whatever Bastianich is cooking, the message is: Come to the table and eat together. “When a family cooks my recipes, they are inviting me into their home,’’ she says, spooning fragrant leg of lamb with olives and rosemary onto a plate. “I take that seriously.’’ Bastianich is in town to promote “Lidia Cooks From the Heart of Italy,’’ a blend of memoir, travel guide, and art history primer.

DiBiccari and the Alta Strada staff have chosen the lamb as the main course. It was preceded by tortelli, pasta filled with Swiss chard and ricotta. As she tastes it, she smiles and gestures to the kitchen, in particular to the line cooks. “Delicious. Very nicely done!’’ DiBiccari looks down, trying hard to suppress a smile and a swell of pride.

Bastianich, 62, knows about the importance of feeling at home. She was born in Istria (now Croatia), 11 days after Italy was forced to give up the region to the newly formed Yugoslavia. Like many Italians living there, her family fled to Italy, then emigrated to New York. As a girl she worked in several Italian restaurants, then two of her own, before opening Felidia in 1981.

She now owns five restaurants (in New York, Pittsburgh, and Kansas City), a TV production company (Tavola Productions), and, with her son Joe, two vineyards in Italy (Azienda Agricola Bastianich in Friuli, and La Mozza in Tuscany). With her daughter, Tanya, she founded a travel company that offers tours of Italy focused on food, art, and history.

Increasingly Bastianich has become an ambassador for Italian culture and an icon for Italian-Americans. This book, her sixth, recently held the No. 1 sales ranking on in the categories of Italian cooking, Italian travel, and Italian history. Bastianich’s own occasionally out-of-focus travel photos are interspersed with professionally styled shots of food. The book is personal and a learning experience - much like spending time with her. It also features innovations like color-coded ingredient lists, and engaging paragraph-long recipe “steps’’ that neatly encapsulate her own take on the dish if she were cooking it herself.

What delights many of her female fans is that the whole family likes Bastianich. At a book signing in Wellesley earlier that evening, mothers brought their daughters, and, just as often, daughters brought their mothers. There’s a warmth and maternal wisdom about Bastianich. Viewers will recognize the phrase with which she closes each episode of her show: “Tutti a tavola a mangiare!’’ (Everyone come to the table to eat!) It’s a powerful precept in an era of disconnection. Pouring me a glass of wine, she offers advice on my 14-year-old niece, the same advice she would give anyone dining with teenagers. “Get her to the dinner table, every night,’’ she says. “When she’s hungry, those defenses are down. And the food is delicious.’’ She motions to a plate of farro with roasted pepper sauce, and potatoes with peperoncino. “Then you can talk with her.’’

Those potatoes, made with starchy russets, are simply boiled, peeled, salted, and then elevated to a stunning dish with a drizzle of olive oil heated with garlic, parsley, and crushed red pepper. The recipe will change the way you think about boiled potatoes.

Even Alta Strada owner Michael Schlow looks to Bastianich for approval. When a serving of lamb goes to a table with a sauce that doesn’t cling to the meat, Schlow, a “Top Chef’’ veteran, goes running off to the kitchen like a schoolboy scrambling to please his teacher.

Every seat at the restaurant has been reserved on this night. With the food come wines from the Bastianich vineyards. From her spot at the end of the bar, Bastianich surveys the room. It’s animated and content, which is what good food and good wine are supposed to do.

Dessert goes out, a torta di mandorle (almond torta with chocolate chips), and DiBiccari is done. He smiles shyly at Bastianich, joins some guests at one of the tables, and settles in. There’s no fanfare, no grandstanding. Just everyone at the table, to eat.

Bastianich didn’t invent the idea. She just perfected it.