THIS STORY HAS BEEN FORMATTED FOR EASY PRINTING
G Force: Ron Bachman 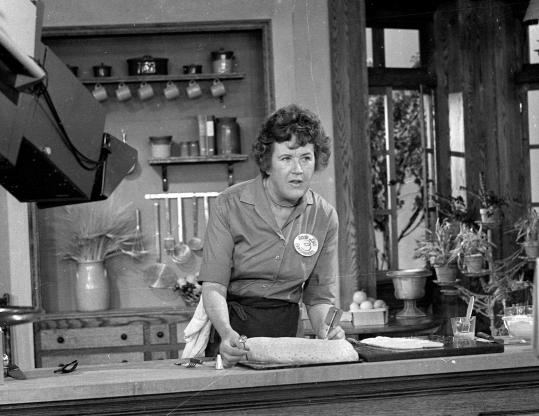 Associated press/File
Ron Bachman, WGBH director of programming, says the station has about four dozen episodes of “The French Chef’’ with the late Julia Child (above, in 1970) ready for air. (Associated Press/File
)
By Mark Feeney Globe Staff / November 4, 2009

On Saturday, WGBH will begin airing old episodes of Julia Child’s “The French Chef’’ weekly at 12:30 p.m. The station has occasionally broadcast multiple episodes on special occasions, but now the series is back as part of Channel 2’s regular Saturday afternoon cooking lineup. Ron Bachman, the station’s director of programming, recently talked about bringing back Julia.

Q. Is this idea “Julie & Julia’’-generated or does it predate the movie?

A. Yes and yes is the answer. We’ve actually experimented in the last couple of years with the occasional “French Chef’’ marathon, usually pegged to a holiday. But there was a new focus this summer with the movie coming out. We ran a special, with Meryl Streep and Julie [Powell], and there was a strong enough response to make us think of taking a different approach. My colleague Maria Bruno-Ruiz, the program manager, said maybe we should put this in our regular cooking block on Saturday afternoons.

Q. Is there a set number of episodes or is the run open-ended?

A. It’s essentially open-ended. I don’t know how many episodes there are in total. These are old tapes. Some are more than 40 years old, all told, and not all have gone through the conservation process to make sure they are OK for airing. Those that haven’t gone through it are too physically fragile. So there are about four dozen programs ready for air. If there’s enough of a response, we’ll look into restoring more.

Q. You could have a Julia Channel.

A. I don’t know if we’ll ever go that far, but there’s certainly more inventory to be mined if we choose.

Q. How do you decide which episodes to show?

A. It’s really a very pragmatic situation here. The episodes we’re planning to air were episodes cleared for home video distribution - that’s why they’re in a state ready to be aired. Those episodes were presumably chosen because they were particularly memorable or popular.

Q. Do you have any favorites?

A. The one where she whacks the chicken on the table is always good for a laugh, but beyond that I can’t say I particularly do.

Q. How do the production values hold up?

A. It’s interesting how little things have changed in some ways. The format was really established with “The French Chef.’’ The first show of its kind, it really spawned this genre. Many food shows give you the chef in the kitchen, preparing the ingredients, showing you how to make the dish. That said, now you’re seeing more and more shows that go out of the studio, out of the kitchen. They incorporate travel elements, showing where the dishes come from, that sort of thing. You can see that in shows we air, like “Simply Ming’’ and “America’s Test Kitchen.’’ It’s interesting to note that several of our most popular shows feature chefs from this area, which Julia was. We were the first.

Q. The first and still the best?

A. We’d like to think so, but we’ll leave that to others to decide.