Restaurants offer chicken fingers, but it could be the small set want sushi or pho, fajitas or dumplings

Oliver Bentley is 8 years old. His sister, Anna, is 6. At Zenna Noodle Bar in Brookline, the two are waiting for their Asian noodle soups to arrive. In the meantime, they’re eating fresh rolls with peanut sauce and clams. “They’re interested in food,’’ says their father, Chris. They like sushi, Mexican, and Italian. Anna loves lox, and she’ll often have capers as a snack. As a baby, Oliver adored baba ghanoush.

Down the street at the Japanese restaurant GinGa, Jack Broomhead, 5, is gleefully sucking down salmon sashimi and shrimp tempura. And at Dok Bua Thai Kitchen, Hannah Siegenberg, 10, and her sister Julia, 17, are drinking tea and sharing a Thai appetizer of dried shrimp, lime, chilies, and Chinese broccoli wrapped in spinach leaves. Hannah’s choice for where to celebrate her recent birthday: the Japanese restaurant Fugakyu.

Children’s tastes have become more sophisticated. Yet look at kids’ menus around town and you see the same dishes again and again: chicken fingers, grilled cheese, spaghetti, hot dogs (as if you need the list recited for you).

“It’s a vicious cycle,’’ says Nancy Tringali Piho, author of the book “My Two-Year-Old Eats Octopus: Raising Children Who Love to Eat Everything.’’ “Restaurants have those things on menus because they think that’s what parents want, and parents order them because they’re there.’’

The obvious problem with children’s menus is their nutritional value. Offerings are often high in fat, sodium, and sugar. “Most kids’ menus don’t even come with a vegetable,’’ says Allison Lauretti, lead clinical psychologist in the Optimal Weight for Life Program at Children’s Hospital Boston, which evaluates and treats children who are overweight. “When we go out to dinner, we have to order a vegetable off the regular menu to give to the kids.’’

This has started to change. In a survey of hot trends for 2009 conducted by the National Restaurant Association, nutritionally balanced kids’ dishes ranked number 4 (right between organic produce and new cuts of meat), mentioned by 81 percent of the more than 1,600 chefs polled. Legal Sea Foods, for example, serves kids’ meals with fresh fruit and vegetables, unsalted fries, and nuggets made from naturally raised chicken. (It was named the best family restaurant in a 2008 Parenting magazine poll.) At Aura in the Seaport Hotel, chef Rachel Klein has instituted Fine Dining Family-Style nights, where the food is made in house, down to the seasonal purees for babies. “It’s not a freezer-to-fryer kind of experience,’’ she says. “If you’re going to feed your kid pizza - and more power to you, I know I do - at least you know it’s being made and not out of a box.’’ And at chain restaurants such as Denny’s, Uno Chicago Grill, and Red Robin, parents now find some lighter options, whole grains, and fruits and vegetables on the menu.

But even when kids’ food is healthier, it is often, as Gabriel Fortney, 8, of West Roxbury succinctly puts it - “boooring!’’ A baked chicken finger is still a chicken finger. Chefs work hard to craft interesting food for adults. If a restaurant goes to the trouble of creating a children’s menu, it should offer them a comparably interesting experience. In a lunch bag or at home, peanut butter and jelly is lovely. At a restaurant, peanut butter and jelly is lazy. It’s time for kids’ menus to grow up.

“Everyone likes chicken fingers and burgers, but they’re pretty boring and always the same,’’ says Connor Daitch, 13, of Norton.

“I think kids’ menus are unimaginative,’’ says Matthew Amster-Burton, who writes about eating adventurously with his daughter, Iris, 5, in the book “Hungry Monkey.’’ “I’m not so much concerned about the health aspect, but for me the fun of having a kid and being a person who loves food is sharing the food I love with my kid. The kids’ menu says exactly the opposite. It says: I’m going to eat this and you’re going to eat that, and we’re not going to have a shared experience.’’

That’s the heart of the matter: the shared experience, what eating is all about. But if urging kids to consume Japanese soba and Mexican mole feels too foodie-yuppie (fuppie?), consider how eating habits are formed. While some food preferences are innate, others are learned. “Kids tend to prefer sweets initially,’’ Lauretti says. “The two most important predictors after that are exposure and role modeling.’’ Then there’s the behavioral reinforcement of giving children the same menu items over and over, accompanied by fun toys and crayons and games. “It forms the foundation of what they come to expect when going out for meals,’’ Lauretti says. Parents don’t want chicken fingers for dinner - not all the time, at least. And parents don’t want their children growing up to want them either.

“I want my kid to eat healthy and have a really broad experience with food, flavors, and textures,’’ says Klein. “I don’t want him to be grilled cheese guy.’’ (Her son loves Indian masala sauce, fajitas at Acapulcos, tomatoes with aged balsamic vinegar, and medium-rare steak.)

I see that thought bubble above your head, the one that reads: “But so many kids are picky eaters!’’ Let’s think of it as discerning. They like what they like, as adults do. It’s just different stuff. (Witness Elmo.)

Research shows that children prefer colorful food, Lauretti says. “Most restaurant food, like macaroni and cheese or chicken nuggets, has less color, yet they come to prefer that. Take a bunch of vegetables and make a smiley face out of them on the plate. If you serve a salad as you would to an adult, it’s not going to seem so interesting to them.’’ Many kids will choose apples over fries with their Happy Meals at McDonald’s, she says: The fruit is colorful, and what they really care about is the toy.

Piho suggests restaurants serve smaller portions of the same things adults can order, perhaps with spicy or “super-weird’’ dishes toned down a little. “It needs to look good,’’ she says. “But it should be a modified version of what an adult might expect a nice entree to look like.’’

Amster-Burton recommends variety. “Kids don’t like to be presented with one food and told, ‘This is one thing and you’re going to eat it.’ It’s a tough position to put a kid in psychologically. It will make the most mild-mannered kid a rebel.’’ Adults don’t like it much either.

This is why sushi - all raw and fishy, the quintessence of what you might think kids would find “yucky’’ - can in fact be the perfect kid food. It’s colorful. There’s variety. It’s fun to dip it in soy sauce. It’s fun to pick it up and eat it with your hands. Less expensive but equally satisfying are Chinese dumplings, seldom more than a few dollars per plate.

Putting more variety and sophistication on kids’ menus isn’t just good for children and the parents who love them. It’s good for restaurants. Rich Vellante, executive chef and executive vice president at Legal Sea Foods, notes that the kids’ menu offers fun-to-eat popcorn shrimp, half-lobsters with the meat cut up, even fish-shaped cheese ravioli. “Instead of just providing chicken fingers and things of that nature, we felt strongly we should also offer items jump-starting children into seafood.’’

Klein, the chef at Aura, says, “Kids are our future customers.’’

Nonetheless, she believes chicken fingers are what kids want nine times out of 10. For now, she may be right. Lauretti says children often need to be exposed to a new food a full 15 to 20 times before it’s clear whether they don’t like it or are simply reacting to unfamiliarity.

So let’s give the kids some options. Continuing to offer them the same menu items again and again is like using baby talk with a grade-schooler: unnecessarily simplistic. Just ask adventurous eater Anna Bentley, who stops using her empty clamshells as castanets long enough to answer a question.

“Anna, is there any food you wouldn’t try?’’

“Yes,’’ she replies after a little thought. “Light bulbs.’’ 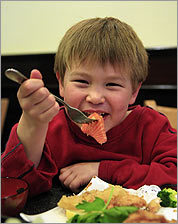