Centuries of nectar in the heart of Mykonos 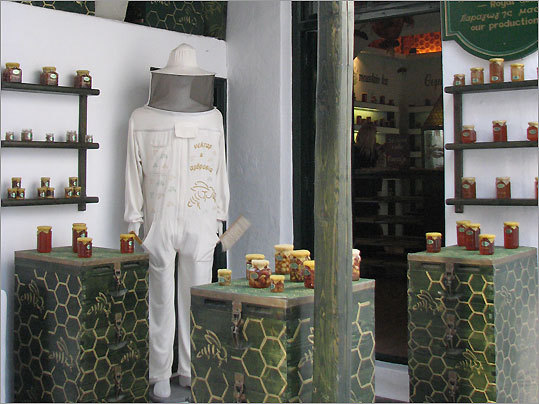 Except for the beekeeping suit on the mannequin, Nektar and Ambrosia looks almost like an apothecary in the middle of Mykonos Town. But in this shop, honey is the remedy for many ills. (Necee Regis for The Boston Globe)
By Necee Regis Globe Correspondent / September 23, 2009

MYKONOS TOWN, Greece - The narrow, winding streets of the largest town on this small island are like a maze within a maze. While meandering past boutiques offering trinkets for tourists (albeit some quite expensive trinkets), it’s easy to lose one’s sense of direction as the bright sun bounces off the whitewashed walls and the cerulean sky matches the intensity of brightly painted shutters and doors.

In the midst of this delightful confusion is Nektar and Ambrosia, a shop selling locally made honey. If in your mind you picture “honey shop’’ as something dark and funky, think again. The shop is more like a high-tech apothecary - with sculptures of large bees dangling overhead. Along the white interior walls, jars of the golden substance glisten, spotlighted across evenly spaced shelves or encased in stylish glass hives. This is Mykonos, after all, a destination for the chic and the famous, or those who aspire to be either.

On a recent afternoon, salesclerk Nikoleta Roumeliotov cheerfully invites visitors to sample varieties of honey thyme, eucalyptus, fir, and mountain tea, while extolling the healthy benefits of each. “In general, thyme is the most therapeutic,’’ says Roumeliotov. Pointing to a salve made of propolis, a natural resin collected by bees to seal gaps in their hives, she adds, “You use this externally, for wounds or burns.’’

Nektar and Ambrosia is a 200-year-old family-run business that uses nectar from hives on the island and in Nafplion, a town in the Peloponnese. Eighty acres on Mykonos alone are covered with over 1,000 varieties of wildflowers.

In a private back room, the unassuming owner Nikos Reppas is chatting with a local fisherman at a scratched wooden desk surrounded by empty jars and scientific tomes extolling the virtues of honey, bees, and related topics. Above the doorway, old black-and-white photos of his grandparents hang in simple frames. “It’s not that you eat honey because it’s sweet or you like the taste, but it’s good for the body,’’ says Reppas, speaking with Roumeliotov acting as translator. “It’s filled with vitamins, acid, and minerals.

“When I was 3 years old, I went to the beehives with my father,’’ says Reppas, recalling the first time he tasted honey. “I ate some and then a bee stung me.’’ He took off running with the bees in hot pursuit. “I was wearing a red shirt and they were bothered and aggressive.’’ Reppas laughs about this early experience. He believes that stings are good for arthritis, and other illnesses “because the bees eat pollen that goes into the sting.’’ Quoting statistics from studies in Italy, Reppas adds, “The sting goes into the whole system like a human growth hormone.’’

The store also sells royal jelly, a substance secreted from the salivary glands of worker bees as food for the larvae. Reppas, who occasionally trades this product for fresh seafood with the aforementioned fisherman, recommends it to boost energy levels. “Royal jelly has vitamins and amino acids,’’ he says. “It’s a natural steroid.’’ He suggests putting a little jelly on the end of a toothpick and placing it under the tongue, followed by a spoon of honey and pollen.

For those who love the taste of honey, regardless of its alleged healing properties, the honeycomb-sealed jars at Nektar and Ambrosia are perfect mementos of this sun-drenched island. According to Reppas, the pure, strong flavor is the result of never using chemicals on their land, and of the wildflowers, which he refers to as “not calm’’ flowers, meaning not commercially produced.

Also for sale are cellophane-wrapped bars of pasteli, a traditional Greek dessert made with honey, sesame seeds, and nuts. A quick pick-me-up, pasteli is most similar to an energy bar, making a beeline to this shop even more worthwhile.