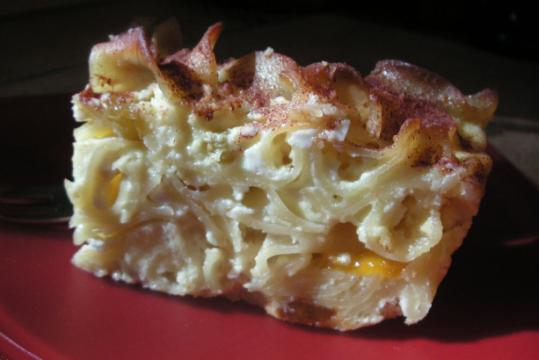 Lokshen kugel is an important part of Jewish holiday tables. This sweet, creamy, eggy noodle pudding is a standard menu item at the meal next Monday night after a day of fasting on Yom Kippur. My mother, with whom I consult about traditional dishes before I begin cooking, was at the supermarket checkout line in Miami, with ingredients for her pudding on the belt. The woman in line behind her offered some unsolicited advice. “I make the best noodle pudding around,’’ she announced. “Always add two more eggs than the recipe calls for!’’ Of course I added two eggs to my recipe, which includes plenty of butter, sour cream, cottage cheese, farmer cheese (a pressed curd cheese), golden raisins, and apricot preserves. Results were very creamy. Considering the amount of dairy goods, it probably would have been anyway.

2. Bring a large pot of salted water to a boil. Add the noodles and cook, stirring occasionally, for 8 minutes or until they are tender but still have some bite (they should be slightly underdone because they’ll cook more later).

3. In a bowl, combine the sour cream and raisins; set aside for 10 minutes.

4. Drain the noodles into a colander and return them to the pot. Add the butter and stir well. Stir in the cottage cheese, farmer cheese, sugar, vanilla, a large pinch of salt, eggs, and sour cream mixture.

5. Pour half the noodle mixture into the baking dish. Add the apricot preserves in spoonfuls here and there. Top with the remaining noodle mixture. Sprinkle with cinnamon-sugar.

6. Bake the pudding for 1 to 1 1/4 hours or until the mixture is set. Let it settle for 5 minutes before cutting into squares. Debra Samuels