Her kingdom is in Vermont, where her Mexican food rules 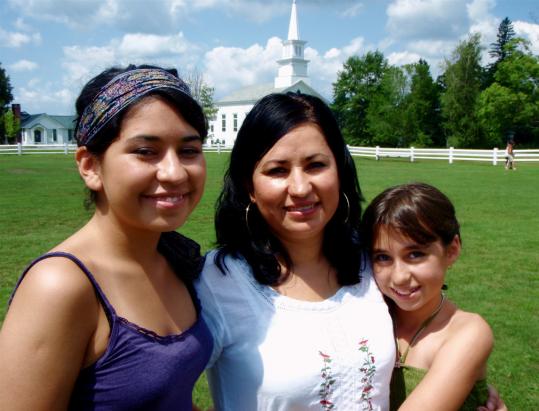 Chole Adams with her daughters Annie (left) and Teresa, on the common in Craftsbury, Vt. (Photos By Aaron Kagan for The Boston Globe)
By Aaron Kagan Globe Correspondent / September 9, 2009

CRAFTSBURY, Vt. - Eating Chole Adams’s cooking is nothing short of disorienting, and not because of the tingling sensation induced by her homemade salsa verde.

A native of Hidalgo de Parral in Chihuahua, Mexico, Adams, 40, now lives and cooks in Vermont. Thanks to her, some of the best Mexican food in New England is available in the Northeast Kingdom. She sells her fare primarily at farmers’ markets in Hardwick and Craftsbury. While the menu varies, offerings usually include gorditas, burritos, tamales, her own corn and flour tortillas, salsa verde, and horchata, the latter being helpful in quenching the former.

Before she became an integral part of the local cuisine, Adams was skeptical of offering her food to customers up here. “I was scared, wondering if people here would like my stuff,’’ Adams says. “Then I thought, Americans like bread, I’ll make some burritos, and pretty soon those burritos were kicking butt!’’

On any given day, the long lines for her food might include locals and tourists, farmers and hunters, newcomers and repeat customers. Some are Mexican aficionados, others still find a “tor-till-a’’ foreign.

One Hardwick customer approaches Adams skeptically. “Do you have any salsa that won’t kill me?’’ says Wendy Valliere at the farmers’ market.

Other devotees are natives of Mexico, many of whom work on local farms. Adams offers them two valuable services: She provides comfort food from back home and uses her language skills and community connections to advocate for their rights as seasonal laborers.

Many of Adams’s ingredients are grown on those very farms. While her recipes remain faithful to her heritage, the ingredients she uses hail largely from Vermont.

Sometimes she obtains what she needs through a veggies-for-tamales barter system with area farmers, and her pork is raised by friends who keep pigs. She also patronizes the Buffalo Mountain Co-op and Café in Hardwick and purchases from online Mexican groceries when necessary.

Despite some difficulty adjusting to life in the United States, Adams’s presence is appreciated in a region better known for its sweeping vistas than piquant cookery. “It’s much needed,’’ says Caitlin Irwin, manager of the Hardwick market.

Adams describes her first three years here in the United States, in Phoenix, as the most difficult of her life. “When I came here I ordered like I did in Chihuahua, saying give me $2 of this and $2 of that. They looked at me like, who is this idiot from the mountains?’’ she recalls.

She also struggled with English until she realized she needed to defend her children from racial slurs. “Then I learned right away,’’ she says. “And then nobody messed with my kids.’’ Her oldest, Thomas, is now a firefighter in the Air Force.

Despite the immense popularity of her food - she often sells out before the end of the market - her first experience cooking for Americans did not bode well. “I wanted to make some tamales so bad, so I got corn husks and made them all day. But my in-laws didn’t like them,’’ she recalls. She is married to Ray Adams, a native of the area who owns a motorcycle shop in Craftsbury.

Today, Chole (pronounced CHO-lay) stays true to her culinary roots and serves as an ambassador for her cuisine. “She redefines what people think of as Mexican food,’’ says Cynthia West, who teaches a course on culture and cuisine at Johnson State College. “Chole does a unit on Mexican food and basically debunks all the myths. Until then, some students think Mexican equals Taco Bell.’’

Adams’s food is not only authentic and sustainably sourced, it’s also affordable and reliably delicious. The tortillas are always hearty and pliant, the meat moist and well seasoned, and the horchata rich, refreshing, and not at all too sweet.

It’s all very difficult to resist. And even if you know Adams is cooking at the market, it’s still a surprise to find her there.

Hardwick Farmers’ Market is at Granite Junction on Route 15 west on Fridays from 3-6 p.m. until Oct. 16.