A bakery with all the right moves 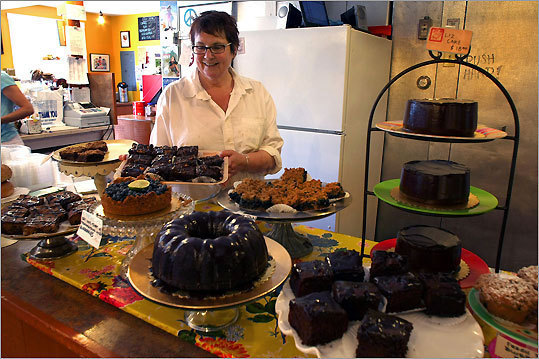 PROVINCETOWN - The beginning of Race Point Road, a turn off Route 6 that leads to a magnificent 8-mile stretch of National Seashore beach, is home to what passes on the Outer Cape for a small shopping plaza. There’s a yoga studio, a dog grooming business, a caterer, and a design shop. Off to the side is a nursery. Tucked behind them all, in a big, red barn-like building, is Connie’s Bakery and Fresh Food.

Connie’s has a homey, welcoming feel, with a little late-’70s vibe. The walls are lined with wire bakers’ racks on which muffins, scones, cinnamon rolls, and breakfast cakes sit beside crostatas and cookies. Richard Goldberg, partner of owner Connie O’Meara, bakes a variety of breads. O’Meara has a devoted following from the many years when she operated Connie’s Bakery at The Lobster Pot. Later she moved the bakery to Clem & Ursie’s (now closed) on Shank Painter Road, where she stayed for over a decade. She opened Connie’s Bakery and Fresh Food two summers ago.

A long, communal table in the middle of the room invites guests to sit down. More open racks hold pies, cupcakes, homemade granola, and jam. Another display case shows off fancier desserts such as key lime tarts with glazed berries. There’s an espresso bar, self-serve coffee, and the aromas of yeast and cinnamon in the room.

On a recent Saturday morning, a constant stream of customers pass through the wooden screen door, some parking bikes in the rack outside, others sipping coffee and nibbling pastries at the picnic tables around the bakery.

A blueberry “pancake,’’ sold in individual wedges, is one of the more unusual items and happens to be O’Meara’s favorite. It looks like a cake, but tastes just like a fabulous blueberry pancake. O’Meara says she achieves the effect by soaking the batter with maple syrup and baking it in a deep pan, so the end result is denser than other cakes. The sweet (but not too) cinnamon rolls are a generous size, but so flat you wonder whether they’re yeasty. They are, but O’Meara explains that after she proofs the dough she pushes it down, adds more cinnamon, and bakes it right away.

Fresh fruit crostatas are built on buttery, flaky crusts that envelop whatever fruits are in season. Recently, that meant blueberry peach (blueberries came from a neighbor who had picked them on nearby dunes); strawberry rhubarb crostata might also be coming out of the oven.

With its proximity to the beach and hiking and biking trails, Connie’s is a perfect stop for sandwiches, salads, and other picnic provisions. Glen Lane, a stylist at Waves on Shank Painter Road, says a visit to Connie’s is his reward after a ride on the Province Lands bike path. Ralph Vetters, who has a house in North Truro, routinely pops in after picking up plants or other supplies at the nursery. And the proliferation of yoga attire attests to its popularity among clients of the neighboring studio.

And of course, all the other locals. Connie’s moved and her customers came with her.