Brodetto a fine kettle of fish, clams, and. . . 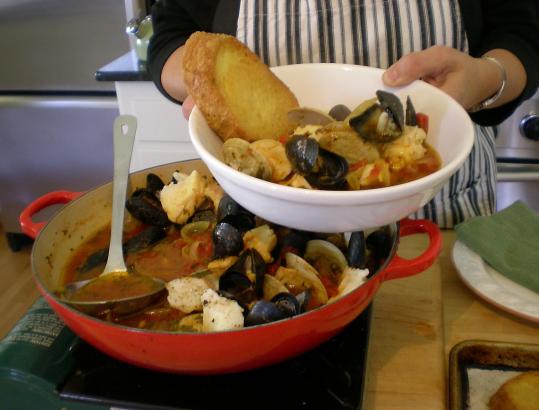 Recipes for brodetto are many and varied, but they all require a variety of shellfish and at least one white fish. (John Stark for The Boston Globe)
By John Stark Globe Correspondent / August 12, 2009

Think of brodetto as bouillabaisse’s less-celebrated Italian cousin, not as fussy and easier to spell. It’s found in towns and provinces up and down Italy’s Adriatic coastline. An article in The New Yorker by Mimi Sheraton last year put brodetto up there with the Trevi Fountain and Sophia Loren.

Italians vary the ingredients, depending on what’s swimming by. Try it if you see it on a menu, and if you like to cook with seafood, you can make the dish easily with catch from the New England coast. There are unifying characteristics in all brodetto recipes. They require a variety of shellfish and at least one white fish. Because Adriatic fish tend to be fatty, vinegar is added to the broth to help cut the fat.

Purists insist that brodetto has to include scorpion fish, whose poisonous tail is removed before cooking. On this coast, brodetto can be made with Wellfleet clams, shrimp, scallops, mussels, and chunks of monkfish, cod, and halibut.

That’s the lineup at Bridgeman’s in Hull, where brodetto is served over squid-ink pasta and the soup has a plum tomato-based broth. “It’s one of our better items on the menu and one of the least ordered,’’ says executive chef Jamie Mohn. “People just don’t know about it.’’

Walter Potenza of Walter’s Ristorante d’Italia in Providence grew up in the Abruzzi region, the heart of brodetto country. “I do make brodetto, but it’s not a menu staple,’’ says the chef. “I make it with local seafood, such as scrod, haddock, calamari, tuna, scallops, swordfish, and salmon. I cook it in the traditional Italian method: in a terra cotta pot in the oven. That allows the minerals and liquids in the fish to come out slowly. That’s what makes the sauce so flavorful.’’

The peasant dish has gone upscale at Bricco on Hanover Street. Chef Gianni Caruso, who’s also from Abruzzi, includes half a lobster in each bowl. It’s a crowd pleaser in this Italian neighborhood, he says. “We sell a lot of it.’’ The dish also contains calamari, shrimp, mussels, Wellfleet clams, monkfish, and swordfish. The fish fumet is made with grilled asparagus and tart, colino tomatoes.

Brodetto typically has lots of ingredients, but the technique isn’t daunting. “After the New Yorker article came out, I had to try brodetto,’’ says chef Cindy Salvato, who runs walking tours of Providence’s Italian neighborhood, Federal Hill. Unable to find an English language cookbook with a recipe, she says, “I created my own.’’

Everyone in Italy does too. “You can scan Italy up and down, and you’ll find 2,000 recipes,’’ says Caruso. “That’s the beauty of brodetto.’’