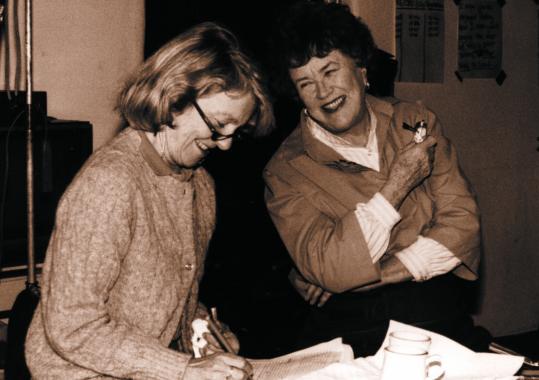 Judith Jones (left), who was Julia Child’s cookbook editor and longtime friend, has a new book due in September titled “The Pleasures of Cooking for One.’’ (Knopf)
By Janice Page Globe Correspondent / August 5, 2009

In the new movie “Julie & Julia,’’ opening Friday, Judith Jones is credited with discovering Julia Child. That’s not hyperbole. As a young editor at Knopf, Jones took a chance on “Mastering the Art of French Cooking,’’ then went on to guide more books by Child, James Beard, and many others. The two women remained close friends until Child’s death in 2004. Author of “The Tenth Muse: My Life in Food,’’ Jones, 85, has a new book due in September titled “The Pleasures of Cooking for One.’’

Q. What do you remember most about visiting Julia in Cambridge?

A. I remember she had this huge house and you never got out of the kitchen most days. And you didn’t want to!

Q. Do you agree that Julia “changed everything,’’ as the movie says?

A. Very much so. She made people see that cooking was fun and sensual. She made sounds that were delicious. She lifted the hideous Puritanism that had, particularly in New England, made food uninteresting. Suddenly everybody was “cooking Julia.’’ And then they were exploring the Middle East, China, India . . . she loved it all.

Q. Moviegoers might wonder why you didn’t show up for dinner with (“Julie & Julia’’ author) Julie Powell.

A. I didn’t know I was invited to dinner. I had agreed to come to her apartment because I wasn’t sure how you put a blog together and I also wanted to talk about recipe rights. . . . But the real reason I canceled is that Julia looked at her blog and didn’t think Julie was a serious cook. There were all these four-letter words - that isn’t how you describe food if you care and if you’re a good writer. Julia thought we shouldn’t have anything to do with it.

Q. Julia’s recipes get portrayed as rigid and haughty, but wasn’t she also forgiving and pragmatic?

A. She adapted to what we have in America and found substitutes. You didn’t have to go to 10 markets looking for a shallot; if it wasn’t there, it wasn’t there. . . . And she would have said “nonsense’’ to what’s going on today when they call for one sprig of fresh parsley, three fresh bay leaves. . . . You spend about $9 on what’s practically a decoration.

Q. What is the state of food and food writing now?

A. Julia really changed the way we wrote cookbooks. She changed expectations of what a cookbook should be. We’re still in an exciting time, but I’m not happy with most of the television shows. The Food Network says “we’re more than about food,’’ well, why do you want to be more than about food? Food is the greatest subject!

Q. What would Julia think of today’s rock-star chefs?

A. She was herself and spontaneous, where these guys are just pathetic. It all started with Emeril, and he was such a nice guy and such a good cook until they ruined him. But the response to this film makes me feel that more people are going to again discover the fun of cooking at home. You don’t do nonsense - dehydrating and rehydrating, all that kind of stuff - at home. You just do good cooking. Soigné, as Julia would say.

MORE ‘JULIA’ For more on the movie “Julie & Julia,’’ including interviews with Meryl Streep and Nora Ephron, see www.boston.com/ae.