The Wagon Wheel turns back time 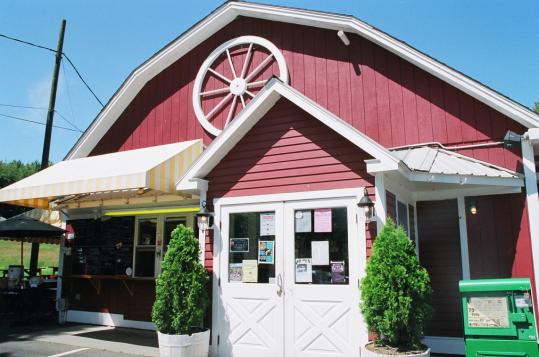 GILL - Carolann Zaccara comes from a restaurant family. Her parents own a steak house in Danbury, Conn., and an American grill in Kent, Conn. Her brother and sister own Hope & Olive, a fine-dining spot in nearby Greenfield. But when she and her husband, Jon Miller, decided to buy an old convenience store lot here on Route 2, they wanted to create something different. What they had in mind was an old-style drive-in.

The menu at the Wagon Wheel Country Drive-In is mostly simple - burgers, fries, ice cream, sandwiches, and soup - and the service is quick, but this is not fast food. “It takes a little longer than McDonald’s to get the food to you but I know that it tastes better,’’ Zaccara says. “We use whole ingredients and actually, for the most part, we cook from scratch.’’

Laurie Breitner of Westhampton appreciates this approach. She comes in for panini and hand-cut fries, sometimes arriving by bicycle from her home 32 miles away. “It’s great bike food,’’ she says, “it’s real food.’’ And it reminds her of the time when family-owned drive-ins lined the highways.

That nostalgia also inspired Zaccara. “I used to go to places like this with my parents when I was young,’’ she says. She and Miller opened the drive-in five years ago and built an addition on to the original space last year; they can seat about 70.

Barn-red outside and decorated with the obligatory old-fashioned wagon wheels, the restaurant sits on a two-lane section of Route 2 just a few miles east of Greenfield (and the Interstate 91 interchange). Summer traffic is heaviest on weekends, with Sunday breakfast especially popular. The restaurant serves three meals a day every day. An outdoor walk-up window lets people order and settle in at a shady picnic table. It’s walk-up service inside, too, which keeps prices reasonable. A wood-burning stove warms the place in winter and AC cools off hot summer days. But the bright yellow and white awning and the colorful chalkboard menu definitely make outdoor dining this time of year a real draw.

Zaccara and Miller built their menu around traditional items and specialties they could get locally. So among the many burger options are emu. “Right up the road, that’s where the birds are from,’’ Miller says, pointing toward Songline Emu Farm. Eggs, vegetables, ice cream, and more come from Franklin County suppliers Miller knows by name. Wagon Wheel relies on a food service for certain products, like regular beef burgers, but for $1 extra, customers can order a grass-fed beef patty from meat raised at Wheel-View Farm in Shelburne, a fourth-generation family-owned operation.

At one point, the Wagon Wheel owners ran a concession from a trailer at a flea market in Connecticut. That simple menu included egg sandwiches; the couple procured eggs, bacon, ham, and sausage from local farmers. “That’s kind of where we started sourcing out local stuff and figuring it was important to the local economy and it definitely tasted better.’’ Once they opened a place in the Pioneer Valley, it became an integral part of the business.

“The area out here is a lot more receptive to people using local products and a lot of people seek it out,’’ says Zaccara.

Barton Cove, a nearby camping and boating spot, sends in some diners. The Wagon Wheel is also popular with motorcycle riders, and Miller says during the winter some customers arrive on snowmobiles from a trail that passes behind the restaurant.

Snowmobilers know enough to bring cash. You can’t pay with a credit card.

“It’s mainly because I don’t like corporations,’’ Miller says. But he does capitulate to some customer demands. He added Coke to his soda offerings; originally only the many flavors of locally bottled Harmony Springs were available.

And now there’s an ATM.