THIS STORY HAS BEEN FORMATTED FOR EASY PRINTING
Light the Fire

Asado: a cookout that is more than a meal 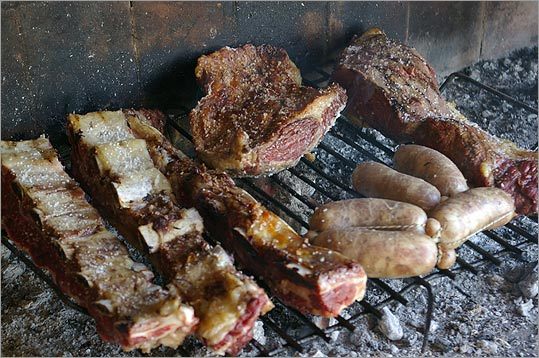 MENDOZA, Argentina - Paula Barraud, winemaker at La Mision, says that Argentines have a reputation for three things, "malbec, Maradona, and tango." Malbec is their widely recognized emblematic wine. Diego Maradona is their equivalent of Pele. And, tango, of course, is the sultry dance performed in the streets of La Boca, the capital's Italian neighborhood.

Yet, walk any street on a Sunday afternoon, and you'll discover that there's a fourth passion in this region. Aromas will direct you to asado. Large slabs of meat, seasoned only with salt, are roasting slowly over wood embers while hungry guests wait patiently. Martin Puebla, Argentine native and chef on Spain's Mediterranean coast, says, "Asado is the Argentine culture. Every Argentine in any place in the world eats asado." Puebla's girlfriend, Spanish native Ana Moreno Atencia, says, "If [Argentines] are living in Spain, they don't dance tango, but they do eat asado."

Asado is essentially a South American cookout. Served to small and large groups, this style of grilling vast quantities of meat over an open flame is based on the traditions of the gauchos, or cattle herders, who once roamed the grasslands of Central Argentina. Modern reunions demonstrate the influence of Mediterranean winemakers, who began arriving in 1885.

But asado is more than a meal. When several generations of large families or groups of friends get together, greeting one another with hearty embraces and multiple kisses, the meat may be the centerpiece of the meal, but the camaraderie is the most important event. Mendoza resident Betiana Antonietti says, "Asado not only refers to the beef . . . it is also the company."

This communal nature is woven throughout the culture. For example, mate, a bitter green tea, is consumed with friends - never alone. In a receptacle resembling a gourd, one member of the group places a metal straw and a handful of mate leaves. That person pours boiling hot water over the leaves and consumes the first brew. The steeping process is repeated, and the mate is passed to the next person. Each person takes turns drinking from the same vessel.

Like the word mate, which refers to both the utensil and the beverage, the term asado applies to the event and the beef. The cuts of meat here are larger and have more surface fat than their American equivalents. Individual steaks are far less common and often reserved for high-end restaurants.

The slow cooking process of asado melts the fat cap of less expensive pieces, giving way to tenderness and flavor. The grill master's technique is key; various components are placed on the parrilla, or grill, according to cooking time and order of consumption. Chorizo, the lightly seasoned pork sausage, and morcilla, a blood sausage, go on the grill first, and consequently are consumed first. Organ meats follow, and large cuts, often the showpiece, are the finale. The grillman will slice and offer up each piece immediately after removing it from the parrilla. In this way, the meal is served in rounds.

Accompaniments are straightforward, designed not to overwhelm the beef, nor take away from socializing. The fire is lit as guests begin to arrive, ensuring that the main event will not occur for several hours. In the meantime, invitees nibble on a variety of picadas made up of olives, salami, cured ham, and cheeses - all washed down with local beer. Andes and Quilmes brands of beer vie for the top spot; both are crisp, light lagers, served ice cold. Argentina's robust red wines, usually young malbec or tempranillo, were made for asado and thus reserved for serving alongside the entree.

To turn American cuts such as skirt steak, flank steak, brisket, and short ribs into asado, make a hardwood or charcoal fire and let it burn until half the wood has turned to glowing embers. Slide the embers to one side of the grill, placing the grate 3 to 4 inches above. Grill the meat directly over the embers while the remaining wood (or coals) continues to smolder. After the meat has cooked on one side and been turned, season with large-grain salt. Add condiments, like chimichurri, a piquant herb salsa, and mayonnaise, at the table.

Side dishes should be simple: sliced tomatoes, lettuce, ripe avocado, and shredded carrots, all sprinkled with olive oil and vinegar. Gather some friends, uncork the malbec, and light the fire.