Why a calorie isn't just a calorie

Fiber, fat, sugar, and water content make all the difference 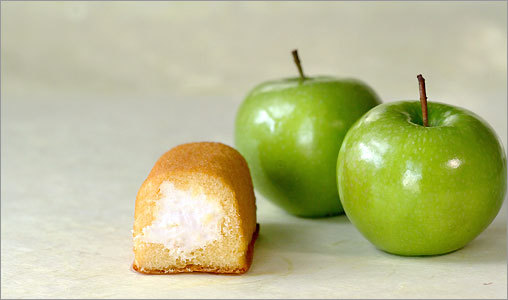 Back in ancient times, say the 1950s, dieting advice was almost universally limited to slashing calories. Our mothers bought countertop scales and booklets listing the calories in common foods with nary a mention of fat, saturated fat, carbohydrate content, or grams of protein.

Then, in the 1970s, the diet docs shifted our attention away from calories and promoted what were perceived to be more effective ways to lose weight by using the body's natural metabolic habits to burn our excess fat. Eating foods without carbohydrates, skipping animal fats, adding more protein, or consuming only "good" fats would lead us to leaner times.

Now, with a more recent, expansive two-year study of weight loss methods, the advice has come full circle: just count the calories. And on the heels of the results come experts who don't agree.

If you consider that a vegetable stir-fry with brown rice contains the same number of calories as a slice of lemon-meringue pie (around 350 apiece), does it matter if you skip the healthy meal and go straight to dessert? Or if you choose two apples over a Hostess Twinkie for a little 150-calorie pick-me-up, are you really better off? Some experts say that a calorie from fruit is essentially a "better" calorie than one from the carbohydrates in processed sugar and flour, not only because the fruit contains a variety of nutrients, but also because the volume and fiber of fruit will keep hunger at bay.

The study in question was conducted at Brigham and Women's Hospital as well as the Pennington Biomedical Research Center in Louisiana over two years with results published in the New England Journal of Medicine in February. It was considered an improvement over past diet studies because it was longer - many studies are conducted for just six or 12 months - and involved more than 800 participants, including a larger percentage of male dieters than is the norm.

There was no meaningful difference in weight loss among the participants, no matter which of four diets they were assigned to follow. The diets were based on nutritious foods with similar calories, but the ratio of fat, carbohydrates, and protein in the diets varied by group. The study's results, its authors note, prove that people should pick a diet they can stick with rather than take a one-size-fits-all weight loss approach.

"I'm not convinced that we know that a calorie is just a calorie," says Barbara J. Rolls, professor and Guthrie Chair of Nutrition at Penn State University. She and others in the diet field believe the study was too narrow in focus, sending mixed signals to do-it-yourself dieters.

Rolls and others note that while the study was published this year, it was actually designed many years ago amidst battles over the effectiveness of high-protein/low-carbohydrate diets such as Atkins and South Beach when compared with more traditional low-fat diets.

In the interim, numerous studies have been done on more effective ways to lose weight that focus on the regulation of hunger - a dieter's greatest obstacle - which can vary dramatically by the type of fat or carb in a food, the water and fiber content of what we eat, and possibly the timing and spacing of meals throughout the day. What triggers hunger signals to the brain is a lot more complex than the calorie counts in the foods we eat.

"I think the field has moved beyond thinking about macronutrients" - the primary sources of calories, namely carbohydrates, proteins, and fats, says Rolls, author of "The Volumetrics Eating Plan." Alcohol is considered the fourth micronutrient.

For example, her work focuses on the water content of food. Apples are a better snack choice than Twinkies not because your mother said so, but because fruits and vegetables have a higher water content, or lower energy density, than high-fat, high-sugar foods. Energy density is a measure of the calories per gram of food.

Susan Roberts, senior scientist at Tufts University's Energy Metabolism Laboratory, agrees that there is more to the science of losing weight than just counting calories. In addition, she notes, a large number of the dieters who participated in the two-year weight-loss study regained a portion of their lost weight at about the same rate, no matter which diet they tried.

"The real goal is to lose weight and never gain it back. Without doing it in a way that's sustainable is a waste of time," she says.

Roberts has developed a weight-loss plan based on research into the role of fiber in the diet, particularly its effect on hunger. Research at Tufts has shown that people who eat 35 to 45 grams of fiber a day are less hungry when losing weight and lose more weight than those who eat less fiber. The typical American diet contains only about 15 grams of fiber a day. So, for the same number of calories (about 550), you can have salmon, broccoli, lentils, and wine for dinner (about 14 grams of fiber), or two slices of pepperoni pizza (about 2 grams of fiber).

Alicia Hutton of Waltham, who is participating in a study of Roberts's fiber-rich diet plan and hopes to lose 50 pounds, remembers going to Weight Watchers with her mother at the age of 14. It was the beginning of a life of yo-yo dieting. "I would try whatever the latest study said or the latest fad," says Hutton, 35, who has followed the Atkins and South Beach diets, Jenny Craig, and the 5 Day Miracle Diet.

On each one, she was always driven to eat as much food as possible for the lowest number of calories without focusing on how quickly her hunger might return. "Not to pick on Weight Watchers," she says, "but I would eat one of their two-point ice cream bars. Ten minutes later, I'd want another bar."

At age 52, Marcia Schurer decided to take charge of her health and lose the 35 pounds she'd gained when she was in her 40s. With a background in food product development, she channeled her nutrition knowledge and lost the weight she'd gained in just six months, and has managed to keep it all off for four years.

She believes that news accounts of weight-loss studies are often oversimplified and can do more harm than good to those trying to lose weight on their own. "They are really turned into sound bites that make the message sound attractive," she says. She chronicled her experience and weight-loss methods in a book, "FitDelicious," which includes tools to help dieters know more about the foods they eat.

The book provides the nutritional data of foods based on the weight of their components rather than serving size.

For instance, you can quickly compare how sprinkling 3.5 ounces of dried cranberries on your salad instead of the same amount of deli ham will affect your diet. Items that typically go into a sandwich are grouped together, allowing you to glance at the calorie count of a meal you're creating from fresh ingredients.

"Sure, any calorie reduction helps to lose weight. But if you can't sustain that kind of eating pattern, it all comes back," says Schurer, who lives in Chicago. She has saved the packaging and nutrition labels from every food she's eaten in the last three years to study and categorize them. "It's one thing to cut calories. You have to have a good, healthy food plan if you're going to lose weight and keep it from coming back."

So that Twinkie might satisfy the urge the moment you devour it. But a little while later, you may find yourself reaching for another.

Mom was right. Go for the apples.

Which calories count most?

Check out these comparisons of different food choices in the same calorie-range, and tell us which ones you think give you the most bang for your buck.
Your comment is subject to the rules of our Posting Policy
This comment may appear on your public profile. Public Profile FAQ