Mapo tofu as it was meant to be 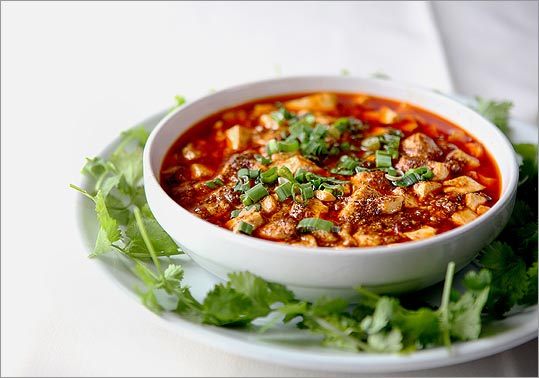 Mapo Tofu, FuLoon: The key is adding the ingredients in the correct order and getting the heat just right. (Wendy Maeda/Globe Staff)
By J. Kenji Alt Globe Correspondent / May 6, 2009

MALDEN - As soon as the waitress set down the bowl - a cloud of spicy, woodsy steam rising from a bubbling crimson pool with soft white curds of tofu just breaking the surface - I fell in love all over again.

I can't tell you exactly when my relationship with mapo tofu began, but I can tell you for sure that it was well before I had truly tasted it. My mother was never the greatest cook, but as a Japanese native transplanted to California as a teenager, her tastes were certainly more cosmopolitan than the norm. Our meals spanned the range between passable Swedish meatballs and chili rellenos, to excellent chirashizushi, souvlaki, and Japanese dumplings. Her mapo tofu couldn't be touched. It was a savory combination of silky soft tofu mixed with a generous portion of ground beef flavored robustly with garlic, ginger, and soy sauce. That became nearly custard-like, bound together with a glossy, cornstarch thickened sauce with a savoriness that could only be explained by the fact that she never put much credence in the MSG scare.

Though my infatuation with mapo tofu lasted all through my adult life, it was a few years ago at Brookline's New Taste of Asia that I realized that the mapo tofu I'd known was only a shadow of the real deal (sorry Mom). The same custard-smooth silken tofu was there, but the beef took on the role of seasoning. Gone was the thick glossy sauce, and in its place a glistening pool of chili oil. One taste and my tongue screamed for mercy before suddenly - and unexpectedly - being quietly sedated. It was a unique mixture of numbness and euphoria that can only be supplied by Sichuan peppercorns.

Contrary to popular belief, Sichuan peppercorns, which were banned from import into this country from 1968 to 2005, are not spicy on their own. Rather, they have a camphorous, woodsy aroma, and Novocain-like ability to numb your mouth as you chew on them. Together with the searing heat of red chilies, they form the backbone of Sichuan cuisine known as ma-la (numb-hot).

Sadly, New Taste of Asia closed its doors less than a year after my palate-changing experience and I spent several years wandering desperately from one Sichuan restaurant to another. I finally stopped at FuLoon in Malden, where chef Zhang Wenxue prepares the best version I've ever had.

To make the dish, he heats his wok. Then he adds oil and a handful of Sichuan peppercorns that sizzle and pop. "With Chinese food, the order you add ingredients and fire you use is most important," says restaurant manager Diane Tang, as Zhang stirs the contents of the wok, simultaneously using his knees to open the two valves that control oxygen and gas flow, giving a sudden burst of heat.

Zhang quickly adds ground beef, garlic, ginger, and fermented broad-bean chili sauce. "Most people make bad Chinese food because they don't learn correct order of ingredients," says Tang. Within two minutes, the chef transfers the stew to a hot bowl. "Ma-la is the first two keys of Sichuan food," she says. Tang, she explains, is the third. The word means "temperature heat." As she says this, hot chili oil slowly rises to the surface of the bowl. "Oil keeps heat in the dish. You can come back one hour later, and tofu will still be hot."

Tang is not quite accurate. What she means is that it will still take the roof of your mouth off.