Another winner at 5 Craigie 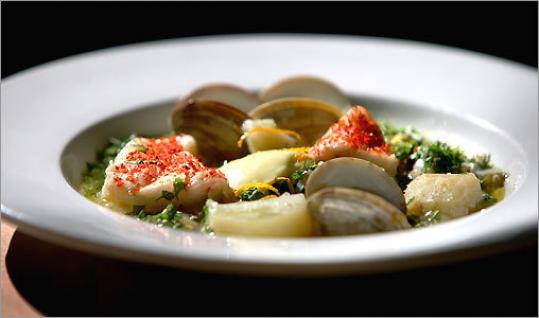 The Portugese seafood stew at Ten Tables Cambridge is well stocked with pieces of monkfish and Wellfleet littlenecks, and is submerged in a garlicky broth. (Wendy Maeda/Globe Staff)
By Devra First Globe Staff / April 22, 2009

By any rational measure, 5 Craigie Circle should be one of those cursed locations where restaurants always fail. It's in the basement of an apartment building, off the beaten path, with few parking spaces and a cramped kitchen that could test the most organized chef. But it seems surrounded by a karmic glow. Here, the Peacock had a run of nearly two decades. Cafe Celador and Butterfish won critical acclaim (though didn't match the Peacock in longevity). Craigie Street Bistrot grew and thrived, making a sow's ear into a tasty, fried sow's ear. And when the Bistrot became Craigie on Main and decamped to its new location, in moved restaurateur Krista Kranyak with a second branch of her Jamaica Plain restaurant, Ten Tables. Once again, 5 Craigie Circle attracts good food - and, on the nights I was there, plenty of people to eat it.

Twice as many people as the original Ten Tables, in fact. The Cambridge restaurant, which opened in February, would more correctly be called Twenty Tables - "and I feel it!," Kranyak writes in an e-mail ("Rockin out from my iPhone!"). There's a jumpiness in the air; things aren't quite settled. She and chef/co-owner David Punch are still working out the kinks of a new restaurant, juggling staff, tweaking menus, and finding their rhythm. (Sous chef Joshua Caswell mans the JP kitchen.)

If you've eaten at the JP spot, you can tell; the food and service in Cambridge don't yet feel as self-assured. If you haven't, you'll simply be glad to be eating the likes of Turkish-spiced red lentil potage or wonderfully light fluke crudo, boudin blanc, or striped bass wrapped in Serrano ham. (You can order a la carte or spin the wheel with a tasting menu, available in omnivore and vegetarian versions.) According to my eavesdropping, many patrons are here because they used to go to Craigie Street Bistrot, not because they followed Ten Tables; the drive can make Cambridge and JP feel light years apart. The new restaurant is thus poised to bring in a whole new audience for Punch's deceptively simple food. As much thought as clearly goes into it, it doesn't feel overthought.

The boudin blanc is served with spatzle, turnip greens, and carrots, a pleasingly rustic combination. Yet the sausage is ethereal rather than hefty, nearly melting in your mouth. It's made in house from Berkshire pork; Punch says later by phone that creating the links is incredibly time-consuming. It's worth it: This is one fantastic sausage. The spatzle are delightfully chewy. And the carrots are Chantenay, carnelian orange and sweet as candy.

The raw fluke is sliced thin and sprinkled with olive oil, sea salt, and chives, then plated with grapefruit sections and shaved fennel. It's not complicated, just the right amount of tastes and textures together, very refreshing. A spring salad performs a similar trick with not much more than butter lettuce, radishes, and peas.

The current menu straddles the seasons with those radishes and peas here, parsnips and turnips there, local when it makes sense. The salad comes with a crouton smeared with goat cheese from the Berkshires. An appetizer of squid is sauteed with green garlic, cardoons from California's Knoll Farms (tastes like artichokes, looks like celery), tender and meaty gigante beans, and tiny bits of crisped black olive that lend an appealing bitterness. Fettuccine is tossed "carbonara style" with native parsnips, peas, and pancetta. On one occasion this dish is disappointing - the handmade pasta far too al dente, and lacking the luscious creaminess that makes indulging in carbonara worth the calories. On another, minus the pancetta as part of the excellent vegetarian tasting menu, it's better; it's still a bit too al dente, but the sweetness of the parsnips and generous grindings of pepper come together addictively.

A Portuguese seafood stew is well stocked with pieces of monk fish and wonderful Wellfleet littlenecks; the broth is the best part, briny, garlicky from aioli, and flavored with fresh herbs. It is a small crime that the stew doesn't come with toast to sop up the broth.

The striped bass is wrapped in Serrano ham that crisps in cooking and flavors the white flesh. Staying firmly in Spain, the dish is served with ajo blanco, a white gazpacho made from almonds and bread, and romesco, another almond-based sauce, this flavored with red peppers. A sprinkling of pimenton, or smoked paprika, and asparagus complete the plate. One night the seasoning is off and the bass tastes a bit fishy; another the dish is excellent.

Alison Hearn, a former sous chef at the JP Ten Tables whom we last saw cooking at Myers + Chang, turns her attention to sweets here as the pastry chef. (She also waits tables in her down time - Ten Tables Cambridge is one of those ventures where everyone pitches in. Kranyak did much of the remodeling herself.) Her sticky toffee pudding is ooey, gooey goodness topped with vanilla ice cream. A chocolate terrine tastes deep and dark, where the Thai basil ice cream served with it is light, herbal, and sweet. The green notes combine intriguingly with the chocolate and grains of sea salt. Grapefruit gratin with Muscat sabayon is not nearly as interesting as it sounds; there's no discernible Muscat flavor the night we order it.

Ten Tables doesn't have a full liquor license, so its cocktails are wine-based. The Gaston 76, white Lillet with cucumber and tarragon, is the perfect drink for a summer evening. The cucumber is clean and crisp, while the tarragon lends a whiff of licorice. Red and white wine are available at $14 for a half-carafe, $26 for a full (the red better than the white on a recent night). The list of bottles is about half French, half not, with some very nice higher-end offerings but many priced in the $30s as well.

The restaurant feels less like a basement than in its previous incarnation, though there's only so much to be done with the space. The rugs have been removed, and the walls are painted a warm camel. Tables are close together, the tablecloths topped with butcher paper, and dim glass lights hang from the ceiling. Ten Tables Cambridge might just be the darkest restaurant in town right now; on my first visit, I thought they might have switched to a different entrance because the front door was so dark. A bit more illumination would help the eyes without hurting the mood.

Service is attentive, in one way too much so: Each table gets a bottle of water, but we never have the chance to pour it. On one visit it seems our waitress tops off our glasses each time we take a sip. Kranyak makes the rounds, a proprietor in the European mode, but on her own terms: tattooed, with rocker hair, a 30-something woman succeeding in what's often a male role. Mothers, bring your daughters here for the example as well as the food.

But mainly for the food. Ten Tables Cambridge is following in the footsteps of its older sibling, offering very good value for very good cooking, but its bigger size presents new challenges. Punch says he's on the verge of changing the menu, so the evolution continues. It will be interesting to watch the restaurant grow into itself.