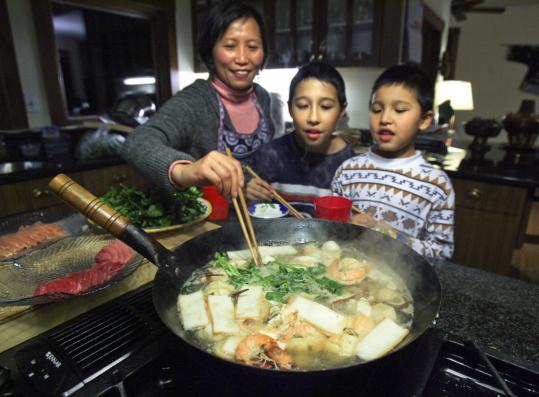 LEXINGTON - Cliche though it may be, East definitely meets West in the kitchen of Zhuqing Li and Ed Steinfeld's Victorian home. Li, 45, comes from Fuzhou, the capital of China's Fujian province; Steinfeld, 42, grew up in New Jersey. And though Li says she didn't learn to cook until she came to this country as a graduate student, today the family - Li, Steinfeld, and their sons, Daniel, 10, and William, 7, - enjoys Chinese meals nearly every night, prepared by Li. Steinfeld jokes that he's living a dream shared by many American Jews: Eating Chinese food on a daily basis.

The couple's different culinary heritages converge in a dish that appears frequently on their table: matzo ball hot pot. It's based on the traditional Asian hot pot that allows guests to pick and choose among raw ingredients, dunk them in boiling broth, dip them into a flavorful sauce, and eat the results. Typical ingredients include thinly sliced meats, seafood, vegetables, tofu, and dumplings. In this house, the pot also boasts matzo balls, the kind you find in bubbe's chicken soup (though Steinfeld notes that the pork and crabs in this soup would make his Jewish grandmother turn in her grave).

The sumptuous dish is a far cry from the food of Li's childhood. Exiled with her parents to the countryside during the Cultural Revolution, she recalls those "tough years" as a time when "there was not much food to cook." A special holiday - the New Year, for example - might bring a celebratory dish of white rice with lard. Ordinary meals consisted of rice and vegetables, especially sweet potatoes. Li came to the US to study sociolinguistics, but it was here that she learned to cook, too.

The hot pot seems simple, but it's not effortless. "It's all in the prep work," Li says, as she gets ready to make the dish. "Once that's done, you just sit and eat." But all that prep work requires attention and care. Pork, beef, and chicken breast are sliced paper-thin; Li suggests half-freezing the meats first to make slicing easier. Most Asian markets sell these items already cut for hot pot, in case your knife skills aren't all they could be. Shrimp are peeled and deveined (normally, Li would use head-on shrimp, but the headless ones work fine, too). Live crabs are killed and cleaned just before the meal (the squeamish can certainly skip this ingredient). Specialty items such as fish balls, shrimp balls, tofu skin, fried fish cake, and dumplings are also at Asian markets. For the dipping sauce, Li combines a commercial hot pot sauce and satay sauce, but a homemade version could be made with soy sauce, sesame oil, garlic, vinegar, and the like.

And, of course, there are the matzo balls. Steinfeld stirs up the batter beforehand, using a standard recipe; it must be well chilled to be formed into balls.

Once the prep work is done, the fun begins. Their kitchen is perfectly configured for hot pot, with a stovetop on an island where diners can perch on stools. Lacking that set-up, you could use a portable burner set on a table, or perhaps even a large fondue pot in a pinch.

Li begins the hot pot with boiling water, but says the dish is even better with chicken stock. The hot liquid is poured into a wok, and then everyone is free to start dunking. Steinfeld points out that there is a usual progress to the meal. You start with meat and fish items and move to tofu and vegetables. At that point, Li adds noodles. Matzo balls go in between the meat and the vegetables or thereabouts. If you happen to believe that one key to matzo ball success is to leave the pot covered while the dumplings cook, this would come as a revelation: After about 20 minutes in the wok, the hot-pot matzo balls are light and fluffy, and they fit perfectly into this cross-cultural feast. And even with a water base, the broth is rich and full-flavored by the time the noodles go in, thanks to the array of items.

The meal is a bit of a free-for-all, with Li, Steinfeld, and the boys dipping and dunking with abandon. It's social and highly interactive, and to Li, that's the beauty of it. Eat it with friends, she says. "When it comes to enjoying hot pots, it's the more the merrier."