THIS STORY HAS BEEN FORMATTED FOR EASY PRINTING
FAMILY TABLE 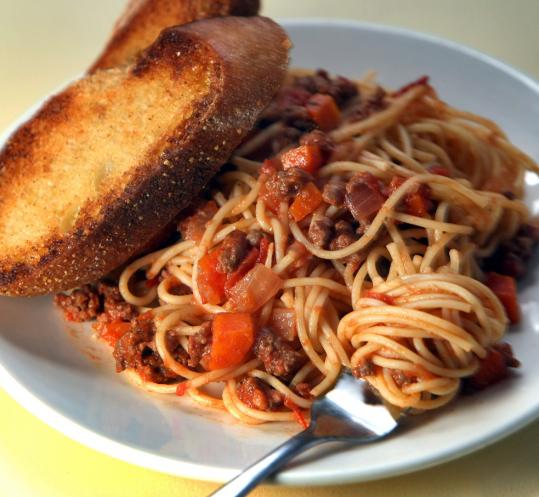 If you want a delicious, creamy Bolognese sauce on a weeknight, you probably don't have time to simmer it the traditional way - slowly in milk, which tenderizes and flavors the meat. One quick way is to use evaporated milk for a long-simmered flavor and depth after only 10 minutes. Start with ground beef that is no more than 85 percent lean; the extra fat means moist meat. Use plenty of garlic, thyme, and olive oil. Once the meat browns, stir in canned tomatoes and the evaporated milk and simmer the sauce while the spaghetti boils. Sure, it's not your grandmother's Bolognese. But you won't miss the extra hour at the stove.

1. Bring a large pot of salted water to a boil over high heat.

2. Meanwhile, in a large flameproof casserole, heat the oil over medium high heat. Add the onion, carrot, garlic, salt, and pepper. Cook, stirring often, for 8 minutes or until they soften.

3. Add the ground beef and cook, stirring often, for 5 minutes, or until only a little pink remains.

4. Add the tomatoes and milk and bring to a boil. Lower the heat and simmer the mixture for 10 minutes.

5. Drop the spaghetti into the boiling water and cook, stirring occasionally, for 8 to 10 minutes or until it is tender but still has some bite. Drain it into a colander.

6. Add the thyme and Parmesan to the tomato sauce. Taste for seasoning and add more salt and pepper, if you like. Tip the spaghetti onto a platter and spoon the Bolognese sauce on top. Keri Fisher