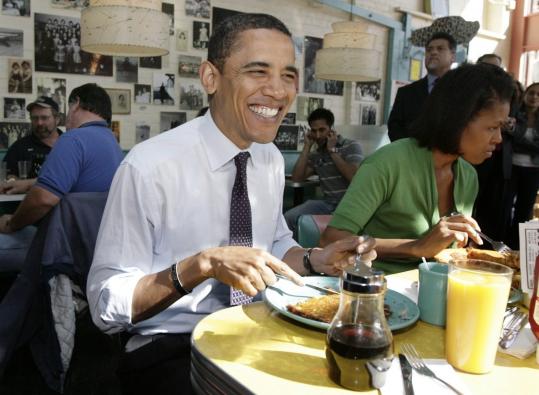 WASHINGTON - Visiting one of his favorite Chicago restaurants in November, Barack Obama was asked by an excited waitress if he wanted the restaurant's special margarita made with the finest ingredients, straight up and shaken at the table.

"You know that's the way I roll," Obama replied jokingly.

Rick Bayless, the chef of that restaurant, Topolobampo, says Obama's comfortable demeanor at the table - slumped contentedly in his chair, clearly there to enjoy himself - bodes well for the nation's food policy. While former President Bush rarely visited restaurants and didn't often talk about what he ate, Obama dines out frequently and enjoys experiencing different foods.

"He's the kind of diner who wants to taste all sorts of things," Bayless says. "What I'm hoping is that he's going to recognize that we need to do what we can in our country to encourage real food for everyone."

Phrases such as real food and farm-to-table may sound like elitist jargon tossed around at upscale restaurants. But the country's top chefs, several of whom traveled to Washington for Obama's inauguration last week, hope that Obama's flair for good food will encourage people to expand their horizons when it comes to what they eat.

These chefs promote locally grown, environmentally friendly and - most importantly - nutritious food. They urge diners, even those whom may never be able to afford to eat at their restaurants, to grow their own vegetables, shop at farmer's markets, and pay attention to where their food comes from.

Dan Barber, chef at New York's popular Blue Hill restaurant and a frequent critic of the country's food policy, says a few small gestures from the president and first lady Michelle Obama could accomplish what many of the chefs have been working toward for years.

"I recognize that I'm an elitist guy," says Barber, who cooked a $500-a-plate meal for incoming Obama aides and other guests at a small charity fund-raiser the night before the inauguration. "Increasingly raise awareness, but don't do it through chefs like me. . . . My advice would be more of a symbolic nature, and to not underestimate what can be done through the White House."

Barber said good food needs more publicity, and he hopes Obama and his wife will advertise what they are eating and what they are feeding their children, Malia, 10, and 7 Sasha, 7.

Many high-end chefs like Barber believe that most food in the United States is over-processed, over-subsidized, and grown with no regard to the environment, making it harder for small farms to make a profit selling more natural, nutritious food.

Barber cooks with food grown at his farm, the Stone Barns Center for Food and Agriculture in Pocantico Hills, N.Y. At the pre-inauguration fund-raiser, organized with several other dinners by food guru Alice Waters, passed hors d'oeuvres included carrots, lettuce, and cauliflower - untarnished and raw. Most of the chefs say they realize food policy and government support for larger corporate farms won't change any time soon. Congress, with Obama's support, overwhelmingly enacted a $290 billion farm bill last year that directs many subsidies to the largest agricultural players.

But Obama has already given chefs like Barber a small reason to hope. At his confirmation hearing, Agriculture Secretary Tom Vilsack made an overture to the growing number of food groups and specialists who have criticized government subsidies for large corporate farms, saying he will seek to work "with those who seek programs and practices that lead to more nutritious food produced in a sustainable way."

"There's a lot of work that can be done in this area," Vilsack said after he was sworn in.

Other chefs in town for the inauguration and Waters' dinners had many suggestions to improve food policy. Daniel Boulud, the veteran New York chef of the restaurant Daniel who has cooked for at least five former presidents, said he thinks the Department of Agriculture should form an agency that exclusively oversees small farms.

Lidia Bastianich, a New York-based Italian chef who has starred in several cooking shows on public television, says the government needs to encourage regulations and incentives to small farmers to give them the opportunity to compete against the "big giants."

© Copyright 2010 Globe Newspaper Company.
FIRST 100 DAYS
Your comment is subject to the rules of our Posting Policy
This comment may appear on your public profile. Public Profile FAQ