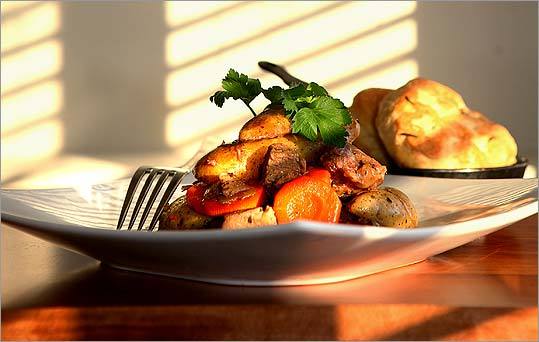 When the economy started looking bleak, restaurants around town began instituting dining deals. These days you'd be hard pressed to find an establishment that doesn't have one, often named something as subtle as "economic stimulus menu." It's not a good sign for the financial situation, but it does offer diners a few bright spots while attracting business to restaurants that need it more than ever, particularly on weeknights.

But are these deals really deals, or do you get what you pay for? We sampled several to find out.

The results: For the most part, these menus stack up well, offering good food at good prices. Dishes rely more on inexpensive ingredients, or feature luxury in small amounts - lobster sauce instead of lobster, truffle oil instead of truffles. We found a lot of stews, potatoes, and cassoulets. In exchange for a low price tag, diners generally give up a bit of variety, and sometimes a bit of refinement.

We were curious to see if we'd be treated differently due to our low tab and its attendant low tip. At several places we asked for "the cheapest glass of wine, please" and stuck to just one, skipping coffee. No one batted an eye or tried to steer us toward more expensive options, except for one case, at Pigalle, when the wine we'd asked for was clearly wrong for the dish. Service was as friendly and professional as ever. For now, at least, we're all in it together.

Read on for the details.

51 Lincoln wins for most creative deal. The restaurant is offering a "51 State Economic Stimulus Package." (They're counting Puerto Rico.) Each week, chef Jeffrey Fournier creates a three-course meal focused on one state, going in alphabetical order.

For Colorado, the meal starts with potato pancakes with sour cream, goes on to lamb stew with "ranch-style pan bread," and ends with muffin cakes with honey and whipped cream. What makes that Coloradan? Apparently the state is a major producer of potatoes and lamb.

The potato pancakes are enormous and hefty but disappointing; they need seasoning and are a bit overcooked. The stew is the highlight of the meal, a satisfying serving of tender meat, potatoes, and carrots; pan bread, in a mini skillet on the side, tastes like Midwestern naan. Dessert feels like more of the same - another skillet of what is essentially sweeter, lighter pan bread topped with popcorn brittle. It would be great to have lighter bookends for the hearty stew; does nobody in Colorado eat vegetables?

Though we wish for better balance in Colorado, 51 Lincoln's menu changes frequently. This week is Connecticut: local fish soup; roasted cod with clams, corn, and new potatoes; and Hartford cake, a kind of fruitcake. Next, Delaware: crab puffs, roasted blue hen with roasted winter vegetables, and pumpkin pie. If that doesn't suit your state of mind, the regular menu is a good value unto itself.

At $29, this is one of the most reasonably priced dinner deals around, substantially less expensive than the average dinner here. But we feel as welcome as if we're paying full price. The valet is doing "great!," the host is Paxil affable, and the chef visits each table, shaking hands and thanking us for coming.

The food makes us feel welcome too. This menu offers several choices, and though the dishes play it safe - chicken, salmon - all of the food is elegantly plated and well prepared. A salad of organic mesclun greens is dressed with a white truffle and balsamic vinaigrette; mussels are some of the best I've had anywhere of late.

For dessert, the choice is chocolate mousse or sorbet. Sorbet comes in strawberry, lemon, and apricot. They're icy and too sugary; the mousse is much better.

With the check the waiter gives us each a coupon for $10 off our next meal. When we leave, the host hands us another. It's nice to feel wanted.

Hamersley's is shockingly busy on a Monday night. Hasn't anyone told these diners there's a recession on? The bistro has gotten the message, however, instituting a new prix fixe.

The first course is a little salad of endive and watercress, bitter and peppery and crunchy, augmented by plenty of perfectly balanced vinaigrette. Very bistro-y indeed.

Guests choose between two entrees; the offerings one night are cassoulet and flounder. The flounder is rolled around julienne vegetables and mushrooms, served in a festive post-New Year's Champagne sauce. Where it's delicate, the cassoulet is hearty, a filling serving of beans, pork, duck confit, and garlicky sausage. For dessert, a pear upside-down gingerbread cake with amazingly delicious sugar-encrusted cranberries - what, as a child, you imagine a sugar plum must be like before you know better.

Everything is good, though not quite hitting the refined-rustic highs of the regular menu. For $10 or so more, you could still have salad, dessert, and in between Hamersley's famed roast chicken.

Budget gastro-travelers have long known that lunch is a good way to experience an expensive restaurant without completely emptying the wallet. This is the case here. Though the six-course degustation might be the way to go for the true L'Espalier experience, the so-called power lunch is excellent for those with shorter attention spans or smaller stomachs. Should you be in a hurry, they'll have you in and out in an hour; otherwise, you can take your time.

The menu might include a tiny fluff of goat cheese souffle, the size and shape of a petit crottin, alongside a colorful salad of roasted beets cut into rectangles. Then a pitch-perfect lamb daube with a flaky little biscuit. Dessert is "chocolate decadence cake," a finger of flourless richness with a quenelle of mango sorbet, the plate scattered with pomegranate seeds.

It's all lovely, and just the right amount of food, perhaps the first time I've eaten at L'Espalier and not needed to lie down afterward. There's no doubt the power lunch is a good deal. If you want to keep it that way, take the T. Parking at the Mandarin Oriental costs as much as your three-course bargain.

Chef Todd English may be a national commodity, but his Olives still feels like a neighborhood hangout. The cozy bar is a popular gathering spot, but during the week the dining room is fairly empty. It's the perfect time to take in the view of the Zakim bridge and the $35 prix fixe.

A first course of tagliatelle is the size of an entree. It features fresh pasta that's been tossed in truffle butter, giving off a heady aroma. Topping the pasta is a deep brown, nutmeg-laced Bolognese. Mussels are served out of their shells, with a saffron aioli that bleeds into the garlicky broth.

The vegetarian entree is unusual, a large chickpea pancake with vegetables stacked on top of it - red peppers, a good cucumber salad, and more. If you eat meat, you can do better. The wood-grilled petit filet mignon tastes more like pot roast, but it's still quite good; it's served with deeply flavored, tomato-y sofrito atop bruschetta.

Dessert is an uninteresting chocolate and butterscotch pudding or the much-more-interesting brown sugar and cinnamon panna cotta. It's gelatin-heavy, but the flavor is good, and it's topped with an appealing apple cider gelee.

Service is great, parking easy; all in all, a satisfying evening.

If you're not having one of the chef's tasting menus, you're having Pigalle's $40 stimulus menu. It's the only other option. Its price tag is a bit misleading; several dishes have supplemental charges. Depending on what you order, it could be the $58 stimulus menu. Even the French onion soup has a $3 addition.

It's worth it, though; it's an excellent rendition of the French classic. A lighter option, a terrine of roasted beets, beet gelee, and horseradish fromage blanc, is zingy, refreshing, and unusual.

There's no extra charge for the cassoulet, a dish Pigalle is known for. It contains duck confit, braised lamb shank, and sausage, plus plenty of beans. Unfortunately, it's slightly underseasoned, and the lamb is on the tough side. Coq au vin makes up for it, nicely cooked with strong flavors. For dessert, vanilla bean creme brulee is just right, a cracking sugar crust and smooth custard.

Despite the additional charges (they're tacked on to half the appetizers and two of the entrees), Pigalle's menu has the advantage of choice. And you can stick to the $40 price tag if you don't let a beguiling but more expensive option turn your head.

T.W. Food's prix fixe is the best of both worlds. It lets you save money, and you can choose any starter or main from the a la carte menu. For dessert, you get what's offered with the seven-course tasting menu that night.

Entrees are plated elaborately. Fresh saffron pappardelle are coated in an intriguing blood orange-onion sauce. Surrounding the noodles are dollops of sweet-sour endive, turnips, and celery root, as well as segments of blood orange. It's a wonderful, inventive dish. Grass-fed beef is served two ways, as rib-eye and roulade, with porcini custard, sauteed savoy cabbage, and armagnac-peppercorn sauce. Dessert is a chestnut cake with caramel ice cream that tastes a bit too much like burned sugar. It's a good dessert, but not quite as interesting as the rest of the meal.

This recession-era prix fixe doesn't feel like any less of a treat than the regular menu.