The greenest of them all 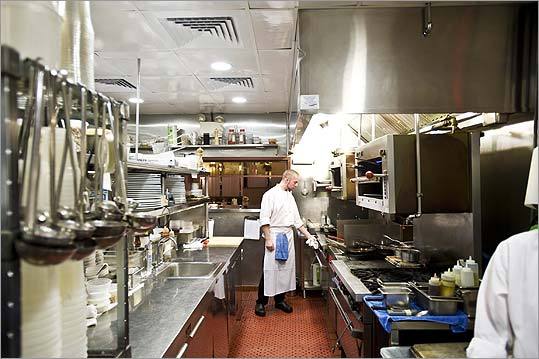 1. Sinks Lumiere uses low-flow spray nozzles to save water. 2. Lights Fluorescents do the trick in the kitchen, and use a lot less energy than standard bulbs. 3. Grease Waste not, want not. Used frying oil gets picked up and passed on to people who fuel their cars with it. 4. Local food Fish and meat don't travel far. During the growing season, the fare at Lumiere is almost entirely local. (Wiqan Ang for The Boston Globe)
By Devra First Globe Staff / December 3, 2008
Text size – +

Americans love restaurants. This year it's estimated we'll spend $558 billion dining out. But restaurants also eat resources. They account for 33 percent of all US retail electricity use, and the average restaurant goes through 300,000 gallons of water a year.

"In the beginning, people said 'What is this?' " says executive director Michael Oshman. "But it's now gone from 'Should we do this?' to 'How should we do it?' " The establishments adopting these measures are increasingly mainstream. "You've got Batali, Tavern on the Green. You've got . These are not hippie, crunchy-granola restaurants."

Boston is the GRA's second-most active city in terms of certification, after New York. Restaurants from the upscale bistro Lumiere to the wrap-and-smoothie chain Boloco have the association's seal of approval. Many others are taking action on their own.

In part, they're doing so because it makes business sense. That's why Jose Duarte, chef-owner of Taranta in the North End, took his first green steps. The cost of diesel was going up, and he realized he could save money by converting his truck to run on cooking grease recycled from the kitchen. "I was thinking about saving money, No. 1, and then helping the environment. What could I do as a restaurant owner to maximize profit and minimize cost by going green?"

A lot, it turned out. Composting and recycling, for example, costs him 30 percent less than traditional trash service. It also saves large amounts of energy. By composting 63.7 tons per year, Duarte figures, he saves 10.19 metric tons of carbon equivalent, or 422 trips from Boston to New York in a Prius. By replacing one conventional light bulb with a compact fluorescent one, he says, he can save $35-$45 a year. "Do you know how many light bulbs a restaurant has?"

Caring for the environment also brings in customers, a point Oshman makes when he's trying to get a restaurant on board for certification. According to the National Restaurant Association, 62 percent of adults surveyed say they are likely to choose a restaurant based on how environmentally friendly it is.

Of course, it's not just about business. "People want to make change," Oshman says. "They think about their kids or their grandkids. They really want to do something for very human reasons."

Here are some of Boston's greenest restaurants, and what they're doing to earn that distinction. All are GRA certified.

Drink up. At Jose Duarte's North End restaurant, the wine list is biodynamic, sustainable, and organic. The restaurant is also eliminating bottled water, putting in its own carbonation and bottling system. And the straws are green - they're made from a corn-based polymer.

This is just the beginning. Even the business cards are made from 100 percent post-consumer recycled paper and printed with soy ink. But you can eat at Taranta without being aware of it. "It's a green restaurant, that's the way we do business," Duarte says. "If you want to know about it, we'll go the extra mile and let you know. But we mostly want you to come, have a great time, and enjoy yourself."

Duarte wears an organic chef's coat, uses LED candles (below) instead of wax, and composts. In doing the last, he sets an example for other restaurants. "You cannot say you cannot do it if this guy is doing it in 7 feet." He did manage to gain some room when his old water heater broke - he installed tankless water heaters. "It's on average $100 less in my gas bill consumption. I have a work space now where the old tank was. It's super win-win. That's how people have to look at this," he says.

The New England chain is opening its 15th store this month. That's a lot of carnitas burritos and Bangkok chicken wraps. All of Boloco's meat comes from animals that have been treated humanely, fed a vegetarian diet, and kept free of hormones and antibiotics. This is good for health-conscious customers, and it's also environmentally sound. "You don't have the impact of feedlots. Hog confinement areas are huge producers of animal waste that leaches into groundwater," says president and chief operating officer Michael Harder.

In its stores, Boloco uses highly renewable bamboo, paints low in or without volatile organic compounds, and PaperStone, a material with the hardness of concrete but made from recycled paper and an earth-friendly resin. Sinks feature water-restriction valves, and compact fluorescents light new stores. Boloco is working with manufacturers on other lighting solutions. New stores also get Energy Star refrigeration and heating systems where possible. Boloco has eliminated Styrofoam; instead of plastic, the restaurants use cups made from corn (above) and bowls made from bamboo fiber. Harder says they're trying to find an affordable alternative to plastic flatware, which would enable them to compost: Then they won't have to worry about customers tossing plastic forks in the wrong bin.

"Our mission is to buy from local farmers and fishermen," says Jim Solomon, chef-owner of the Brookline restaurant. "Our products are not trucked long distances. We've got mushroom foragers coming in the back door (below right, with Benjamin Maleson); Pat Woodbury is our clam digger from Wellfleet. We use produce from Ward's and other local farms. We buy really just from New England."

Solomon's father wrote speeches for George McGovern, and Solomon says he's always believed in social and corporate responsibility. An eco-friendly restaurant was a natural extension of that. He began by eliminating Styrofoam, getting serious about recycling, and adopting energy-efficient lighting. Some lights are on timers or motion detectors. The Fireplace recycles its frying oil, which is picked up by a company that uses it for fuel.

Solomon had film installed on the restaurant windows that blocks out UVA and UVB rays; it traps heat inside during the winter and keeps it out in the summer. In the spring, they'll paint the roof with reflective paint, which will deflect heat and lower air conditioning costs.

UPSTAIRS ON THE SQUARE

Co-owners Mary-Catherine Deibel (left) and Deborah Hughes believe their guests can share. They frequently host private events at their Harvard Square restaurant, and they used to print a special menu for each guest. "It was so much menu paper," Deibel says. Now they print one for every two or three guests, with a note at the bottom explaining that they're part of the GRA.

"The GRA does a lot of research and legwork for you," she says. "They make it seem possible instead of overwhelming."

UpStairs on the Square is going to be producing its own bottled water, and the restaurant is moving toward composting. As Deibel and Hughes replace equipment, they're installing more energy-efficient versions. "Everybody is starting to think in more green ways," Deibel says.

One thing that isn't new is their local sourcing. "My partner always had relationships with farmers, way before it was so in vogue," Deibel says. "Now everybody's doing it. That's because it tastes better."

The menu here is environmentally friendly. Literally - it's printed on paper high in post-consumer content. Chef Michael Leviton has always showcased local, sustainable ingredients at his West Newton bistro. "During the height of the growing season, we're almost entirely local," he says. Fish doesn't come from any farther than Chesapeake Bay, meat comes from North-east Family Farms (below), and chickens come from southern Quebec.

Lumiere also uses recycled paper towels and environmentally friendly to-go containers (above). Fryer oil is picked up by a company called Green Grease Monkey, which converts vehicles to run on waste vegetable oil. And the restaurant composts. "We compost and recycle everything, so our trash footprint is pretty small," Leviton says.

As for lighting, it's fluorescent, but not in the dining room. At a restaurant called Lumiere, some green measures just won't fly.