When the economic times get tough, the tough cuts of meat get popular 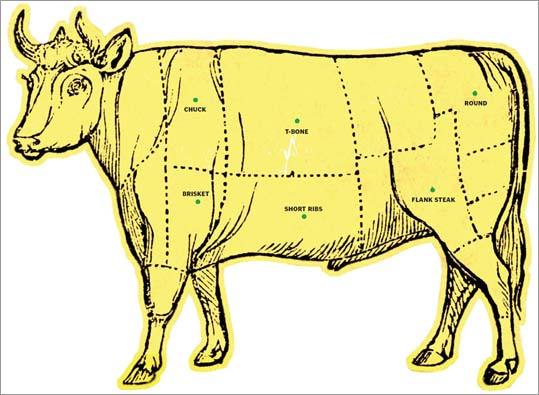 "Forget your choice steaks, your rack of lamb," Silva says. "I sold a couple today for birthdays, and that's all you're going to get."

Meat is a relatively expensive way to feed the family, and people looking to cut costs in a bad economy are buying less of it. The amount of beef sold nationwide decreased 2.4 percent for the month of September, according to numbers from the Beef Checkoff, a marketing and research program. Lamb and veal sales were down 17.1 and 16.9 percent respectively. (Bad news for chickens, but good news for poultry farmers, is that chicken sales were up 5.1 percent.)

"I'd say probably from the beginning of September there's been a marked uptick in the amount of lesser-priced steak sold," says John Dewar of T.F. Kinnealey & Co. Meats. "Come the weekends, people are still buying the sirloin, the rib, but it's more of a treat. We've had customers say to us, you don't see us during the week so much because we go to the supermarket and buy things on sale. They're eating more frugally during the week and splurging on weekends."

It's not just retail. Wholesale is down, too. "We're seeing a downward trend in the amount of product restaurants are buying," Dewar says. "They're serving less customers. One of the indicators of the amount of revenue the restaurants generate is sales tax. In September it was off 6 percent. That's a pretty healthy amount." Indeed, a Food Marketing Institute report released earlier this year found that 71 percent of Americans are cooking at home more and eating out less.

So what are they cooking? There are plenty of cuts available that taste great but cost less. Consumers often pay more for tender steaks, but tougher cuts offer deeper, beefier flavor. (Likewise, dark meat chicken is cheaper and more flavorful than white meat.) To satisfy a steak craving without breaking the bank, Dewar recommends the hanger steak, a relatively flat cut that hangs between the rib and the loin. "Historically it's been called the butcher's steak," he says, because the butcher often took it home for himself; there's only one per cow, with two separate sections.

"It's a tender piece of meat with a nice flavor profile and a nice shape sliced on the bias," Dewar says. It's a classic cut for steak frites, and good on the grill. Dewar also recommends the skirt steak, a similar cut. (He's not a fan of flat irons, however: "I think the key word in that is 'iron.' ")

Silva recommends buying steak tips. "The cost is down around $5.99 to $6.99, and you can do almost anything with it," he says. "You can stew, stir-fry, braise, flatten it out and do sandwiches."

Of course, as temperatures go down, so do steak sales. "People buy more steaks in summer for barbecues," says Tony DeBenedictis of Tony's Market in Roslindale. "Now it's cold, they barbecue a little less." The season for slow cooking is rolling in, and that's economically convenient. Chuck costs less, and braising and stewing melts its toughness.

"Until this thing rights itself, everybody's worried," says Silva, who has noticed a slight increase in theft at his store. "I can see it in their faces. It's tough out there. There are inexpensive cuts. Don't be afraid to buy them.

"Chuck makes a great pot roast, and it goes a long way. Pork roast is still nice and reasonable. People are afraid to buy a little more. Take onions and peppers and do a great stir-fry with the leftovers. My wife takes lamb or beef, orzo, and tomato sauce, and bakes it. You can get more out of it. We waste so much."

We also eat so much. The USDA recommends that women ages 31 to 50 consume 5 ounces of food from the meat and beans group each day, and that men in the same range eat 6 ounces. (This group includes meat, poultry, fish, dried beans or peas, eggs, nuts, and seeds.) A serving size of 3 to 4 ounces of meat is about the same size as a deck of cards, considerably smaller than the behemoth steaks and chops that often sprawl across our plates. Opting for smaller serving sizes of meat and augmenting them with more vegetables and grains is a good way to save money, but it also happens to be good for us. (Not all belt-tightening measures are bad.)

Cutting back on meat may also be good for the environment. According to Rajendra Pachauri, chair of the UN Intergovernmental Panel on Climate Change and a vegetarian, 18 percent of greenhouse gas emissions come from animal production. In September, he suggested everyone opt for one meat-free day a week to reduce greenhouse gases, an idea that drew criticism from the meat industry.

For those not inclined to embrace meatless days any time soon, there is some light at the end of the tunnel. Dewar says meat prices look to be going down. "We usually are all booked for our holiday meat right through the first of the year by now," he says. "We haven't booked any. We're thinking prices are going to take another downward move, then we'll step in and buy product."

Until then, all things in moderation. "Once in a while, you want a piece of steak, why not?" DeBenedictis says. "But the best is pasta. I love meat, but I enjoy pasta more." 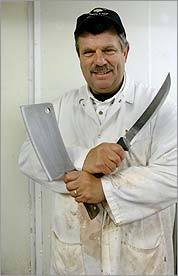 (Wendy Maeda/Globe Staff) "My wife takes lamb or beef, orzo, and tomato sauce, and bakes it. You can get more out of it. We waste so much," says Charles Silva, owner, New England Meat Market.