Only ewes can make great cheese 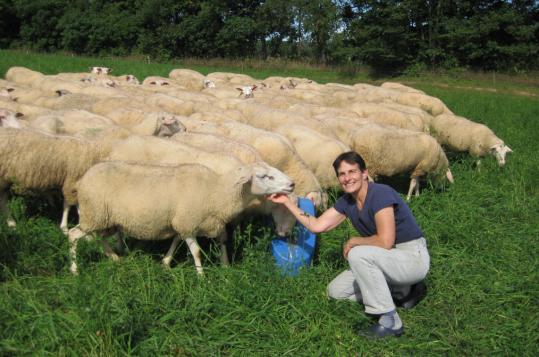 Cheesemaker Karen Weinberg with her East Friesian ewes at her farm in Shushan, N.Y. (Stephen Meuse for the boston globe)
By Stephen Meuse Globe Correspondent / October 29, 2008

SHUSHAN, N.Y. - The Battenkill Valley in New York's Washington County was settled in the 1840s by Scots-Irish immigrants and their sheep. Over the decades, rams and ewes gave way to the dairy cattle that now dot the landscape. But on a stretch of Route 61 in tiny Shushan, a scant four miles from the Vermont border, sheep are staging a mild and woolly comeback.

At 3-Corner Field Farm, the husband and wife team of Paul Borghard and Karen Weinberg, both 54, manage a flock of 120 East Friesian sheep on around 100 acres of varied terrain. The couple - native New Yorkers and former Manhattanites - bought the property in 1990. They produce award-winning fresh and ripened farmstead cheeses and sell cuts of their pasture-raised lamb, as well as sheep skins, woolen yarn, and a line of milk-based soaps.

Customers can order online or by telephone, or just drop by the tidy property - although a personal welcome can't be absolutely guaranteed. "If I'm working, I may have to turn people away," Weinberg says. "The cheese doesn't wait."

Neither do milk-heavy ewes. Between April and September when lactation is vigorous, the day starts early with Borghard, a retired GE Capital executive with degrees in law and business, setting up for the first of the day's two milkings. Ewes, avidly grazing since sunup, come down from pasture and file into the milking parlor. During the hour and a half it takes to milk them, the electric fencing that will define their range for the remainder of the day is moved onto a fresh patch of field. The system of rapid pasture rotation guarantees the animals fresh graze every day. The woolly beasts browse down a lush quarter-acre of clover, timothy, and alfalfa every 24 hours.

Once Sweep the border collie has returned the flock to pasture, Weinberg combines chilled milk from the previous evening with the morning's still-warm production and heats it all to begin separating the curd. Then she'll sanitize molds, ladles, and curd-cutting knives. Cheese draining from the night before may need attention. "There's rarely a day that I'm not making cheese," she says. "It's pretty much a continuous loop with different stages."

The farm produces a fresh ricotta, the Camembert-like Shushan Snow, and Battenkill Brebis, a firm, Basque style wheel, among other cheeses. Pasture-fed lamb comes in a variety of cuts, including whole bone-in leg, chops, and kebab cubes, and as merguez or chorizo-style sausages.

Weinberg, who earned a doctorate in industrial and organizational psychology at the City University of New York, became interested in cheese while she, her husband, and daughters Zoe and Emily Borghard (now aged 12 and 20) were living in Paris in the late '90s. They bought their first dairy sheep in 2001, and Weinberg took short courses in cheese making at the University of Vermont. The couple used savings, and later sales, to establish the farm's infrastructure. The business sustains the household now, but as Weinberg puts it, "We don't take salaries and we don't get time off."

The farm's viability depends on twice-weekly trips to the Greenmarket in New York City's Union Square. Their refrigeration-equipped truck is loaded the night before and on the road by 1 a.m. At Greenmarket, Weinberg connects with lots of good home cooks, but restaurateurs come too. "My customers rave about the taste of 3-Corner lamb," says Dan Barber, owner of Blue Hill restaurant. He marvels at the consistency of the product, something that he says is particularly challenging for small-scale farms producing relatively few animals to achieve.

"There is a real sense of connection consumers get when they come to the market," Weinberg says. "It's something you just can't get at Dean & Deluca." 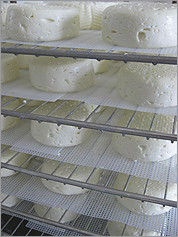