For Carrie Fisher, laughter is indeed the best medicine 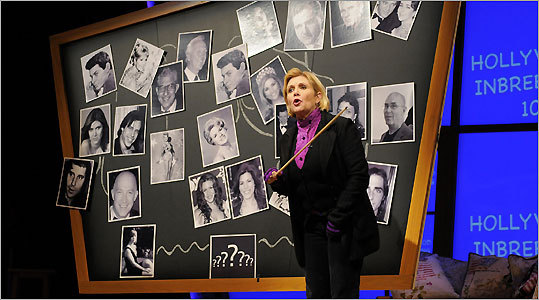 It would be hugely entertaining, if more than a little lazy, to review Carrie Fisher's "Wishful Drinking" simply by quoting one funny line after another. Fortunately for my professional self-esteem, however, I can't take the easy way out, because a lot of her funniest lines are simply not quotable in a family newspaper.

What I can tell you, if you didn't know it already from her widely recognized and enviable career as a novelist and screenwriter (and from her even more widely recognized if less enviable career as a subject of tabloid headlines), is that the Carrie Fisher who appears on the Huntington's main stage in this touring show is more than a few light years removed from Princess Leia. Yes, she's older, she's heavier, and she has a much less memorable hairstyle. She's also got a sharp tongue and an even sharper mind, qualities that George Lucas barely allowed in his "Star Wars" heroine.

Lucas comes in for a fair amount of ribbing as the sobersided creator of the "Star Wars" juggernaut - and, Fisher says, as the man who "ruined my life" by giving her that braided-donut coiffure and the goofy Grecian space robe to go with it. But while Fisher's fame as Princess Leia may be what draws some audience members to her show, it's only a small part of what will keep them laughing once they're there.

Sure, her riff on being turned into a Pez dispenser (among other humiliating offshoots of pop-culture immortality) is pretty damn funny. But it's nothing compared to the chalk talk she gives on her particularly tangled branch of the "Hollywood royalty" family tree. Starting with Mom (Debbie Reynolds) and Dad (Eddie Fisher), Fisher goes on to diagram the whole messy clan, with hilarious digressions on Elizabeth Taylor, Richard Burton, and Marie "The Body" McDonald along the way.

And then she really gets hilarious, with bits about bipolar disorder, alcoholism, being left by her second husband for another man, and having a friend die in her bed. Not funny, you say? Well, Fisher insists that it all is. "If my life wasn't funny, it would just be true," she says in the show's first minutes. "And that would be unacceptable."

So, she explains, she chooses to find a different perspective - a "funny slant" that's epitomized by the crazy angles and potpourri of props in Alexander V. Nichols's set for the show, augmented by his frequently amusing and always apropos projections of publicity stills, movie clips, and many of those tabloid headlines. Something tragic happens, Fisher says, and "you go to that funny slant, and that very same thing can no longer do you any harm." In short, she says, keeping a sane perspective on life is like being successful in real estate: It's all about "location, location, location."

Every once in a while, while gasping for air after a laughing fit, I'd find myself wondering if this is truly a useful way of dealing with tragedy, illness, and death. Aren't we supposed to probe our darker feelings, too, to delve into what harms us and bring it out into the light so we can deal with it and move on?

Well, first of all, it's not really any of our business how anyone else deals with her own problems - especially if she finds so engaging a way to spin them in public. Besides, I'd be willing to bet that, given all the time she's spent in therapy and various mental institutions (as she proudly declares), Carrie Fisher has probably done a bit of delving, too. And even if she hasn't, it's hard to think of anyone more entitled to keep away from the dark side.