Connecting with TV on the Radio 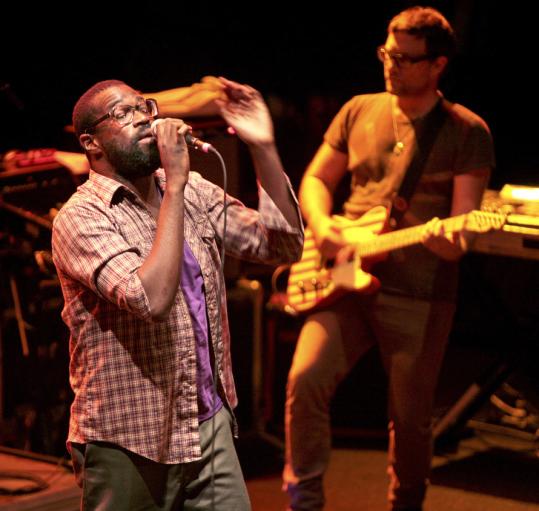 At the Wilbur Theatre, TV on the Radio performed songs from its new album, ''Dear Science.'' (aram boghosian for the boston globe)
By Joan Anderman Globe Staff / October 15, 2008

Like industrious children with a trunk of old toys, TV on the Radio cherry-picks pop sounds and uses its collective imagination to build something fascinating and fresh. Yes, it's rock 'n' roll. It's also gospel, noise, funk, ambient, alternative, post-punk, doo-wop, blues, and electronica. On Monday, for a full house at the Wilbur Theatre, TVOTR played a smart, serious set of songs colored by a rare confluence of playfulness and purpose.

The band is touring in support of its stellar new album, but the concert was a well-paced lope through the Brooklyn band's recordings - from the chaotic, erotic title track of 2003's debut EP, "Young Liars," to a big chunk of this year's "Dear Science." They touched on everything in between, recasting sludgy early work in the vital, brighter tones of this year's project with support from the so-called Benedictine Horns, a four-piece section wearing hooded robes that shuffled onstage from time to time throughout the night to blow in warm, swarming counterpoint over the fuzz and melody - most of it courtesy of TVOTR's sonic architect, David Sitek.

Sitek, a discreet mastermind, situated himself on the side of the stage, behind the horns, content to attend to his phalanx of pedals, keyboards, and electric guitars. A set of wind chimes dangled from the tip of his guitar; they made a small sound but a big statement about Sitek as obsessive cobbler of textures.

Onstage, Sitek's quivering glazes of guitar work (unburdened by ego or solos and often loosed in tandem with vocalist Kyp Malone's like-minded ax work) and his densely folded keyboards were the foundation for majestic rock songs that seemed to be made from fabric rather than notes and chords.

Frontman Tunde Adebimpe is a man of few words, but both he and Malone felt compelled to mention, in vague but unmistakable terms, mistreatment as visitors to Boston, referring to an ongoing struggle with racism that was addressed more boldly - and more hopefully - in forcefully euphoric songs like "The Wrong Way," "Crying," "Golden Age," and "Dancing Choose." Adebimpe shook, shimmied, and sang like he could point the way home on the sheer sway of his example.

Even more persuasive, though, was an encore performance of "A Method." The song's lyrics would have us believe that there is no such thing as a clear path out of the mire. But TVOTR's impassioned delivery on two wood blocks, two cymbals, and one sweet, searing organ told a different story - about the simple restorative power of song.

The Dirtbombs, a soulful garage band with two drummers, two bassists, and a certified punk streak, were the perfect opening act.

Joan Anderman can be reached at anderman@globe.com. For more on music, go to www.boston.com/ae/music/blog.