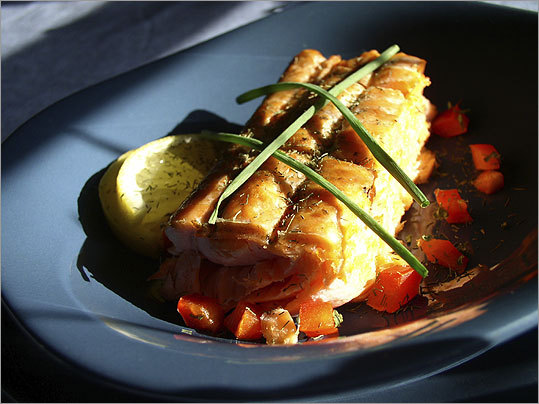 Besides moose, Sarah Palin is right at home with a nice piece of Alaskan salmon.
By Devra First Globe Staff / September 10, 2008
Text size – +

Who will you vote for come November? Sometimes you just need to go with your gut. You've weighed the candidates' positions and heard them speak, but perhaps you've failed to take into account one of the most important issues: what they like to eat. A politician's relationship to food can say a lot about him or her. Forthwith, a voter's gastronomic guide to the candidates, plus dishes from their hometown chefs.

John McCain
John McCain once told the Associated Press, "I eat almost everything. Sometimes I don't do too well with vegetables." Such as arugula? The Republican presidential candidate was unavailable for comment on his greens policy, but after the RNC, it's safe to say McCain enjoys red meat.

The other white meat, too, despite his opposition to pork-barrel spending. He was spotted ordering a pepperoni slice this summer, around the same time Obama ordered a vegetarian slice at a different pizzeria. And we know he likes ribs - he prepared them for the press corps at a March barbecue. His spice rub is one-third garlic powder, one-third salt, and one-third pepper, surprisingly mild for someone said to have a temper. Still, grilling for reporters shows he's not afraid of the heat. McCain wielded his own tongs: As a provider, he favors self-sufficiency over help from others.

Which is not to say he doesn't go to restaurants. The Wall Street Journal reports he visited one called the Asylum with several V.P. hopefuls and ordered calamari. The menu describes it in surprisingly elitist terms: "We've sorted out the rebel calamari & gleaned only the sophisticated. . . . On top, our intellectually appealing Calamari, underneath lies fresh baby spring greens." (What kind of greens?) McCain overlooks the rhetoric. It's surprising that he would accept rebel-free squid, but expect the unexpected from the maverick.

Also surprising: Despite his love of ribs, the Arizona senator has never been to Thee Pitt's "Again," a barbecue joint in Glendale. Co-owner Cheryl Wagner says if he did come in, they'd serve him his favorite, plus some pulled pork. Their rub and sauce recipes are top secret, but Wagner offers one for chili - a dish, it happens, Obama likes to prepare. Perhaps in the future, when the election is behind them, the two candidates can collaborate on a pot.

Barack Obama
You know the Democratic presidential candidate tracks the price of arugula and doesn't like sweets. But perhaps you weren't aware of his fondness for the Mexican food at Chicago's famed Topolobampo. This is no Tee Pee, a Phoenix restaurant serving nachos, enchiladas, and deep-fried tacos frequented in the past by George W. Bush. Topolobampo features James Beard Award-winner Rick Bayless's upscale take on regional cuisine, dishes such as butternut squash flan and marlin (Hawaiian!) in escabeche with roasted purple potatoes. So much for the melted cheese of the everyman (though Obama does have the support of the United Food and Commercial Workers International Union).

Still, Mexican food is McCain territory, too - Phoenix is just a few hours from the border. Does Obama's embrace of a cuisine that's a specialty of both his home turf and McCain's show a willingness to work across the aisle?

At Topolobampo, Obama never orders wine, says dining room manager Kevin Cary. So much for all those so-called "wine track" voters. He's not on the beer track, either, though. Cary says he always orders the house margarita - just one, with salt. Perhaps his appeal is to cocktail-track voters, which could mean people who drink anything from a solid G&T to a mojito. (An arugula mojito?) This bodes well for the swing vote.

Obama also orders the five-course tasting menu at Topolobampo, indicating a preference for slightly smaller portions he can share with more of his fellow diners. He doesn't order dessert, but he likes guacamole, lamb dishes, and mole, says Cary. The last - a sauce of many varied flavors and ingredients that combine to create something new - makes perfect sense. If the senator from Illinois-by-way-of-Hawaii-Kansas-Kenya-and-Indonesia were a dish, he might be mole.