Seeking the best box of bivalves 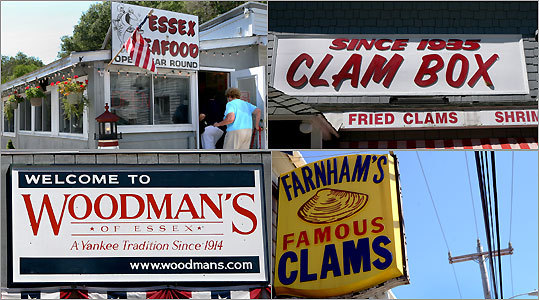 Labor Day approaches, and thus so does the end of summer. But for a short while longer, we can turn our backs on the inevitability of outerwear, shoveling, and homework. This weekend, plunge into the cool waters of denial and head for the beach, the bike trail, the ice cream stand. Summer's going to last forever. Of course it is.

A perfect way to prolong the season is a visit to one of New England's classic seafood shacks for fried clams: briny, sweet morsels in golden batter, preferably eaten at an outdoor picnic table. If there is a fried-clam epicenter of Massachusetts, it is Route 133 in Essex and Ipswich, and this weekend is the ideal time to indulge. Native clams became available again last month after a red tide outbreak earlier in the summer, the greenheads are no longer biting, and, post Labor Day, some establishments will begin cutting back their hours. (Clam prices are currently high, however, as flats were recently closed due to heavy rain.)

Four places along 133 vie for clam lovers' hearts. In Essex, you'll find Essex Seafood, J.T. Farnham's, and Woodman's. In Ipswich, there's the Clam Box. Each has its own distinct charms. But which has the best fried clams?

We decided to find out. It was a close contest, but here are the results of the 2008 Boston Globe Route 133 clam-off.

Howie and Debbie Lane have operated Essex Seafood for 13 years. In addition to serving everything from steamers to scallops to lobster rolls, they operate a fish market on the premises. ("If we cook it, we sell it!!!" the takeout menu says.)

The place has just the right seafood shack feeling, a basic, wood-paneled dining room in a small, gray-shingled building with an ordering window and serve-yourself condiments. There are picnic tables in back, but there's not much of a view - the food is the attraction here. If there is a well-kept secret on this traveled road, Essex Seafood is it. Unlike some of the others, it's not the kind of place where you'll spot many out-of-state license plates.

Essex's clams come mainly from Essex and Gloucester. They arrive frequently, as often as the tide allows. Unlike at the other establishments, Essex workers shuck the clams in-house. The batter contains a mixture of white flour and corn flour, a finely ground cornmeal; after clams are dipped, they're fried in lard, which gets filtered frequently and is changed twice a week.

Perhaps it was ready to be changed when we visited; upon picking up the tray, the first thing we noticed was its strong smell. Nonetheless, the clams were perfectly done, golden brown, and evenly coated. They were on the smaller side, but with nice, plump bellies. Nothing fancy, just good clams.

Onion rings were also good, perfectly flaky and golden. The tartar sauce here is made from scratch, but chowder is delivered from Boston Chowda Company. Guess what? It's pretty good, on the thicker side of brothy, with fewer clams than at some other places but with a deeper seafood flavor than others' chowder as well. And a bit off topic, but the lobster rolls here are immensely satisfying - tender, sweet lobster in a thin cloak of mayo piled into a lightly toasted, buttered roll. Like Essex Seafood, it's basic, and that's why it's good.

Operated by Joe and Terry Cellucci (they put the J. and T. in Farnham's) since 1994, this place isn't exactly a secret. The walls are covered in press clippings and Phantom Gourmet plaques. Farnham's reputation precedes it, and it mostly lives up to the hype.

You can eat at a table in the tidy little dining room or at the counter, but one of the best reasons to go to Farnham's is the view: a calming expanse of salt marsh and sky. The clams are no slouches either. Whenever possible, they're native, from two companies in Ipswich, Ipswich Shellfish Co. and Ipswich Maritime. Farnham's uses small to medium clams, as that's what the Celluccis' customers were accustomed to when they took over the place. (Smaller clams are actually more expensive than the biggies because it takes shuckers longer to free them from their shells; Farnham's uses a shucking house for this task.) When local clams are too big, they supplement them with smaller clams from Maine. The clams arrive six days a week, Monday through Saturday.

After they're dipped in a secret wash - it contains evaporated milk and other ingredients Farnham's won't disclose - the clams go into a batter that's 100 percent corn flour and fried in a combination of vegetable oil and beef tallow. (Note to non-beef eaters: You can also get them fried in pure canola oil.) They emerge a bit browner and crisper than at other places, with a nice contrast between the slight nuttiness of the coating and the soft, salty bellies. After sampling them, we were left with a slick of grease on our lips.

Oil here is changed frequently. Farnham's has 10 Frialators; after cooking in one for a few hours, they move on to the next. Onion rings are less flaky than Essex's. Chowder is made in-house and comes in plenty of varieties: clam, haddock, Manhattan scallop, and seafood. The clam version is nice and thin (down with gloppy chowder forever!) with lots of clam bites; the broth has more of an onion-and-potato flavor than Essex's chowder, with a thin layer of grease on top. Alas, there were a few gritty bites.

Advantage: Good clams taste even better with a view.

For fans of fried clams, a visit to Woodman's is like a US history buff's trip to see the Declaration of Independence. This is how it all began.

Woodman's, opened in 1914, claims to be the inventor of the fried clam. In 1916, legend has it, owners Lawrence "Chubby" Woodman and his wife, Bessie, discovered the perfect alchemy that is shucked clam plus batter plus lard. The place has done a hopping business ever since, and is still operated by the Woodman family.

Of course they use local clams from Ipswich and Essex, outsourcing the shucking. Clams arrive each day, are dipped in a corn-flour batter, and fried in lard, which is filtered and changed frequently. Chowder is made in-house.

After hearing reports that Woodman's had gone downhill, we were pleased to find quality still quite high (albeit on a low-volume night). Though the batter had much more of a tendency to flake off of the clams - aesthetically unappealing - this made the mollusks' flavor more prominent. The clams were sweet, plump, and large, although there were occasional gritty and chewy bites. Onion rings were a different breed altogether: smooth, shiny, crispy, and light. Unfortunately, they were glistening with grease, which diminished their other virtues.

The restaurant is bigger than the others, and a bit rowdier. On a Wednesday, there was live music in an adjacent building, drawing a crowd. Teenagers gathered in packs on the lawn by the picnic tables outside. It's fun, just less bucolic than your other options. And it's nice to have a larger choice of cold ones to wash down all the fried food.

Woodman's has made quite an industry out of fried clams - it's the only place of the four with a marketing department and an online press room offering story ideas. Despite the commercial overlay, it remains at heart a family business with long roots in the area.

Advantage: History and hard liquor (that would be a good name for a country album).

Aggelakis uses bivalves from Ipswich whenever possible. They're delivered daily by Ipswich Shellfish Co., already shucked. "It's a nice clam," Aggelakis says, "a small clam with a small belly and a nice small neck so it's tender and sweet." Clam Box also serves big-belly clams, which come from Savage Seafoods in Rowley. And Clam Box never, ever serves frozen clams, even when those are the only ones available. If Aggelakis can't get fresh, you'll find the Clam Box without clams. (This happened during a red tide crisis a few years back, and it almost happened this month because of shortages due to bed closures, but it's rare.)

The results are clam perfection: a batter that is light and just crunchy enough, allowing the taste and texture of the clams to come through clearly. They are sweet and tender. The oil is changed daily, and you can barely smell it on the clams. They simply smell golden and briny.

Chowder is fine, made from a base with added clams, half-and-half, cream, and milk. It's both thin and creamy, with lots of seafood and potatoes. Onion rings are adequate, crunchy rather than flaky. They're merely supporting players here. The fried clams are the star of the show.